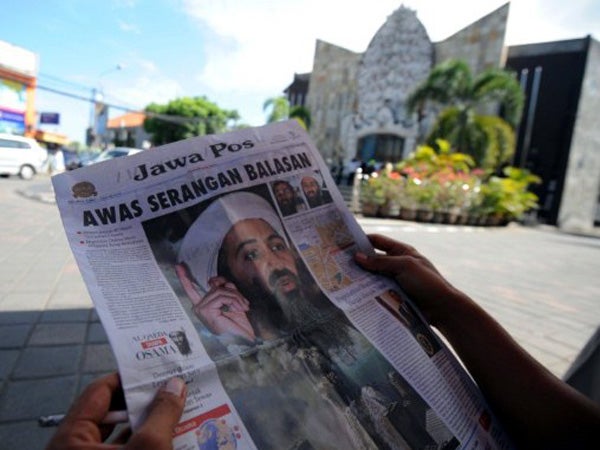 A man reads a daily paper with the headline reading ‘Watchout the retaliation’ at the Ground Zero Monument, a memorial to the victims of the 2002 Bali bombings, which had links to Al-Qaeda, in Denpasar on the island of Bali. Para Wijayanto, who was arrested Saturday,  is suspected of being involved in the making of bombs used in a series of attacks, including the 2002 Bali bombings. AFP

JAKARTA, Indonesia  — Indonesian police have arrested a man believed to be the leader of the al-Qaida-linked Jemaah Islamiyah network who has eluded capture since 2003, authorities said Monday.

National Police spokesman Dedi Prasetyo said Para Wijayanto was arrested Saturday by counterterrorism police with his wife at a hotel in the Jakarta satellite city of Bekasi.

Prasetyo said Wijayanto is suspected of being involved in the making of bombs used in a series of attacks, including the 2002 Bali bombings that killed 202 people and a 2004 attack on the Australian Embassy in Jakarta, Indonesia’s capital, that killed nine.

He said Wijayanto, a civil engineer who received military training at a jihadi camp in the southern Philippines in 2000, was also involved in the sectarian conflict in Poso, known as a hotbed of Islamic militancy on Indonesia’s Sulawesi island.

Since 2013, Wijayanto also has recruited and trained members of Jemaah Islamiyah’s military wing, sending some to Syria to fight with extremist groups, according to Prasetyo.

“He was appointed as amir (leader) of Jemaah Islamiyah because of his capability and track record as an Islamic fighter,” he said.

A convicted militant who now collaborates with Indonesia’s counterterrorism agency, Sofyan Tsauri, said Wijayanto became leader of Jemaah Islamiyah in 2007, replacing another militant, Zarkasih, who was arrested and sentenced to 15 years in prison.

Jemaah Islamiyah was banned by an Indonesian court in 2008. It was significantly weakened but not obliterated by a sustained crackdown on militants by Indonesia’s counterterrorism police with U.S. and Australian support.

Islamic State group attacks abroad have inspired a new generation of Indonesian militants despite the sustained crackdown on extremists.

In May last year, two families carried out suicide bombings at churches in Indonesia’s second-largest city, Surabaya, killing a dozen people and two young girls whose parents had involved them in one of the attacks. Police said the father of the two girls was the leader of a cell in a larger militant network that claimed allegiance to IS.