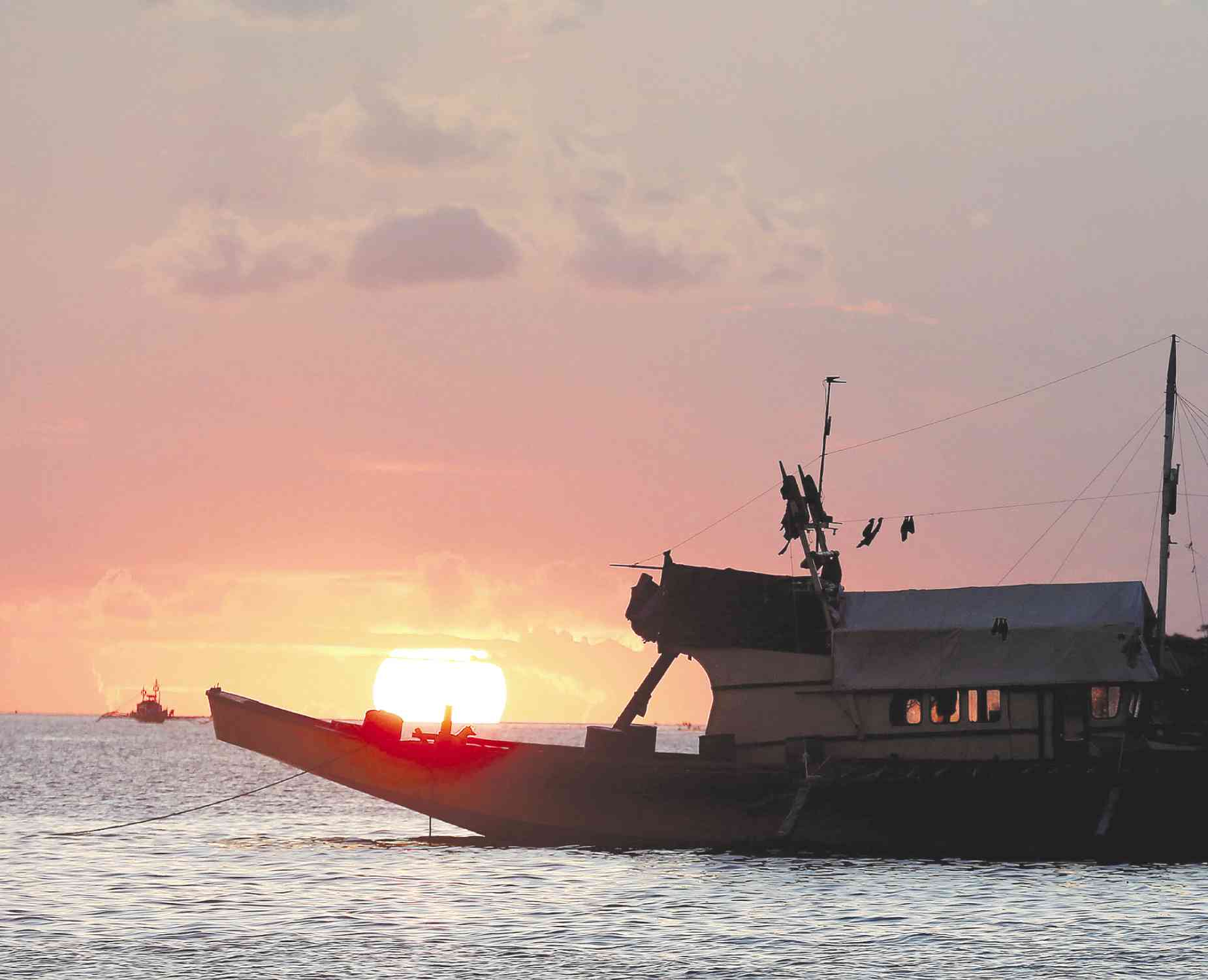 SUNSET FOR FILIPINO FISHERMEN Fishing boats wait at anchor off San Roque in Occidental Mindoro for another trip to Recto Bank. A fishermen’s group in Pangasinan province has decried the government’s willingness to allow the Chinese to fish in the West Philippine Sea. —RICHARD A. REYES

MANILA, Philippines — Lawmakers and maritime law experts on Wednesday shot down President Rodrigo Duterte’s idea that the Chinese could fish in Philippine waters because the Philippines and China were “friends,” pointing out that allowing foreign intrusion into the country’s seas is a violation of the Constitution.

The President, however, pushed back hard, saying his critics really wanted trouble by pressing him to ban Chinese fishermen in the West Philippine Sea, waters within the Philippines’ 370-kilometer exclusive economic zone (EEZ) in the South China Sea.

Earlier on Wednesday, Sen. Francis Pangilinan, a lawyer, said Recto Bank, where a Philippine fishing boat sank after being hit by a Chinese trawler that then abandoned the Filipino fishermen in the open sea on June 9, is well within the Philippine EEZ.

“It is ours. Allowing Chinese or other foreigners to fish there violates our Constitution. This is clear to all, especially to the 22 Filipino fishermen,” Pangilinan said in a statement, referring to the crew of the fishing boat, the Gem-Ver 1.

Although it authorizes the President to let foreign entities extract mineral resources, Article XII, Section 2 of the Constitution says the country’s marine resources can only be used by Filipinos, Pangilinan said.

The President’s controversial embrace of China has led to legally questionable proposals, including joint exploration for oil and gas in the West Philippine Sea, and to virtual recognition of China’s claim over Philippine territory in the heavily disputed waterway.

The Chinese trawler that hit the anchored Gem-Ver 1 was clearly encroaching on Philippine territory, but when asked on Monday if the government would bar Chinese fishermen from Philippine waters, the President answered that he didn’t think China would allow that, referring to China’s claim of historic right over nearly all of the South China Sea.

He then said the government could allow the Chinese to fish in Philippine waters because “we’re friends.”

No ‘friends’ in Charter

Sen. Panfilo Lacson, a Duterte ally who has criticized the President’s defeatist stance in the country’s maritime row with China, on Wednesday said the Constitution does not exempt the country’s “friends” from the prohibition against foreign exploitation of Philippine marine resources.

“Somebody please help me find the word ‘friends’ below,” Lacson tweeted on Wednesday, referring to the constitutional prohibition against foreign exploitation of Philippine marine resources.

The provision states, “The State shall protect the nation’s marine wealth in its archipelagic waters, territorial sea, and exclusive economic zone, and reserve its use and enjoyment exclusively to Filipino citizens.”

“The Philippine government cannot allow Chinese fishermen to fish in [the] Philippine exclusive economic zone in the West Philippine Sea because it will violate the Constitution,” the Supreme Court’s Justice Carpio said in a statement on Wednesday.

Carpio, who has done an extensive study of the maritime dispute between China and the Philippines, also reminded the military of its duty to secure the national territory, which “for purposes of our Constitution . . . includes our EEZ.”

As Commander in Chief, the President has the “constitutional duty” to direct the military to protect the nation’s marine wealth in its EEZ, said Carpio, a member of the Philippine legal team that successfully argued the Philippines’ challenge to China’s claim to nearly the entire South China Sea in the UN-backed Permanent Court of Arbitration in The Hague.

Responding to the criticisms on Wednesday evening, Mr. Duterte called Carpio stupid for opposing his decision.

“You know, Justice Carpio, you’re so stupid, that’s why you only reached that level,” Mr. Duterte said in a speech during the anniversary celebration of the Presidential Security Group in Malacañang.

“He’s from Davao. Even before I hadn’t been impressed by that fool. He has no rhyme or reason, like these senators, the opposition,” the President said.

China seized Panatag Shoal, known internationally as Scarborough Shoal, after a two-month maritime standoff with the Philippines in 2012.

Without military muscle to retake the shoal, the Philippines challenge China’s claim to nearly all of the South China Sea in the Hague tribunal in 2013.

Ruling on the case in July 2016, the tribunal said China’s sweeping claim had no basis in international law and declared that it had violated the Philippines’ sovereign right to fish and explore resources in its waters in the South China Sea.

China, however, ignored the ruling and blockaded Panatag Shoal. It eased the blockade after the President, who came to office two weeks before the ruling came down, arranged for access by Filipino fishermen to the shoal.

“They asked me, will you allow the Chinese to fish? Of course, that was our agreement before, which was why we talked. That’s why we were allowed to fish again. It was a mutual agreement,” Mr. Duterte said on Wednesday night.

Former Foreign Secretary Albert del Rosario, who headed the Philippine team in The Hague, on Wednesday expressed apprehension that the President’s pronouncement on Monday had negated the Philippine legal victory.

Defending the President’s remarks on Tuesday, presidential spokesperson Salvador Panelo said that by saying China would not allow its fishermen to be barred from Philippine waters, the President was referring to China’s claim of historic right to nearly all South China Sea waters.

Jay Batongbacal, director of the University of the Philippines Maritime Affairs and the Law of the Sea, on Wednesday said the Palace’s recognition of China’s claim was tantamount to the government’s renouncing the Philippine victory at The Hague.

Batongbacal said Mr. Duterte’s remarks on Monday were a violation of the Constitution and ran counter to the Fisheries Code, which penalizes poaching in Philippine waters. —Reports from Marlon Ramos, Dona Z. Pazzibugan, Leila B. Salaverria, Jhesset O. Enano and Jeannette I. Andrade

Read Next
PH retains Tier 1 rank in US index on trafficking
EDITORS' PICK
DILG to stranded workers: ‘Stay where you are’ until Luzon-wide quarantine is over
BREAKING: 1,075 people in PH has coronavirus disease – DOH
Style and music journeys with Claudia Barretto
UP-PGH wards for COVID-19 patients finished in 5 days
IATF: Food firms to operate with 50% of workforce during Luzon quarantine
Cebu City closes its borders
MOST READ
Tootsy Angara bares neighbor wanted them out of village
Pacquiao to seek probe on leaked private letter from Barangay Dasmariñas
BREAKING: 1,075 people in PH have coronavirus disease – DOH
593 health volunteers sign up to fight COVID-19, says DOH
Don't miss out on the latest news and information.