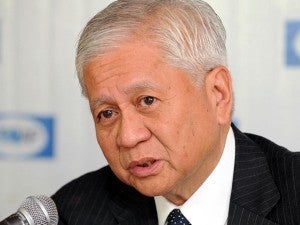 MANILA, Philippines — Former Foreign Affairs Secretary Albert Del Rosario on Tuesday said China has been delaying the final Code of Conduct (COC) that is seen to prevent tensions in the disputed areas of the South China Sea.

According to Del Rosario, China has been biding time which it uses “to put up artificial islands” there.

“In the last couple of years, China has been dragging its feet in terms of finalizing that code. But throughout the years that China has been delaying, they have used that time to put up artificial islands, they had militarized those islands so they were looking for time to finish what they needed to do to be able to control the South China Sea,” Del Rosario said in an interview over CNN Philippines.

“We have to be watchful that what they do there is not to use the Code of Conduct to protect that which they unlawfully put up,” the former top diplomat of the country added.

“I think the position we should take if we are to define what is ours is to go back to this arbitral tribunal outcome, and work around, work with it, work around it and do this on a multilateral basis. Do not try to sit down with China on a bilateral basis because you do not have a chance,” he said.

Del Rosario noted the government should find a way to work with other countries “that have a democracy and are following a rules-based order,” citing countries like Japan and Australia.

“I think what we are accustomed to having is we would like to work within a democratic environment. Number 2, we want to continue to have a rules-based order in the region. These are the two standards that we’d like to have and of course, China has neither of these to offer so how are we going to do this?” Del Rosario said.

“We have to find a way to work with other countries (which) have the same values as ourselves… We have to do this on a multilateral basis because China is just too powerful, too influential, and too much of a bully,” he added.

Presidential Spokesperson Salvador Panelo earlier said that President Rodrigo Duterte expressed his disappointment over delays in the conclusion of the COC during the recent Asean Summit in Thailand.

The Philippines serves as coordinator of the Asean-China dialogue partnership from 2018 to 2021, which includes negotiations for the COC.

“The Palace confirms that President Rodrigo Roa Duterte attended the 34th ASEAN Summit Retreat today, June 23, where he expressed concern and disappointment over the delay in the negotiations for a Code of Conduct (COC) in the South China Sea,” Panelo said in a statement.

READ: Duterte ‘disappointed’ over delay in crafting of COC

“The Chief Executive explained that the longer the delay for an early conclusion of the COC, the higher the probability of maritime incidents happening and the greater the chance for miscalculations that may spiral out of control,” he added. (Editor: Katherine G. Adraneda)