Duterte OK with having third party in probe of boat sinking 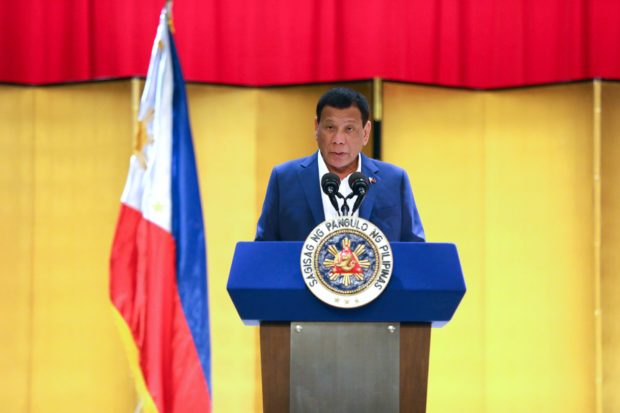 President Rodrigo Duterte delivers a speech at a business forum at the Imperial Hotel in Tokyo, Japan on May 29, 2019. (Photo by KARL NORMAN ALONZO / Presidential Photographers Division)

MANILA, Philippines — After being heavily criticized in what lawmakers said was a surrender of Philippine sovereignty, President Rodrigo Duterte said he was open to having a third party in the joint probe between Manila and Beijing on the sinking of a Filipino boat at the Recto Bank in the West Philippine Sea.

“Well it’s going to be a marine board of inquiry — whatever satisfies the requirement of fair play and due process,” the President told reporters after gracing the premiere of movie “Kontradiksyon” in Mandaluyong City.

The President said there should be “due process that everybody should be heard.”

“Fair play is that there is no one that is under suspicion of siding with the other and you can only do that if you have a board,” he said.

“Kasi pag kanila lang, then we compare which would always be contradictory I suppose, that can be presumed, eh di walang mangyari, parang walang insidente,” he added.

Malacañang earlier said the President had agreed on the proposal of China for a joint probe with the Philippines on the Recto Bank incident.

But during an ambush interview, the President expressed doubts about a joint probe.

He said he already had “the preliminary reports” from the Coast Guard and Navy regarding the boat sinking.

“But the official report,” according to him, “has yet to be prepared and given to me for publication to the people.”

“Iyon ‘yung atin. But if they want another investigation, payag man ako. Or they can always also investigate on their own and we can confront each other with our evidence,” he said.

“Alam mo, kung ako, it’s always biased even if it’s not. Kung kanila namang report it would always be according to the theory of the incident. So atin it’s prejudiced. Eh di walang mangyari bale tabla rin,” he added.