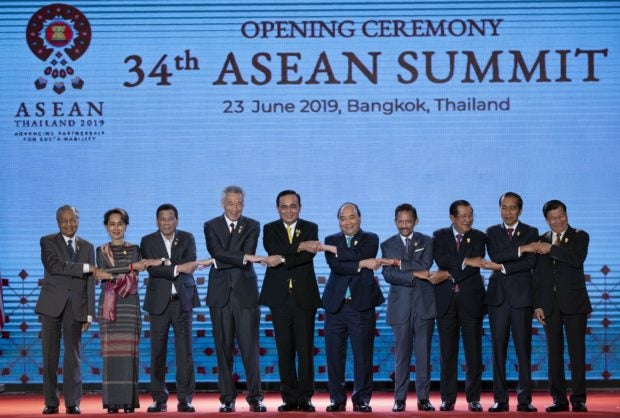 BANGKOK, Thailand — President Rodrigo Duterte has called on the Association of Southeast Asian Nations (Asean) to invest in its peoples as members of the regional bloc work to improve their economies and accelerate their development.

The President has also sought greater protection for the vulnerable people in the region, particularly migrants and people with disabilities, and pushed for more assistance for micro, small and medium enterprises.

“[W]e all aspire for inclusive, equitable and sustainable development. If we are to achieve this, we have to invest in our greatest resource — our people[s],” the President said in his remarks at the Asean Summit’s plenary session on Saturday.

The Philippines backs the establishment of an Asean technical and vocational education and training development council, he said.

“Micro, small and medium enterprises, or MSMEs, are the backbone of Asean economies. Let us help MSMEs harness digital technology so they can play a bigger role in the global value chain. We need to recognize that MSMEs can be powerful engines of growth and job creation in our region,” he said.

People must be able to cope with the changing needs of society due to technological advancements, he said.

“Cutting-edge [technological] breakthroughs are changing our societies in ways we have yet to fully understand. They empower people. But they also widen existing divisions. Let us maximize the benefits of the unfolding Fourth Industrial Revolution to accelerate growth, alleviate poverty, and bridge socio-economic gaps,” he said.

The President also batted for greater mobility of tourists, students and skilled workers to realize the vision of a unified Asean community. But this would require greater protection of migrants’ rights, he said.

“As we facilitate people’s mobility, it is imperative that we promote and protect their rights, especially those who are vulnerable. Let us therefore implement more effectively Asean instruments that combat human trafficking and promote the rights of migrants and persons with disabilities,” he said.

He also urged the Asean members to double their efforts to deal with the problems of illegal drugs, terrorism and transnational crime.

“Terrorism, violent extremism and transnational crimes continue to threaten our security. They divide our communities, destroy families and undermine the growth we fought hard to achieve,” he said.

“Illegal drugs, in particular, corrode the very fabric of our societies. We must redouble our collective efforts to counter these threats effectively and with finality,” he added.

Meanwhile, the President asked the regional bloc to hold accountable the countries that contributed the most to climate change, especially since the region usually bears the brunt of its effects.

“Natural disasters occur more frequently and at an intensity unseen before — be it typhoon, drought, earthquake, landslide or volcanic eruption. The cost is horrendous, especially for us in Southeast Asia: displacement, destruction and death. Real lives hang in the balance,” the President said.

“We must hold countries most responsible for climate change to account, to answer,” he added.

At the same time, he said Asean member-states must take steps to help their peoples cope with the adverse effects of climate change.

“We must adapt and build our resilience by advancing initiatives that care for the people and the environment,” he said.

As this developed, Asean leaders launched a satellite warehouse in Chainat province, Thailand, that would be under the Disaster Emergency Logistics System for Asean.

The warehouse would allow the bloc’s coordinating center for humanitarian assistance to strategically deploy relief goods to disaster-affected Asean members, according to Thai Prime Minister Prayut Chan-ocha, who chairs the regional bloc this year.