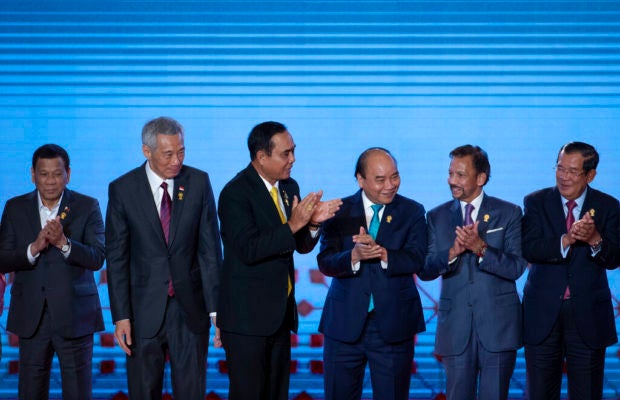 BANGKOK — President Duterte joined other leaders at the formal opening of the Association of Southeast Asian Nations’ 34th Summit in Bangkok on Sunday morning.

Mr. Duterte arrived promptly for the 9 a.m. ceremonies and joined the other leaders of the regional bloc on stage for their traditional handshake.

Thai Prime Minister Prayut Chan-o-Cha, who chairs the Asean this year, welcomed the leaders and called for greater cooperation as the region faces new challenges.

“If Asean did not exist, how would we tackle these challenges? And how much would each country acting alone be able to handle in the face of such challenges? I believe in the power of a strong and united ASEAN as the key to overcoming these challenges and laying down a solid foundation for succeeding generations,” he said.

He also lauded the cooperation that the Asean member states have shown.

“We have been through thick and thin together, overcoming challenges from the Cold War to the present.And when the financial and economic crisis hit Asia, ASEAN joined hands with each other and its friends, becoming a key force in the region’s rapid recovery. And when natural disasters struck, whether earthquakes, tsunamis or cyclones, we in ASEAN never turned our backs on one another, but instead always lent each other a helping hand out of a sense of unity in one Community,” he said.

“Today, our region remains peaceful, with no war and conflict, because in ASEAN we are consistently reminded to respect difference and diversity and aspire to live together in peace and harmony,” he added. (Editor: Julie Espinosa)