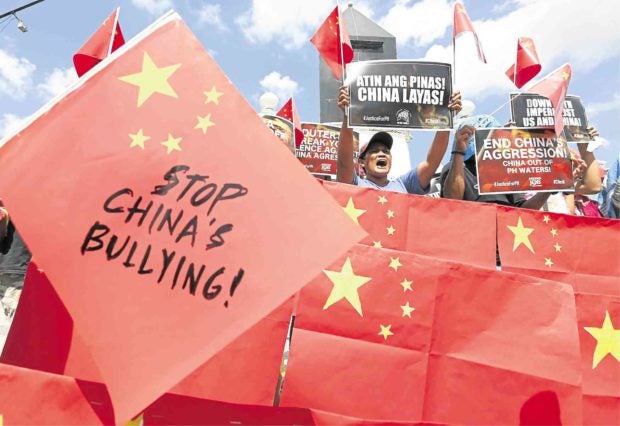 SEEING RED. In a protest rally at Rizal Park on Tuesday, militant groups rage against the June 9 sinking of a Philippine fishing boat by a Chinese vessel, and against President Duterte’s statement on Monday playing down what happened as “a little maritime accident.” —MARIANNE BERMUDEZ

MANILA, Philippines — Senators on Tuesday bewailed President Duterte’s playing down the sinking of a Philippine fishing boat after being hit by a Chinese trawler in the South China Sea as just a “little maritime incident.”

The Philippine fishing boat Gem-Vir 1, which was anchored near Recto Bank (international name: Reed Bank), sank after being hit by a Chinese trawler around midnight on June 9.

The fishing boat’s crew were thrown into the water, but instead of stopping to help the Filipino fishermen, the Chinese trawler sailed away.

The Department of Foreign Affairs filed a diplomatic protest and brought the incident to the attention of the United Nations International Maritime Organization last week.

But the President urged calm in his first public comments about the incident on Monday, calling it “just a collision” between two boats.

His description of the incident echoed that of Chinese foreign ministry spokesperson Lu Kang, who last week called the incident “only an accidental collision between two fishing boats at sea.”

The President called on the public not to make it worse, reiterating the Philippines was not ready to go to war against China.

Surrender to a foreign power

That, for Lacson, was akin to the country’s leader surrendering to a foreign power.

“[There’s] no other way to describe [the President’s] statement except that — surrender,” Lacson told the Inquirer in a text message.

“He even parroted the line of China that this case was an ordinary maritime incident, even downgraded it to ‘little,’” he said.

“It is disappointing to say the least, not much by his insulting remarks, but his self-limiting course of action which disregards an effective ‘weapon’ in our arsenal. It is found in the Mutual Defense Treaty (MDT),” he said in a separate statement.

Lacson was referring to the 1951 defense agreement between the Philippines and the United States, which bound the two countries to come to each other’s aid in case of armed hostilities in the Pacific region.

He said no less than US Secretary of State Mike Pompeo recently stressed that Washington would honor its defense treaty with Manila if a military or civilian vessel was attacked in the South China Sea.

“When we call on the US to abide by the provisions of the MDT, it is not praying for a World War III. What we’re saying is that the mere presence of even a portion of the US Pacific Fleet should be enough to project a balance of power within the West Philippine Sea,” Lacson said, using the local name for the waters within the Philippines’ 370-kilometer exclusive economic zone (EEZ) in the South China Sea.

He rejected the President’s oft-repeated warning that taking a proactive stance in defending the country’s territorial waters might trigger a shooting war involving China, the Philippines and the United States.

“No two superpowers would want to go to war because it is devastating. We’re now in the nuclear age. They will exercise extreme caution before they finally pull the trigger and escalate an incident into a full-scale war,” he said.

Lacson said he received an unverified information that the incident, which he agreed was a case of “allision” since the Filipinos’ boat Gem-Vir 1 was stationary, was just a “test.”

“China could just be testing how we would react in a situation like this. Apparently, the [Filipinos’] boat was hit deliberately because they (Chinese) knew how to do it,” he said.

“There’s an indication that the [Chinese trawler] was not a civilian fishing vessel because [a civilian vessel] is not designed to ram [another vessel]. If the report is true that it’s an armed maritime militia, that is something else. It means the Chinese government armed it,” Lacson said.

Malacañang said Lacson was entitled to his own opinion, but it was premature to invoke the defense treaty with the United States in the maritime row with China.

Panelo said the President was only being “cautious” and wanted the facts to be established first by an investigation.

Cabinet Secretary Karlo Nograles said the defense treaty could not be invoked in the Recto Bank incident because it could “only be used if there is a military act of aggression, armed attack on a public vessel, on troops, on an airship.”

“If it’s not a military attack, I don’t think [the treaty] is even available,” Nograles told reporters.

Opposition senators also deplored the President’s remarks, with Sen. Francis Pangilinan pointing out that no less than the Chinese officials had already confirmed that the crew of the Chinese trawler left the Filipino fishermen for dead in the open sea.

“Why [is the government] giving more weight to the side of the mammoth, very rich and powerful China over the lowly and poor fishermen, who are Filipinos like us?” Pangilinan asked.

Sen. Risa Hontiveros said the President just showed his true character as someone who was “fearless and cruel against the poor, uncouth and disrespectful with women and democracy advocates, but sheepish when it comes to China.”

“It’s just unfortunate for our fishermen. They cannot count on the government for help,” Hontiveros said.

Senate Minority Leader Franklin Drilon reiterated that the crew of the Chinese trawler violated the UN Convention on the Law of the Sea (Unclos) when they refused to help the Filipino fishermen after sinking their boat.

“Let us not muddle the issue. Whether the ramming was intentional or accidental, [it] is clear and admitted… that the Chinese boat captain abandoned the [Filipino] fishermen in distress at sea,” said Drilon, a former justice secretary.

“This violates China’s obligation under the Unclos to rescue those in distress at sea. This is the issue that should be addressed and the basis of China’s liability under international law and the Unclos,” he said.

For detained Sen. Leila de Lima, the President’s decision to belittle the incident was just “too much” and should stir up calls for the immediate resignation of the “inutile President.”

“The pro-China Duterte regime is hard put at supporting the causes of the Filipino fishermen victimized by this latest act of bullying within our own EEZ,” De Lima said in a handwritten dispatch from her detention cell at Camp Crame.

“I see an odious yet subtle effort on the part of our executive authorities to cover up for China, implicitly accepting the flawed and implausible version proffered by the Chinese government regarding the incident,” she said.

‘As if nothing happened’

Junel Insigne, skipper of the Gem-Vir 1, said he was saddened by the President’s remarks.

“It’s as if nothing happened. What if we all died?” Insigne said.

Bayan Muna chair Neri Colmenares said Mr. Duterte was “exonerating” China in the abandonment of the 22 Filipinos fishermen by the Chinese trawler.

“Are the lives of our fishermen of no or of little importance to the President that he [and] his Cabinet members are now downplaying the issue as just an ordinary incident?” Colmenares said. —WITH REPORTS FROM JULIE M. AURELIO, DONA Z. PAZZIBUGAN, MARICAR CINCO, DJ YAP AND AFP