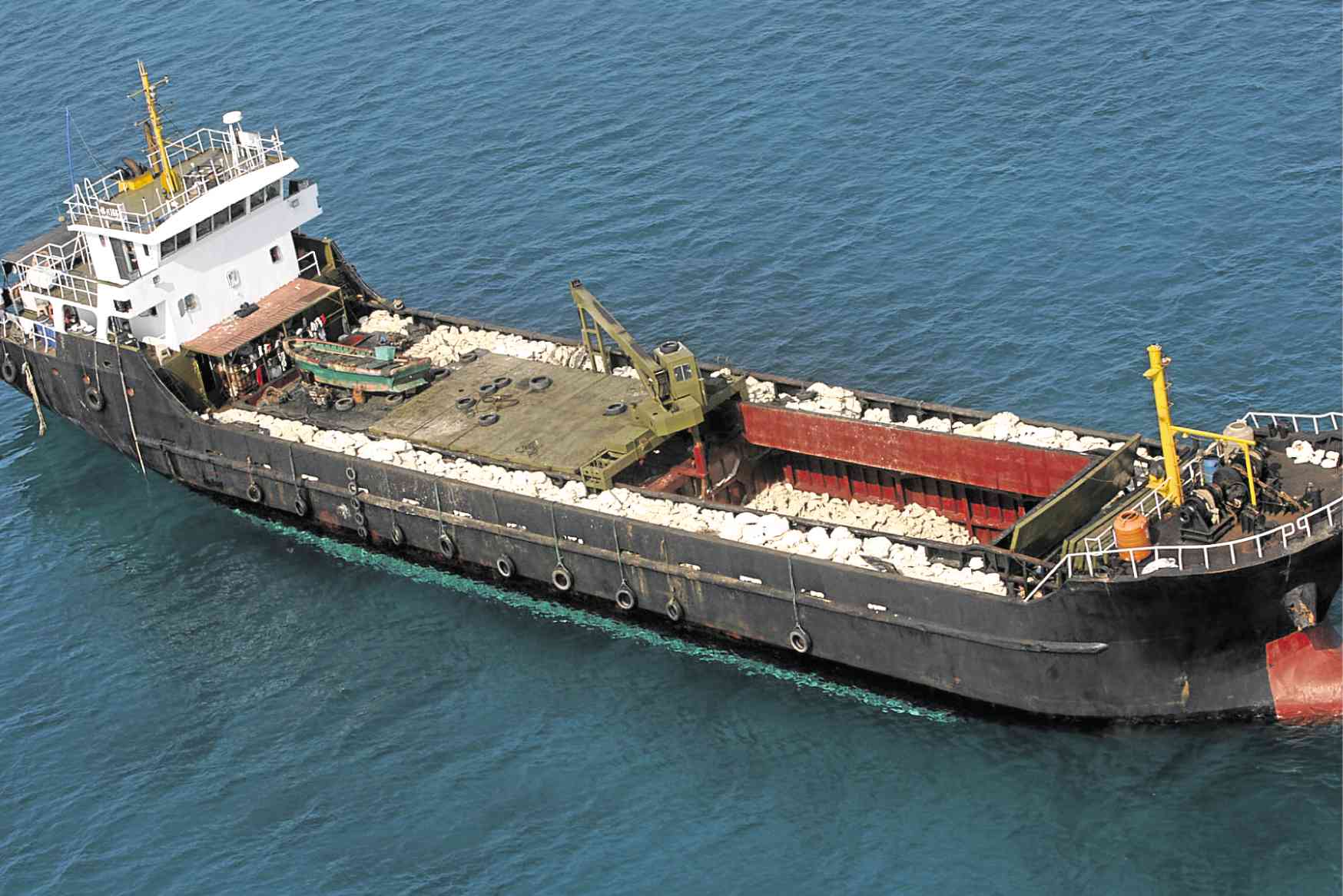 POACHING In this photo taken in 2014, a Chinese ship is loaded with giant clams and corals taken from Panatag (Scarborough) Shoal in the West Philippine Sea, a traditional fishing ground of fishermen from Zambales and Pangasinan provinces. —NIÑO JESUS ORBETA

DAGUPAN CITY—Chinese fishing vessels continue to gather giant clams at Panatag Shoal in the West Philippine Sea despite protests from maritime officials, according to Pangasinan fishermen who sailed there in late May.

Unless Chinese fishermen were stopped, the giant clam population in the West Philippine Sea would soon be decimated, said Yoyoy Rizol, a fisherman based in Infanta town, Pangasinan province.

He said the Chinese use propellers mounted on small boats to break the coral and dig into the 150-square-kilometer lagoon at Panatag (also known as Scarborough) Shoal for clams which are stacked at the shoal’s bank. The clams are later hauled by a larger vessel.

A traditional fishing ground, Panatag Shoal is a triangular chain of reefs and rocks surrounding the lagoon, which is about 240 kilometers southwest of Infanta.

Rizol said the Chinese began digging for giant clams at the shoal in 2003. He saw the giant clam shells up close, describing them as “shiny,” during one of his fishing trips to the shoal this year.

The Chinese sell the giant clams at a village in Hainan province, where the shells are carved into figurines, according to Jay Batongbacal, director of University of the Philippines Institute for Maritime Affairs and Law of the Sea.

“It’s a substitute for ivory. Some of them are also used as jewelry materials,” Batongbacal said in an earlier Inquirer interview.

He said clam harvesting may have been accelerated in 2012 when China seized the shoal following a standoff with the Philippine Navy.

“That could be the reason we hardly see clams there anymore. When we do, it’s no bigger than 9 inches or the span between the thumb and the little finger,” Rizol said.

In its social media page, the UP Marine Science Institute (UPMSI) based in Bolinao town said overexploitation and overharvesting have always been the main threats to the giant clam population.

“To try and rescue these species from total extinction, conservation and restocking programs were started,” it said.

“Giant clams have very important functions in our coral reefs. They take almost a decade to reproduce,” the UPMSI post said. “We should all strive to protect our little giants from being in danger of extinction once again.”