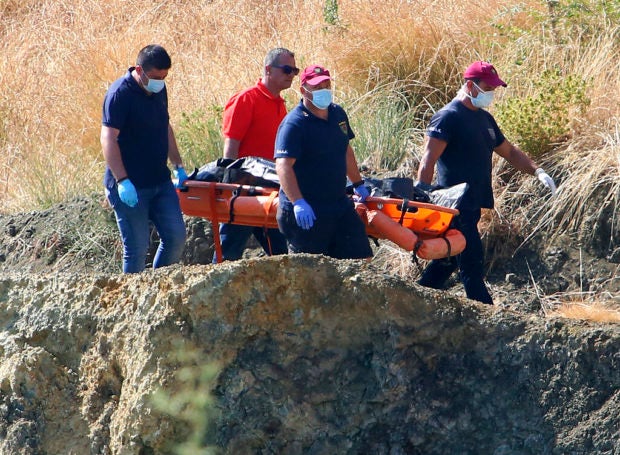 Divers carry what is believed to be remains of a 6-year-old Filipino girl, Sierra Grace, near the village of Xiliatos, Cyprus, Wednesday, June 12, 2019. (AP)

NICOSIA, Cyprus  — A two-month search for the victims of a confessed serial killer in Cyprus came to a close Wednesday when divers discovered the decomposing body of his youngest victim in a lake.

The discovery of the remains of the girl, believed to be 6-year-old Sierra Grace, brings to an end the search that began when an army captain confessed to killing seven foreign women and girls on April 25.

Fire Department Chief Marcos Trangolas told The Associated Press that the remains, which were wrapped in a bed sheet and tied by rope to a cement block, were found among reeds six meters (20 feet) down the lake that was part of a former copper pyrite mine.

He said divers had searched the exact spot where the 35-year-old suspect pointed to investigators earlier Wednesday while on site. Police have said they’ve found no evidence to suggest the suspect has killed anyone else, but investigators are still trying to track down anyone who had been in contact with him online.

The army officer, who police haven’t formally identified yet, had been in contact with several of his victims through online chat rooms. He is widely acknowledged to be Cyprus’ first serial killer.

The chance discovery of the body of Sierra Grace’s mother, Mary Rose Tiburcio, 38, down a flooded mineshaft on April 14 triggered an investigation that led to the suspect through his online communications with the Filipino woman with whom he had had a six-month relationship.

The body of Arian Palanas Lozano, 28, also from the Philippines, was found down the same shaft six days later.

The killings took place over 2-½ years starting in September 2016 with the disappearance of 36-year-old Romanian Livia Florentina Bunea, and her 8-year-old daughter Elena Natalia. Their bodies were found inside suitcases at the bottom of a toxic lake that was part of another copper pyrite mine.

Another body, believed to belong to Ahita Khadka Bista from Nepal, was found down a dry well in a military firing range.

The suspect is due to appear in court Friday, but it’s unclear whether investigators will ask for another custody extension or formally charge him.

Bunea and her daughter will be buried Thursday in a village outside the capital Nicosia.

The Cyprus government has said it will cover the funeral and burial expenses of all the victims.

Read Next
China, US welcome to help PH
EDITORS' PICK
EuroMillions Superdraw: A lottery draw unlike any other is coming to the Philippines
Water remains our saving grace right now
DOH to present new method of reporting COVID-19 cases next week
Smart releases Hyun Bin’s second TVC
Philippines logs 1,494 new COVID-19 patients; tally now at 41,830
Almost 4,000 former communist rebels get financial aid from gov’t–DILG
MOST READ
NAIA Terminal 3 to open for international flights starting July 8
‘Keep our silence:’ Duterte tells troops not to avenge slain agents
As Ringo Starr turns 80, he talks about his life, Beatles journey, including that unfortunate Manila experience
Lacson calls report ‘malicious,’ but journalist says she tried to contact him
Don't miss out on the latest news and information.