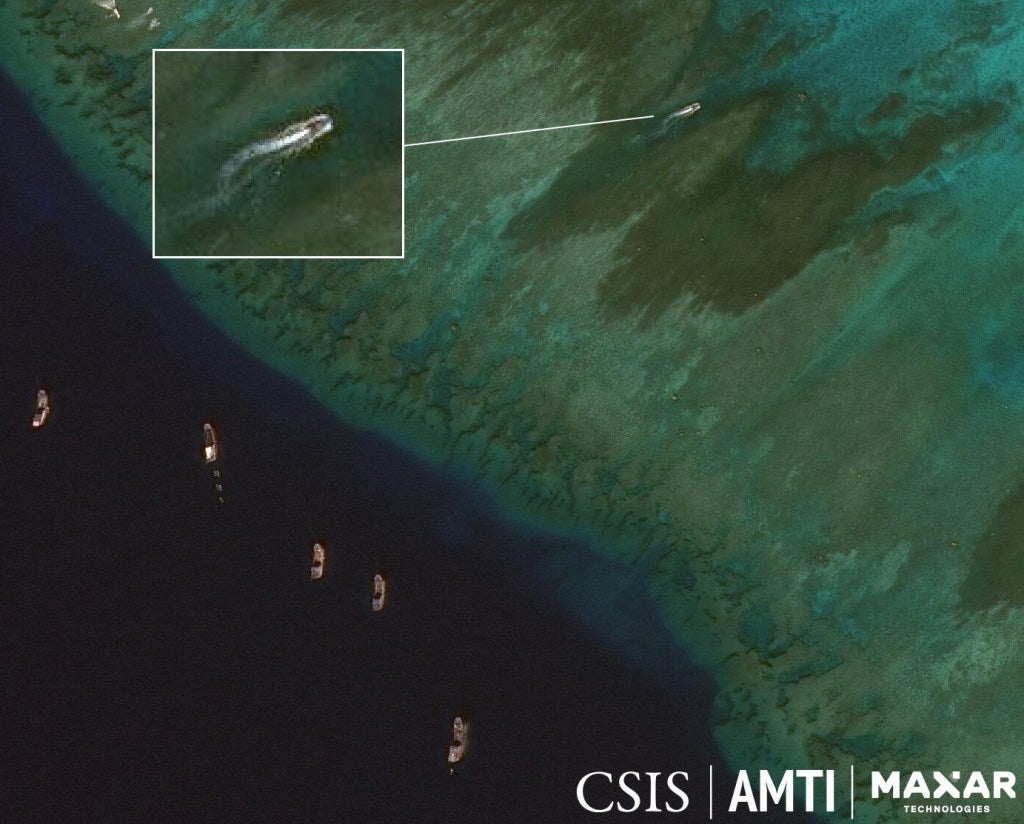 This photo shows motherships and clam harvesting boats being seen off the southwest side of Scarborough Shoal, December 7, 2018. Photo from CSIS Asia Maritime Transparency Initiative/Maxar

MANILA, Philippines — With the looming collapse of marine life in the South China Sea, the Philippines has been urged to take the initiative and lead the efforts among claimants to address environmental concerns.

“Somebody has to make the first move. The Philippines can’t wait for the Asean to do it.  It can’t wait for Vietnamese to come and do it and certainly not China,” he said in a roundtable discussion hosted by Stratbase ADR Institute on Friday.

According to previous studies made by the Asia Maritime Transparency Initiative, China’s artificial island-building, dredging and clam harvesting in recent years have destroyed over 40,000 acres of reefs in the South China Sea. Fish stocks have also declined by up to 75 percent over the last 20 years.

The South China Sea is one of the busiest trade routes and one of the world’s most active fishing zones. The Philippines, China Taiwan, Vietnam, Malaysia and Brunei have conflicting claims over the strategic waterway with abundant natural resources beneath its seabeds.

The West Philippine Sea refers to the parts claimed by the Philippines.

The geopolitical aspect of South China Sea is often given significant attention, while less on environmental and fisheries concerns.

Poling suggested that the Philippines should work with Vietnam, another vocal claimant in the South China Sea, to convince Beijing to address the fisheries and environmental concerns.

He said taking a “separate track” on the issue does not mean that the ongoing code of conduct and other efforts on joint development would be abandoned.

“If Manila wants to save itself in South China Sea, it needs to go to Vietnam and demand a united front against China. It’s as simple as that,” he said.

“The fish is gonna be dead pretty soon. The Philippines is not going to be handcuffed to an Asean-China code of conduct process with some indefinite end date that may or may not address these issues,” Poling said.

He also believes that China should be held accountable for its militia vessels and poachers in the disputed waters.

“Why haven’t we sanctioned Chinese companies who have supported paramilitary forces in the Spratlys? We can easily find out who owns these fishing vessels. We shouldn’t be rewarding engineering corporations for stealing clams. We should at the very least be banning them from operations,” Poling said.

The Philippines should also continue to ask for support from other countries and bring up the South China Sea issue to every international fora to call on the attention of China, Poling added.

“If the Chinese aren’t being talked about, then how can we expect they would feel pressure whatsoever?… It will be very difficult to get outside parties to want it more than the Philippines wants it,” Poling said.

“We’re going to need a broad-ranging, consistent international effort to put pressure on Beijing if we hope to convince them to come to the table for a real negotiation,” he said.

Former Foreign Affairs Secretary Albert del Rosario said that the Philippines should help itself first before asking the help of others.

“It’s difficult to seek help when we are not prepared to help ourselves,” Del Rosario said in the same forum. (Editor: Jonathan P. Vicente)