US to launch new program to fight extremism in Philippines 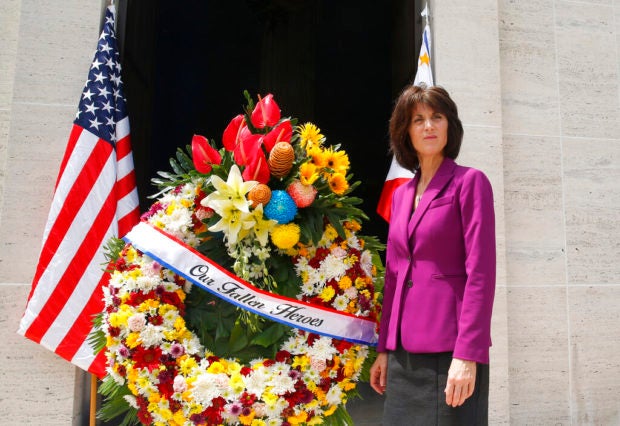 Denise Natali, U.S. Assistant Secretary Bureau of Conflict and Stabilization Operations, stands beside a wreath during a wreath-laying ceremony for the more than 17,000 US troops killed during WWII at the American Cemetery Tuesday, June 4, 2019 in Taguig City. Natali is here to discuss with Philippine security officials a new program to help thwart efforts by Muslim extremists to recruit and mobilize followers after a bloody siege by jihadists aligned with the Islamic State group. (AP)

MANILA, Philippines — U.S. and Philippine officials on Tuesday discussed a new program to thwart efforts by Muslim extremists to recruit and mobilize followers in the country’s south after a bloody siege by jihadists aligned with the Islamic State group.

American and Australian surveillance aircraft helped Filipino troops quell the disastrous 2017 siege by hundreds of mostly local militants in Marawi City, where the commercial and residential center remains in ruins and off-limits to the public. Despite the militants’ defeat, Philippine officials say surviving militants have continued efforts to recruit new followers and plot new attacks.

More than 1,100 militants were killed and hundreds of thousands of residents were displaced in the five-month siege in the mosque-studded city, which renewed fears that the Islamic State group was stepping up collaboration with local jihadists to gain a foothold in the region.

“We are focusing on how to prevent further and future incidences of violent extremism and radicalization from occurring so that we don’t have another Marawi ever again,” Natali said at a news conference.

The State Department bureau and the Philippine government are finalizing details of the program to help provincial governments and nongovernment groups design and enforce effective projects to counter extremism, Natali said.

She said she was to meet President Rodrigo Duterte’s national security adviser and other officials in Manila on Tuesday.

Natali emphasized the importance of basing such projects on facts and evidence instead of assumptions, citing a five-month survey commissioned by the U.S. last year in four southern Muslim provinces that showed which issues were helping spark extremism and radicalization the most.

The survey showed that while some people may back local jihadists, there was significantly lower support for foreign militant groups such as the Islamic State group and the Al Qaida militant network. Religious intolerance, dire economic conditions and exposure to violence spark extremism more than religion, Natali cited the survey as showing.

“It’s not about religion; it is about living conditions. There is an economic component to this,” Natali told reporters.

The survey also showed that there was strong public support for the government’s effort to combat extremism, she said.

The Philippines has been one of Washington’s strongest Asian allies in the fight against terrorism since the Sept. 11, 2001 terrorist attacks in the U.S.

Duterte, who has been a vocal critic of U.S. security policies, said after taking office in mid-2016 that he wanted U.S. counterterrorism forces out of the southern Philippines while he rebuilt frayed relations with China.

The Philippine military, however, has maintained robust relations with the U.S. More than 100 U.S. military counterterrorism advisers and personnel remain in southern Mindanao region to help Filipino forces battling extremists on a string of impoverished islands.

International Committee of the Red Cross President Peter Maurer, meanwhile, visited Marawi on Monday and expressed concern over the continued displacement of tens of thousands of people and the slow pace of reconstruction two years after the siege ended.

It’s a dire situation he said he has seen in the aftermath of the wars in Syria and Iraq and which he said was partly caused by complex problems like the massive amounts of explosives that have to be cleared before reconstruction can commence.

Maurer said he later discussed the post-conflict conditions in Marawi with Duterte.

He told reporters in Manila on Tuesday that Duterte “noticed as we noticed as well that there is a comprehensive level of dissatisfaction with the fact that this is taking a long time.”