MANILA, Philippines – Going on a meatless diet even for just a day in a week can make a huge positive impact on the environment.

This was the message of a Filipino high school student, who spoke before business leaders, policymakers, and experts at the opening day of the World Circular Economy Forum (WCEF) on Monday in Helsinki, Finland.

Grade 8 student Myka Nadine Chua of Sophia School in Meycauayan, Bulacan, who represented the Philippines and Asia, was one of 10 student speakers from nine countries who marched onstage with banners and placards calling for immediate action to combat climate change.

In the “Voice of the Next Generation: ‘Our Planet, Our Home’” segment in the forum, Chua explained how eating meat causes greenhouse gas emissions.

“The Philippines is one of the Asian countries that include a lot of meat and animal products in their diet. That is why I encourage all of you and all the schools around the world to go meatless even just for once a week so that we can save the only planet that we have,” Chua said in her speech.

“We don’t need to be billionaires, superheroes or political leaders. We just have to be ordinary persons who do ordinary things for extraordinary goals like saving Mother Earth. So let us all be earth warriors,” she added, drawing cheers from the audience.

According to the United Nations, livestock is a major contributor to ocean pollution and the depletion of natural resources such as water and land. Eating meat also compromises food security since grains are fed to livestock.

Other students spoke of the environmental problems in their home countries. Representatives from Australia said their countrymen “tend to overconsume things” such as clothing, packaged food, and electronic devices.

Students from at least 70 countries march onstage to call for urgent action to combat climate change. (Screengrab from WCEF livestream)

“This can be seen in the 6 tons of textiles thrown out every 10 minutes, the 118,000 plastic bottles and 700,000 tons of e-waste thrown every year in Australia,” Zoe, the Australian student, said.

The young African speaker from Botswana spoke of soil erosion, air and water pollution, drought, and floods, while students from Mexico and Ecuador raised the lack of efficient public transportation that prompts people to buy and use private cars.

The WCEF is the global initiative of Finland and the Finnish Innovation Fund Sitra. The event brought together some 2,000 business leaders, policymakers and experts to discuss how businesses can grow in a “circular economy,” in which consumption is based on using services, such as sharing, renting and recycling, instead of owning things.

Chua and fellow Grade 8 student Juan Iñigo Abacan, also of Sophia School, represented the Philippines in the annual World Summit of Students for Climate (WSSC) in Finland from May 28 to June 5. The weeklong summit includes discussions and creation of multimedia projects on mitigation and adaptation to climate change and the role of forests in the participants’ home countries. (Editor: Eden Estopace) 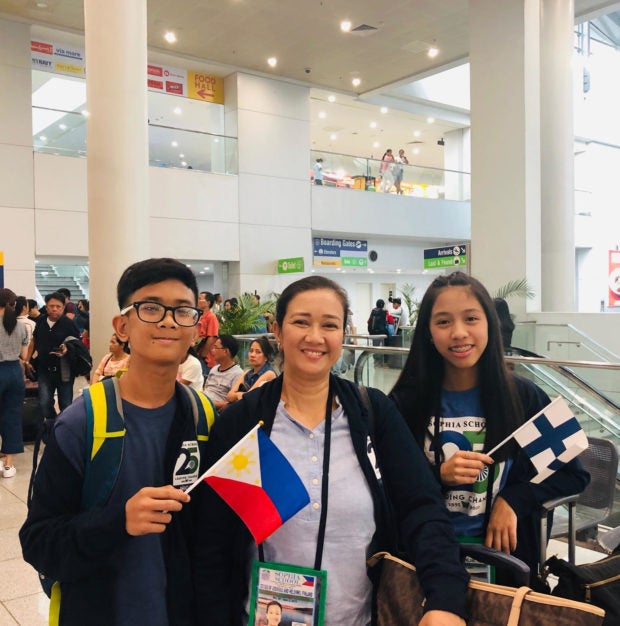