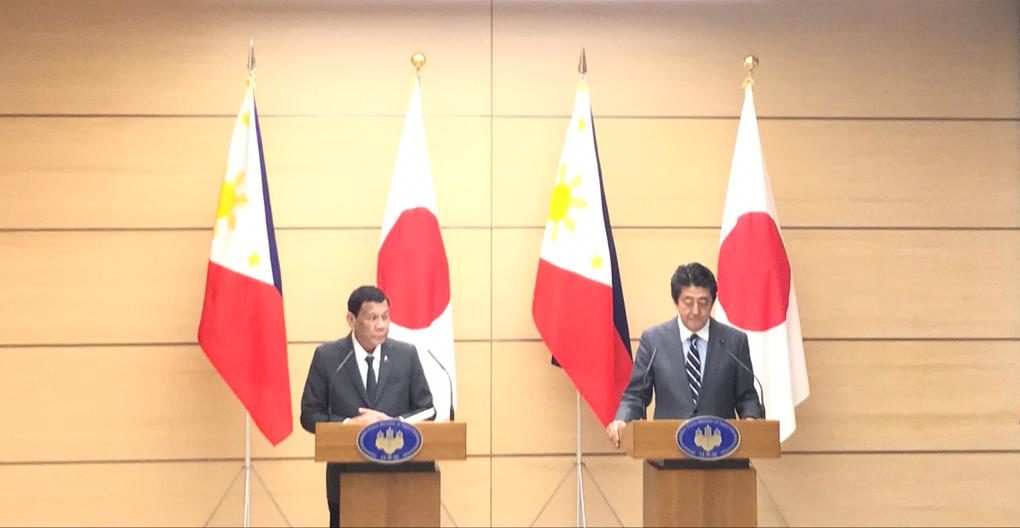 In a statement, the Palace touted the gains of Duterte’s four-day working visit here.

“President Rodrigo Duterte capped his working visit to Japan on a high note, putting the Philippines’ strategic partnership with Japan on an even stronger footing,” the statement read.

The President arrived in Manila before dawn Saturday after a

The President returned to “a successful” bilateral meeting with Japanese Prime Minister Abe Shinzo and participated in the 25th Nikkei International Conference on The Future of Asia.

The President, the Palace added, “conveyed appreciation for Japan’s renewed support for the government’s Build, Build, Build program, citing Japanese development assistance as the gold standard for the country’s development cooperation with other partner countries.”

“The President welcomed Japan’s fresh commitment of around 25 billion yen for the development of Mindanao’s road network, vocational training facilities and equipment, water supply development in the Bangsamoro, and livelihood programs, among other projects,” it said.

Duterte and Abe also “discussed modalities for greater cooperation in upgrading the Philippines’ defense capabilities, including in maritime security and maritime domain awareness.”

“They explored opportunities to tap the demographic complementarity between the two countries to drive economic growth, including the possibility of Japan opening its door to skilled foreign labor,” it said,

The two leaders, the Palace said, “exchanged views on regional maritime security, non-traditional threats, on-going efforts to secure peace in the Korean Peninsula, supporting free trade, and advancing the rule of law, including in the South China Sea.”

In his speech at the Nikkei forum, “Duterte stressed that the destruction caused by natural disasters is more painful for developing nations and for the poorest of the poor,” citing the challenge on climate change

The Palace said “the President urged for greater accountability among developed countries stressing that ‘when the lives of millions hang in a balance, there has got to be a way.'”

The President also assured businessmen “that corruption will never be tolerated, the President assured Japanese businessmen that the Philippines is a safe and profitable destination for their investments.”

The President hailed the partnership between the Philippines and Japan as one that “empowers rather than fosters dependency” and is the “kind of relationship that we [the Philippines] seek with other countries”.

“President Duterte thanked Japanese partners for their vote of confidence in the Philippines as a trade market and investment destination,” the Palace said.

The President “also met key Japanese tourism industry partners who expressed optimism in doing more business in the Philippines, affirming that the country has remained one of the preferred tourism destinations of Japanese nationals.”

In his meeting with the Filipino community here, Duterte “thanked them for the overwhelming support given during the recent Philippine midterm elections.”  (Editor: Mike U. Frialde)