globalnation / Americas
Americas
‘WE NEED TO LEARN FROM THIS PROLONGED ORDEAL’

Never again: Trash returned to Canada after 6 years in the Philippines 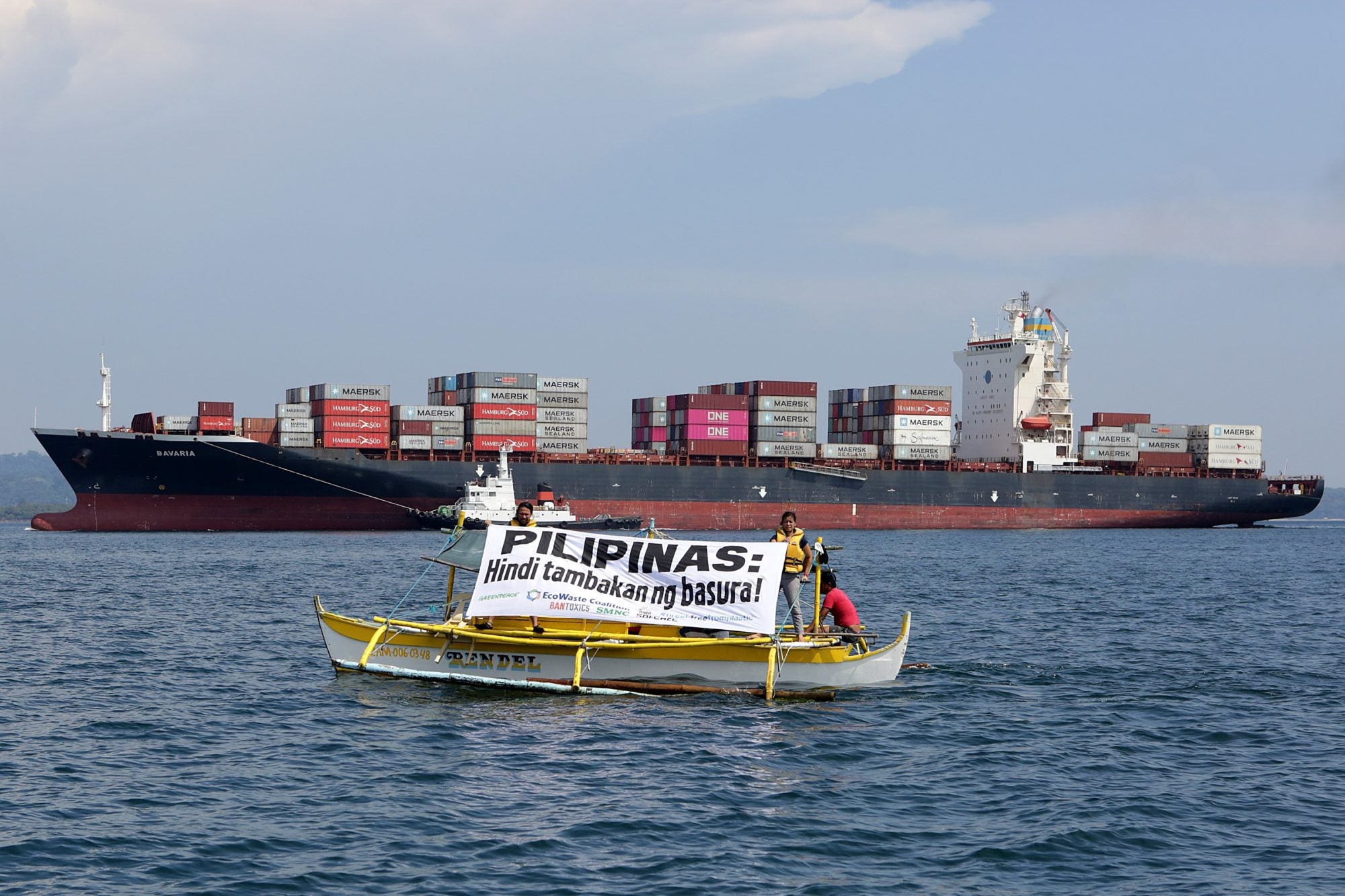 WE’RE NOT YOUR DUMP Greenpeace activists sail their boat near the container shipMVBavaria to make a statement as the
vessel that will carry Canadian trash back to Canada is towed into Subic Bay port on Thursday. The activists’ banner reads,
“The Philippines is not a dump.” —GREENPEACE

SUBIC BAY FREEPORT—Following a threat from Malacañang that Manila would cut diplomatic ties with Ottawa, Canada made good on its promise to repatriate tons of Canadian waste illegally exported to the Philippines about six years ago when a ship that would haul them back arrived on Thursday at Subic Bay Freeport to load the cargo.

Earlier in the day, dozens of environmentalists, some of them accompanied by children, held a rally at a beach resort inside the free port demanding that both the Canadian and Philippine governments prevent a repeat of the waste shipment, which they said violated an international treaty.

Greenpeace Philippines, EcoWaste Coalition, BAN Toxics, Global Alliance for Incinerator Alternatives and Break Free from Plastic Movement sent off the garbage with a message in a banner that said, “We are not the world’s dump.” Another banner said “Never again, ban waste imports to stop pollution.”

“We need to learn from this prolonged ordeal and make sure it is never repeated. Never again shall we allow other countries to trash our dignity, our people’s health and the environment,” said Aileen Lucero, EcoWaste national coordinator.

The MV Bavaria docked at the port around 2:30 p.m. on Thursday, two days after it arrived in Manila.

Officials of the Subic Bay Metropolitan Authority (SBMA) said the 69 containers packed with the garbage were to be loaded onto the ship on Thursday evening. The Bavaria was expected to leave early on Friday.

There were originally 103 containers shipped to the Philippines between 2013 and 2014 by Ontario-based Chronic Inc., which declared the trash as plastic. They were consigned to Chronic Plastic based in Valenzuela City and to  Live Green Enterprise.

The Bureau of Customs (BOC) earlier said the contents of 34 containers had been disposed of but the Metro Clark Waste Management Corp. (MCWMC) said only 26 were emptied at its landfill in Barangay Kalangitan in Capas, Tarlac province, in July 2015.

Eight more containers were driven to Kalangitan, but the MCWMC rejected these. Officials could not recall who took them back.

Greenpeace said these were hazardous waste, according to Republic Act No. 6969, or the Toxic Substances and Hazardous and Nuclear Waste and Control Act of 1990.

The shipment violated the Basel Convention, it said.

Acting on instructions from the Department of Foreign Affairs (DFA), SBMA Administrator Wilma Eisma barred media coverage of “any point” of the shipping process.

She said the SBMA and DFA media production teams would document the whole process, and only the DFA teams would be allowed to issue media updates, pictures and videos.

On Twitter, Foreign Secretary Teodoro Locsin Jr. said Canada “picked up the tab from fumigation to ship side loading to departure, including helping get foreign permits for transshipment so ship’s captain will depart (with stops) all the way to Canada.”

After Ottawa failed to meet the May 15 deadline that Manila imposed to take back the garbage, President Duterte ordered the Philippine ambassador and senior diplomats recalled from Canada.

“That recall shows that we are very serious in asking them to get back their garbage. Otherwise, we’re going to sever relations with them,” presidential spokesperson Salvador Panelo said in a statement on May 16.

Joe DiGangi of Sweden-based public interest group IPEN said Canada should have complied with the Basel Convention and repatriated the garbage years ago.

The environmental groups urged both countries to ratify the Basel Ban Amendment, which would prohibit the export of hazardous waste and other trash from developed to developing countries for any reason, including recycling.

At a congressional hearing on Thursday, Assistant Foreign Secretary Maria Lumen Isleta said the DFA had recommended that Canada take action against the exporter, Chronic Inc., and that Ottawa had committed to do so. —WITH REPORTS FROM JHESSET O. ENANO, JEROME ANING AND KRIXIA SUBINGSUBING