After 6 years, Canada trash out of Subic port on Friday 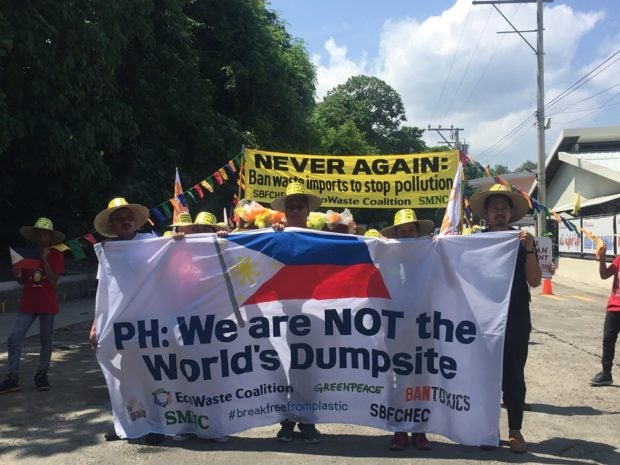 Various environmental groups led by the Ecowaste Coalition troop to Subic Bay Freeport as the container ship MV Bavaria is expected to arrive there to fetch the container vans loaded with trash from Canada. Photo by Joanna Rose Aglibot

SUBIC BAY FREEPORT —- After languishing in this free port for six years, the 69 container vans loaded with garbage from Canada will finally be shipped back to its country of origin on Thursday.

The container ship MV Bavaria is expected to arrive here at 1 p.m. to fetch the garbage from the Subic Bay International Terminal Corp., officials of the Subic Bay Metropolitan Authority (SBMA) said.

In an advisory, the SBMA said the loading of the container vans onto the ship that would transport these to Canada would start at 3 p.m. and might finish at midnight or at 2 a.m. on Friday.

The Ontario-based Chronic Inc. exported 103 container vans of trash declared as plastic to the Chronic Plastic based in Valenzuela City and to the Live Green Enterprise in 2013 and 2014.

Some of the container vans were kept at the Manila International Terminal Container and in this free port.

President Duterte issued an ultimatum to Canada when he said on April 23 that he would “accompany” the ship that would bring back the trash to Canada. (Editor: Leti Boniol)