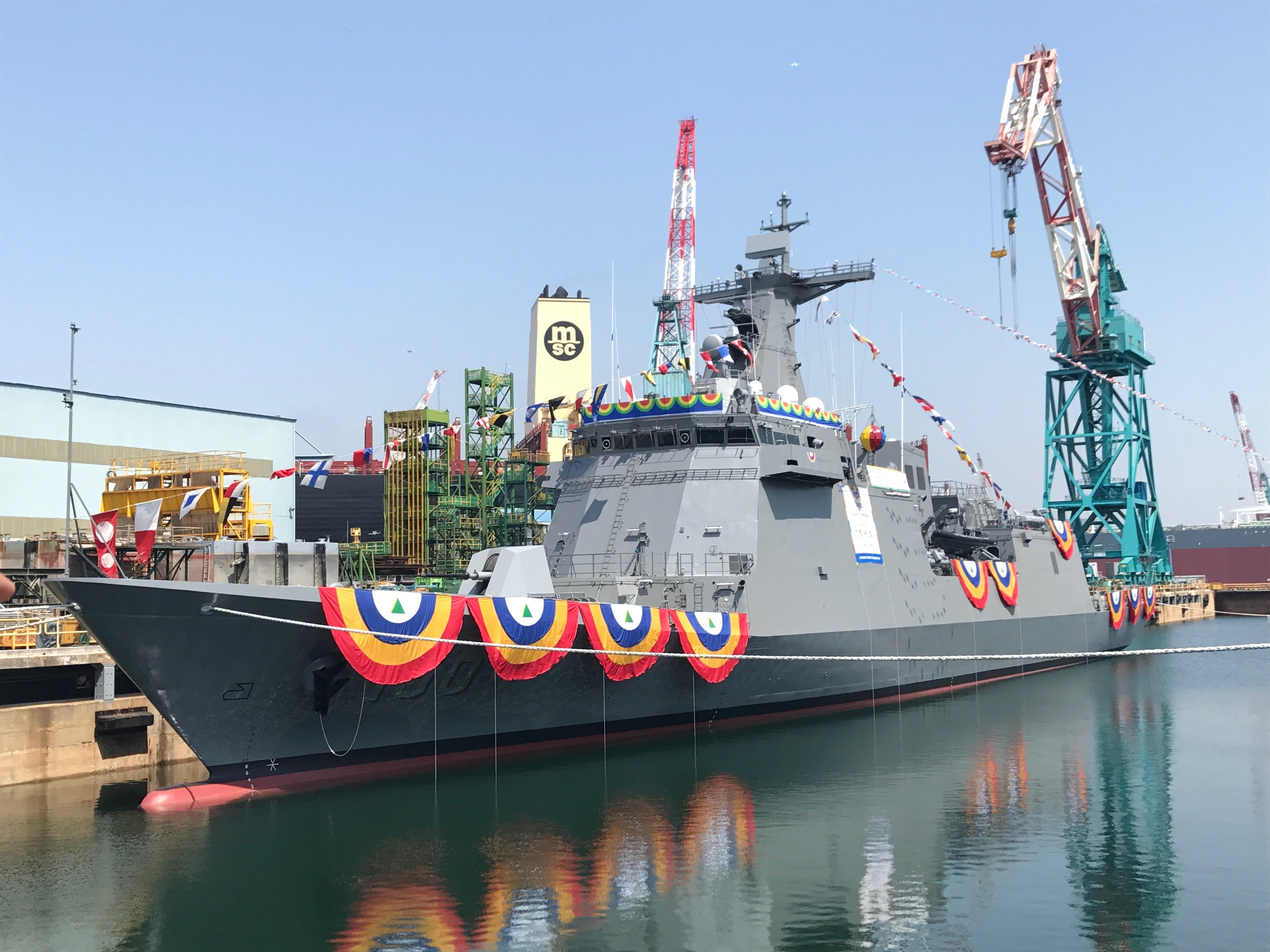 IN THE WATER AT LAST Bunting bedeck the BRP Jose Rizal, the first brand-new warship of the Philippine Navy, which was
launched on Thursday by Hyundai Heavy Industries at its shipyard in Ulsan, South Korea. The 107-metermissile-armed
frigate is capable of antisurface, antisubmarine and electronic warfare. —FRANCES MANGOSING

ULSAN, SOUTH KOREA — The first missile-firing warship to be built for the Philippine Navy was finally launched on Thursday, seven months after its keel was laid.

The future BRP Jose Rizal frigate, with hull number FF-150, was transferred to the water during a ceremony attended by Philippine defense and military officials at the Hyundai Heavy Industries (HHI) shipyard here.

The Philippine government signed a deal with HHI to buy two ships of a design based on the Incheon/FFX-I/HDF-3000 frigate of the Republic of Korea Navy for P16 billion in 2016.

The event coincided with the keel-laying ceremony for the second frigate, the future BRP Antonio Luna. The rites marked the formal construction of the vessel.

Apart from their complement of missiles, each of the multipurpose frigates will be armed with an Oto Melara 76mm superrapid gun and a Smash Aselsan 30mm remote-controlled naval cannon.

The warships will be equipped with surface-to-air and surface-to-surface missiles, torpedoes, decoy launchers and weapons systems for four-dimensional warfare.

Each vessel is capable of carrying more than 100 officers and crew and features a flight deck at the stern and a hangar to handle the AgustaWestland AW159 Wildcat antisubmarine and antisurface helicopter, two of which were delivered to the Philippine Navy on May 7.

When fully operational, the frigates will each have two rigid-hulled inflatable boats for military and emergency operations at sea.

The Jose Rizal is expected to be delivered to the Philippines by Sept. 6 next year and the Antonio Luna by March 6, 2021.

Empedrad said the frigates would beef up the country’s defenses and may be deployed in the West Philippine Sea, waters within the country’s 371-km exclusive economic zone in the South China Sea, and the Philippine Rise.

“Having frigates used to be just a dream,” said Elefante, reading from a speech of Defense Secretary Delfin Lorenzana, who was not present at the event.

“The frigates we are acquiring will serve as a shining symbol of our people who come from a proud race of seafarers and boost our ability to defend our seas and territories,” Elefante said.

The frigate acquisition project of the Philippine Navy was embroiled in controversy in late 2017 after Lorenzana sacked Vice Adm. Ronald Joseph Mercado, the then Navy chief, for pushing a certain brand of combat management system (CMS) for the vessels.

Mercado had supported the recommendation of a Philippine Navy technical working group for the selection of the Netherlands’ widely used Thales Tacticos, but HHI eventually awarded the CMS contract to the Korean-made Hanwha Naval Shield.

Critics of the HHI contract accused Malacañang of intervening in the selection of the CMS, the software-intensive system flexible enough to operate in a complex naval battle environment, prompting the Senate and the House of Representatives to investigate.

President Duterte later said he merely acted on a complaint by HHI.

Speaking to reporters at the HHI headquarters in Seoul on Tuesday, Sam Ka, the company’s CEO and president, denied interfering in the selection of the CMS, saying HHI did not have the influence to do so.

“We are not so strong, not so much impression, so we can’t have many friends [and] approach your government. I think when [we] do any kind of business activities, we try to follow the official channels, which means that it should have been done according to your acquisition or modernization programs,” Ka said.

“As far as I understand [the issue] there were two vendors in the maker’s list for the CMS system. We also understand that there were some cases in the Korean Navy [where] the system was supplied and … proved to be [a] very good system and [of] good quality. So according to the contractor, we have dual vendors. We just recommended Hanwha to the clients in the Philippines,” he added.