Philippines warns of cutting ties with Canada over uncollected garbage 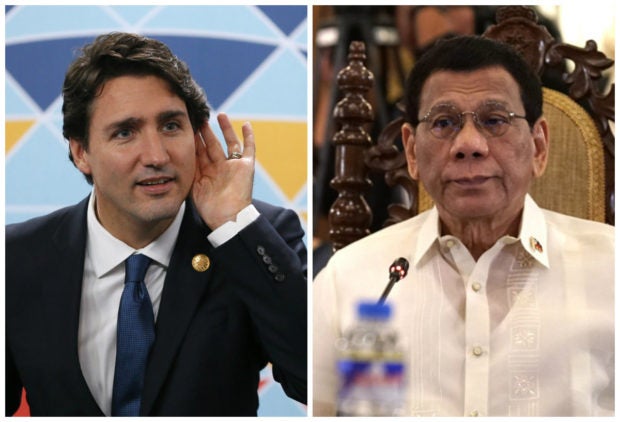 MANILA, Philippines — Malacañang has cautioned Canada to take back their garbage pronto or the Philippines would “sever relations with them.”

Presidential Spokesperson Salvador Panelo issued this stern warning after Canada missed President Rodrigo Duterte’s May 15-deadline for it to retake the tons of garbage it shipped to the Philippines six years ago.

On Thursday, Foreign Affairs Secretary Teodoro Locsin Jr. said the Philippines has recalled its ambassador and consuls to Canada over the garbage row.

“That recall shows that we are very serious in asking them to get back their garbage. Otherwise, we’re gonna sever relations with them,” Panelo said in a Palace briefing.

“That order of the recall is to persuade them to make it fast. The more they delay, the more personnel will be coming back,” he added.

Last April 23, Duterte warned Manila would declare war against Ottawa if it does not take back the trash.

Between 2013 and 2014, the Bureau of Customs intercepted a total of 103 containers of mixed garbage from Canada that were declared as “recyclable scrap plastics.”

Panelo on Wednesday told reporters that Malacañang was willing to accept a few weeks’ delays in the return to Canada of trash shipments.

“The [Department of Foreign Affairs] said there might be a slight delay because of certain documents. If it’s just a slight delay, the President is a reasonable man. What’s important is they would take back their waste,” Panelo said.

Canada had earlier committed to take the trash back and even shoulder all expenses for it.