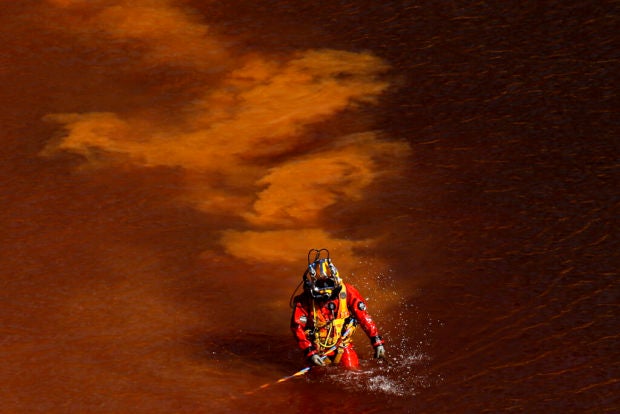 A diver walks out from a toxic man-made lake after a dive search for a third victim near the village of Mitsero outside of the capital Nicosia, Cyprus, Wednesday, May 8, 2019. (AP)

NICOSIA, Cyprus — A Cypriot army captain who confessed to killing seven foreign women and girls will remain in custody after a court on Monday approved a police request to extend his detention for another eight days.

Investigators need more time to collect testimony and other evidence as authorities continue to search for the bodies of two of the victims, police investigator YIannis Georgadjis told the court.

The 35 year-old suspect, believed to be Cyprus’ first known serial killer, faces charges including premeditated murder and kidnapping in the slayings of three Filipino women and the daughter of one of them, a Romanian mother and daughter and a woman believed to be from Nepal.

The killings appear to have taken place over a period of 2 ½ years starting in September 2016 with the disappearance of 36-year-old Romanian Livia Florentina Bunea, and her 8-year-old daughter Elena Natalia.

Police are accused of failing to properly investigate initial missing persons’ reports that may have prevented the suspect from claiming more victims. Revelations of what the Cypriot president called “negligence” on the part of some police officers led to the justice minister’s resignation while the police chief was fired.

The suspect, who authorities haven’t formally identified, faces an additional charge of raping a woman he contacted through a social media platform. The woman, who was 19 in early 2017 when the alleged rape took place, told police the suspect had sex with her against her will in his car when he picked her up supposedly to give her modelling photographs he took of her.

The suspect is denying the rape allegation. Wearing a bulletproof vest, he represented himself in court on Monday and said he didn’t object to his detention.

The chance discovery of the bound body of Mary Rose Tiburcio, 38, from the Philippines, down an abandoned mineshaft triggered an investigation last month that led to the suspect’s arrest.

The suspect confessed to seven killings in a 10-page handwritten note and took investigators to where he dumped some of his victims.

They include a poisonous lake that is part of a disused copper mine where he said he disposed of the bodies of Bunea, her daughter and another Filipino woman after placing them in suitcases. Divers have so far retrieved two suitcases from the lake and are continuing to search for a third.

A separate search is being carried out at another lake where the suspect said he dumped the body of Tiburcio’s 6-year-old daughter Sierra Grace.

Investigators said the suspect, who is divorced and has two children, had a six-month relationship with Tiburcio before she and her daughter vanished in May 2018.