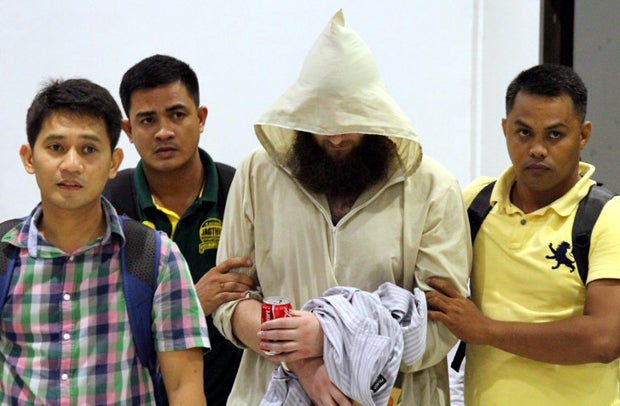 Philippine Immigration officers escort Robert Edward Cerantonio (C), an Australian convert to Islam who used the internet to urge people to join “jihad” in Iraq and Syria, shortly after arriving at Manila airport on July 11, 2014, after he was arrested in Cebu City.  An Australian judge has ordered Cerantonio to serve at least five years and three months in prison for a terror plot in the southern Philippines. (AFP)

MELBOURNE, Australia  — The ringleader of a plot to take six extremists from Australia in a motor boat to the southern Philippines to overthrow the provincial government was sentenced by an Australian judge on Friday to seven years in prison.

The 34-year-old had pleaded guilty to engaging in conduct in preparation for hostile activities in a foreign country.

Cerantonio and five other men had plotted in 2016 to take a 7-meter (23-foot) half-cabin fiberglass power boat off the northeast Queensland coast to encourage others to overthrow the government in the southern Philippines and install Sharia Law. None of them could travel the 3,500 kilometers (2,200 miles) to the Philippines by conventional means because their Australian passports had been canceled due to concerns they would become foreign fighters.

They had towed the boat with a car 3,100 kilometers (1,900 miles) from their homes in Melbourne on the Australian south coast to Laura in the tropical north before they were arrested by police in May 2016.

Croucher described the planned voyage by men with no experience of boats as a trip “foredoomed to failure.”

“It’s hard to imagine they would have made it very far past the breakers,” Croucher said.

The other five had already been sentenced from three years and 10 months to four years in prison.

Croucher said Cerantonio’s role in sharing his “putrid ideas” deserved a greater punishment than the other men who were subordinates and influenced by him.

Philippine authorities deported Cerantonio in 2014 because of his suspected links to militants based on YouTube videos showing him advocating jihad and urging local Muslims to support extremists in the Middle East.

“He intended to use his considerable gifts for evil, not for good,” Croucher said.

Croucher was not satisfied Cerantonio had renounced his extremist beliefs since his arrest.

“This is a man who doesn’t always fit the profile of an Islamic extremist,” Williams said.