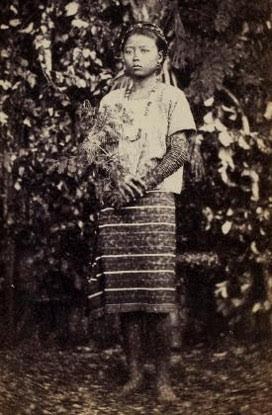 A portrait of a Filipino woman, from a series of portraits of Filipinos in 1865 by Pedro Picon, is among early photographs currently on exhibit at the Louvre Abu Dhabi. Photo courtesy of Louvre Abu Dhabi and musée du quaiBranly – Jacques Chirac

MANILA, Philippines — Historic photographs from the Philippines are among those on display in a museum in Abu Dhabi from April 25 to July 13, the Department of Foreign Affairs (DFA) said.

In a statement on Thursday, the DFA said that the Louvre Abu Dhabi will showcase more than 250 of the earliest photographs taken from across the world in its exhibit called “Photographs 1842 – 1896:  An Early Album of the World.”

Among those displayed in the exhibit are early photographs of Filipinos, including works by Pedro Picon.

Picon, the DFA noted, is the creator of one of the earliest photographs in the Philippines.

“An album from musée du quaiBranly –JacquesChirac, which is presented in the exhibition, contains an early selection of studio portraits of Filipino subjects in visiting-card format,” the DFA said.

Louvre Abu Dhabi Director Manuel Rabaté was quoted as saying that the exhibition “explores the role of photography in enabling the sharing of photographs from around the world, documenting people’s lives and environments.”

“Pioneering photographers played a key role in making other cultures visible and accessible to people back home,” Rabaté added.   /muf