Protesters, mostly workers, gather for a rally prior to marching towards the Presidential Palace in Manila to pay tribute to workers in celebration of International Labor Day Wednesday, May 1, 2019 in the Philippines. (AP Photo/Bullit Marquez)

SEOUL — Thousands of trade union members and activists were marking May Day on Wednesday by marching through Asia’s capitals and demanding better working conditions and expanding labor rights.

A major South Korean umbrella trade union also issued a joint statement with a North Korean workers’ organization calling for the Koreas to push ahead with engagement commitments made during a series of inter-Korean summits last year. Many of the plans agreed to between the Koreas, including joint economic projects, have been held back by a lack of progress in nuclear negotiations between Washington and Pyongyang.

May Day rallies were also being held in other parts of Asia, including the Philippines, Malaysia, Indonesia, Taiwan, Cambodia, and Myanmar. Other parts of the world were set to have rallies as well.

In Sri Lanka, major political parties called off traditional May Day rallies due to security concerns following the Easter bombings that killed 253 people and were claimed by militants linked to the Islamic State group.

French authorities announced tight security measures for May Day demonstrations, with the interior minister saying there was a risk that “radical activists” could join anti-government yellow vest protesters and union workers in the streets of Paris and across the country. More than 7,400 police will be deployed, aided by drones to give them an overview of the protests and a quicker way to head off potential violence.

Wearing headbands and swinging their fists, the protesters in Seoul rallied in streets near City Hall, marching under banners denouncing deteriorating working conditions and calling for equal treatment and pay for non-regular workers. Members of the Korean Confederation of Trade Unions stage a May Day rally in Seoul, South Korea, Wednesday, May 1, 2019. Thousands of trade union members and activists are marking May Day by marching through Asia’s capitals and demanding better working conditions and expanding labor rights. (AP Photo/Ahn Young-joon)

The Korean Confederation of Trade Unions, which organized the protests and issued the joint statement with the North Korean organization, said more than 27,000 demonstrators turned out for Wednesday’s marches in Seoul, which proceeded peacefully with no immediate reports of injuries or major clashes. Police did not immediately provide a crowd estimate. May Day rallies were also held in other major South Korean cities, including Busan, Gwangju and Daejeon.

Liberal President Moon Jae-in, who won office in May 2017 following the ouster of his conservative predecessor over a corruption scandal, had pushed a labor-friendly agenda that promised to expand workers’ rights, reduce the country’s notoriously long working hours and address the problems of inequality by elevating minimum wages and reining in the excesses of chaebol.

However, critics say a decaying job market and bad economy, which unexpectedly shrank 0.3% during the last quarter due to sluggish investment, has softened the government’s approach on labor rights and corporate reform. 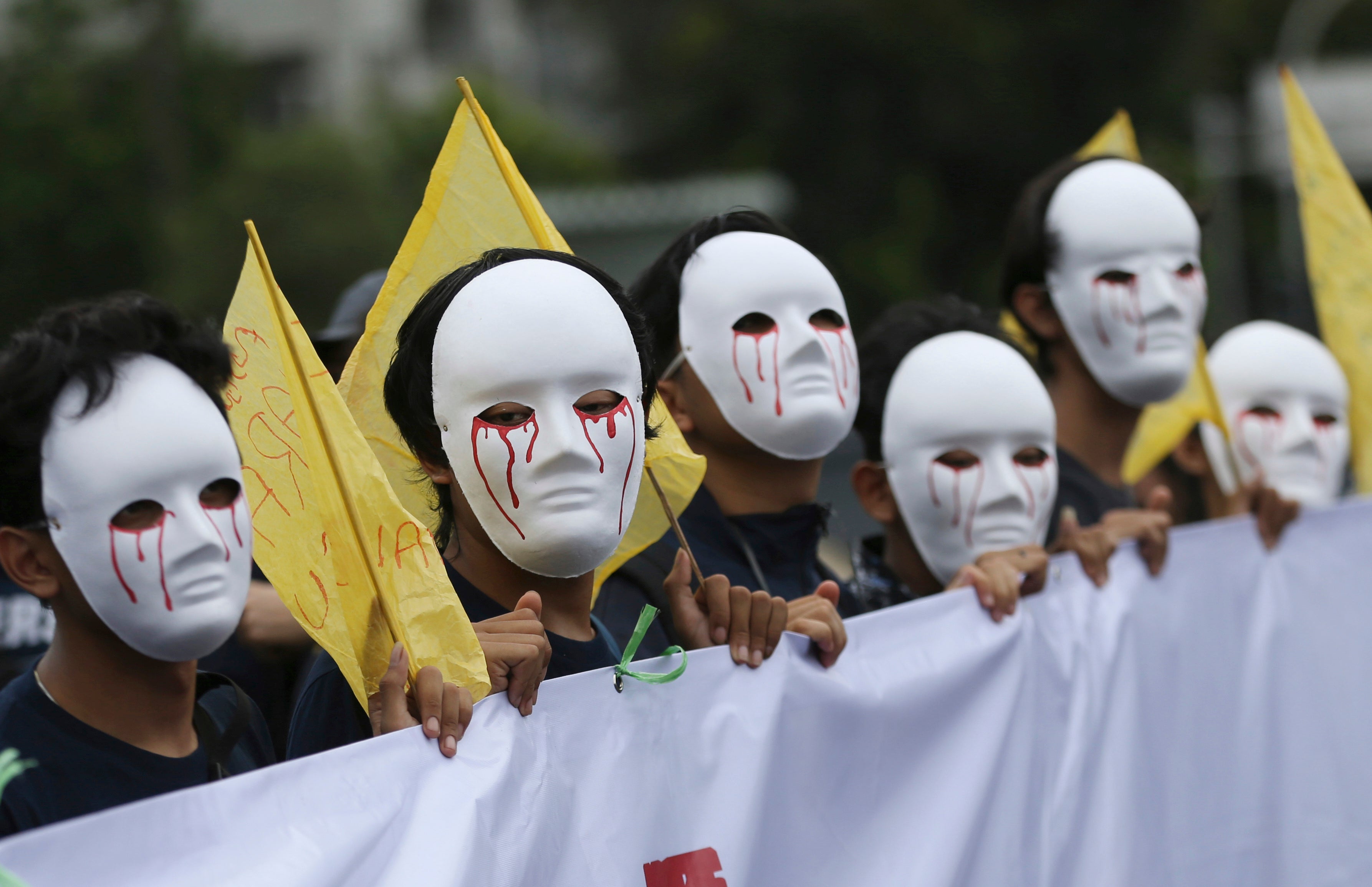 In Taiwan, several thousand workers were marching through the streets of Taipei, the capital, to demand better working conditions. They carried banners and flags and chanted for more days off and higher overtime pay.

Many wore baseball caps and colorful clear plastic ponchos over their clothes, though a light rain ended as the march got underway. Taiwan’s official Central News Agency said 6,000 people joined the march. 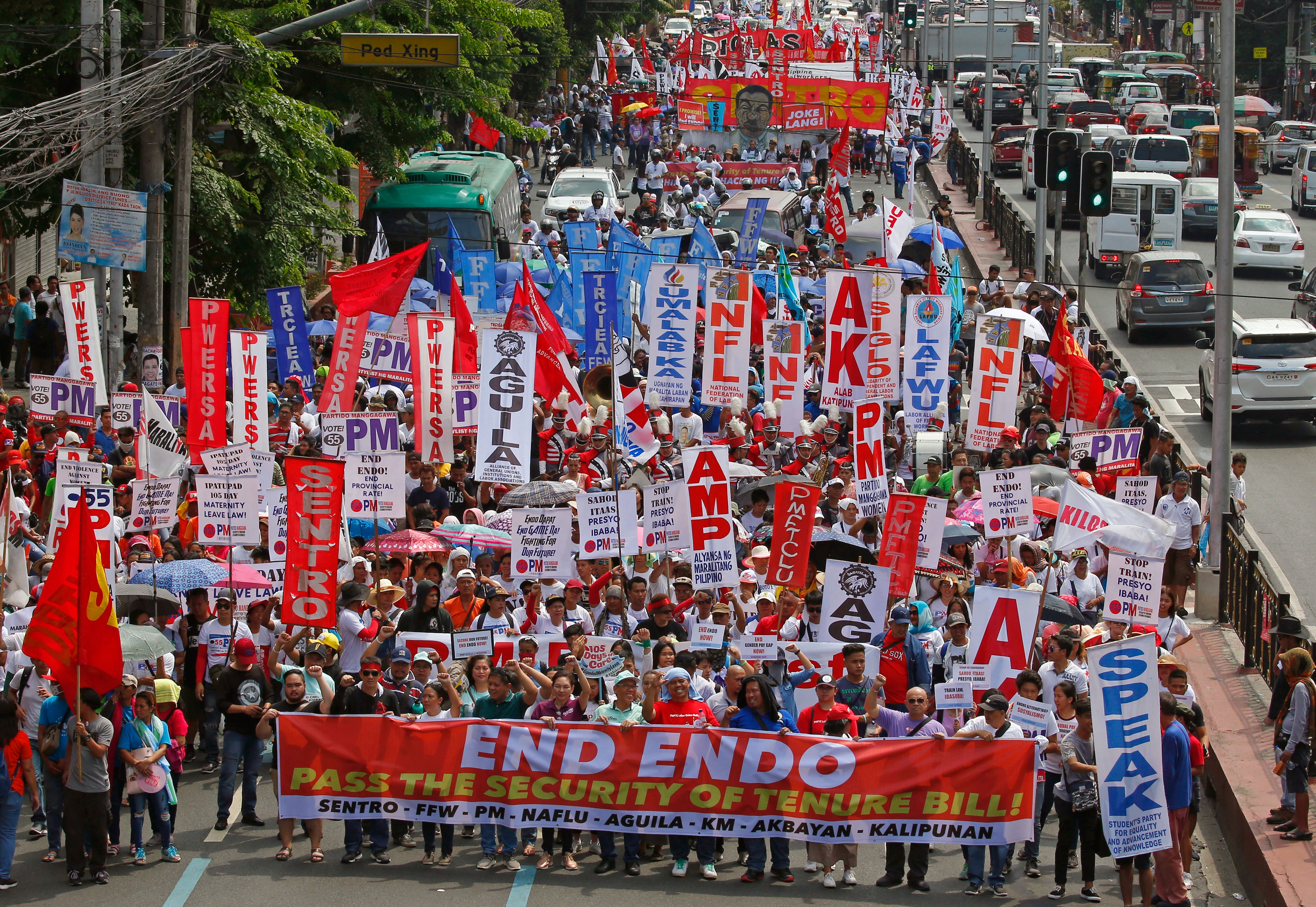 Thousands of workers march towards the Presidential Palace in Manila to pay tribute to workers in celebration of International Labor Day Wednesday, May 1, 2019 in the Philippines. The workers scored President Rodrigo Duterte allegedly for reneging in his campaign promise three years ago to end temporary hiring known as “contractualization” or “ENDO (End of Contract)”. (AP Photo/Bullit Marquez)

In the Philippines, thousands of workers and labor activists marched near the Malacañang presidential palace in Manila. They demanded that the government of President Rodrigo Duterte address labor issues including a minimum wage increase and the end of contractualization for many workers.

Police said about 5,000 people joined the march, which comes just over a week before senatorial elections are held in the country. One labor group said its members would not vote for any candidate endorsed by Duterte and burned an effigy of Duterte. /kga