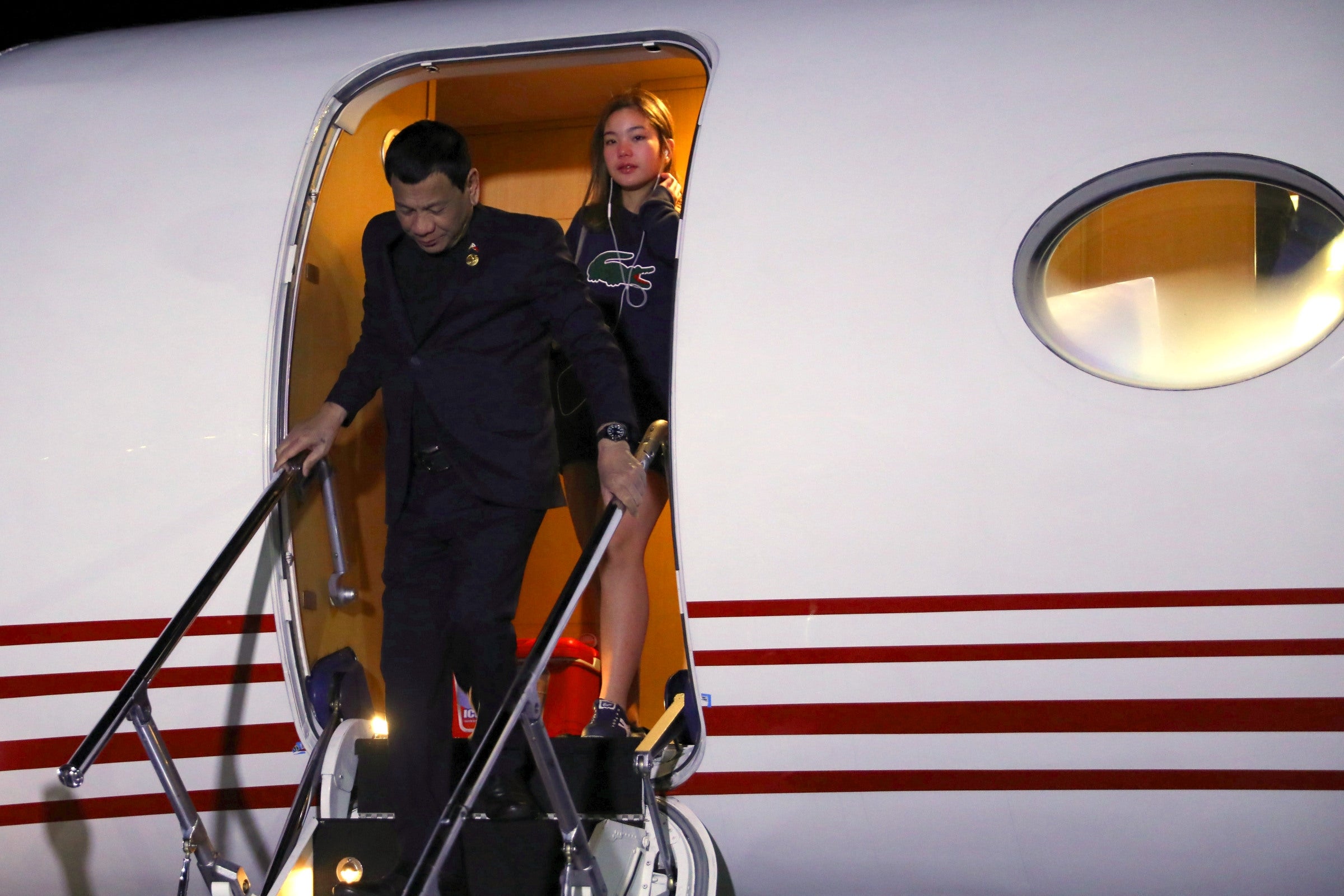 COMINGHOME President Duterte returns to Davao City early on Sunday after what Malacañang said was a productive visit to
China. Behind him is his daughter Veronica. —MALACAÑANG PHOTO

MANILA, Philippines — President Rodrigo Duterte’s fourth visit to China, which he did amid tensions in the South China Sea, was “highly successful,” putting forward national security and interest while boosting ties with the rising Asian economic power, Malacañang said on Sunday.

The President arrived in his hometown Davao City early on Sunday after attending the second Belt and Road Forum for International Cooperation in Beijing last week.

He had separate bilateral meetings with Chinese President Xi Jinping and Prime Minister Li Keqiang, during which he reaffirmed commitment to friendship and understanding with China, presidential spokesperson Salvador Panelo said in a statement issued after the President’s arrival.

“President Duterte reiterated to President Xi his resolve to endeavor to make the South China Sea a sea of peace, stability and prosperity. He expounded the need for both countries to exercise restraint and caution to avoid actions that complicate situations,” Panelo said.

Xi has stood pat on China’s position not to recognize the 2016 ruling by the UN Permanent Court of Arbitration in favor of the Philippines in a challenge to China’s claim over nearly all of the South China Sea.

China, however, was willing to deal with the Philippines’ protests against the presence of the Chinese maritime militia around Pag-asa Island in the Spratly archipelago and the harvesting of giant clams by Chinese fishermen at Panatag Shoal, Philippine ambassador to China Jose Santiago Sta. Romana earlier said.

The two countries agreed to keep the diplomatic lines open to tackle their rival claims in the South China Sea and work together in areas of cooperation, he said.

For instance, he said, the guidelines for a joint search for oil and gas in the West Philippine Sea — the waters within the country’s 370-kilometer exclusive economic zone in the South China Sea—are now being prepared.

“The Philippines and China expressed hope for an early conclusion of an effective and substantive code of conduct in the South China Sea, which will be a vital instrument for the maintenance of peace and stability in the Asia-Pacific region,” Panelo said.

Besides the Philippines, Brunei, Malaysia and Vietnam are also contesting China’s claim of owning almost the entire South China Sea.

The President oversaw the signing of 19 business agreements with Chinese companies valued at $12.2 billion covering a wide range of investment, including energy, infrastructure, internet connectivity, agriculture and training for Filipinos working  in China, he said.

According to Panelo, those business deals are expected to generate more than 21,000 jobs for Filipinos.

During a closed, high-level meeting, Panelo said Mr. Duterte highlighted the contributions of migrant workers to the development of home and host countries, and advocated for their protection and welfare.

The President also pitched for development assistance based on reciprocal benefits, Panelo said.

At the Leaders’ Roundtable Sessions, the President, according to Panelo, batted for sustainable and peaceful use of the oceans and seas and welcomed economic investment that would help the Philippines improve its  agricultural productivity and infrastructure development.

The President also pushed for cooperation in infrastructural, agricultural, green technology and renewable energy development as concrete plans for action.

Panelo said the President also expressed grave concern over the impact of more frequent, intense and disruptive weather in developing countries like the Philippines, stressing the need for greater principled, concerted and collective action on climate change.

During the Belt and Road Forum, which drew 5,000 participants from 150 countries, Xi sweetened his global infrastructure plan by tackling issues that typically unnerve investors, vowing to champion trade liberalization, keep the renminbi stable, and back off from “beggar thy neighbor” economic policies.

He also pledged to crack down on violation of intellectual property rights, value multilateralism as much as bilateral and trilateral cooperation, support environment-friendly, transparent and corruption-free projects, and ensure debt sustainability for participating countries.

Xi urged other world leaders to “sow the seeds of cooperation, harvest the fruits of development, bring greater happiness to our people, and make our world a better place for all.” —With a report from Julie M. Aurelio

Read Next
PH joins China, Russia, US in maritime drills in S. Korea
EDITORS' PICK
LTO’s P500-M deal for screws draws scrutiny
Smart reinforces superiority with best speed and mobile video experience in PH
Every Filipino home can now be a smart home with realme TechLife
Nestlé Philippines’ ‘NESCAFÉ Plan’ bags Grand Anvil at PRSP 56th Anvil Awards
New 3,045 COVID-19 cases push PH total active cases to 40,074
How to lose a PH genius: Wesley So officially a US citizen
MOST READ
Robredo on Sara Duterte leading poll surveys: Why are Filipinos drawn to leadership of this kind?
How to lose a Filipino genius: Wesley So officially a US citizen
Hugpong Ng Pagbabago fully supports Sara Duterte says confidant Davao del Norte governor
Duterte on his ‘faults’: ’I just have cases of extrajudicial killings’
Don't miss out on the latest news and information.