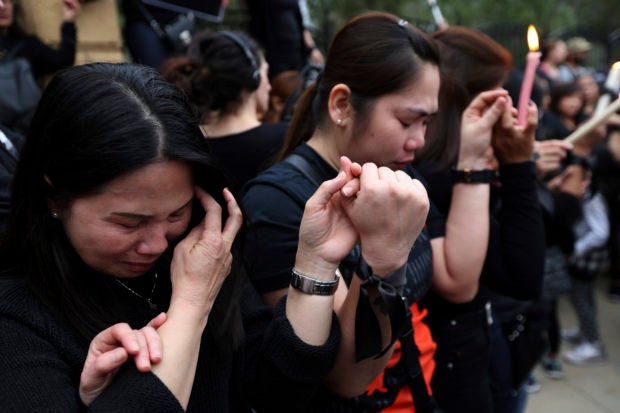 Women from the Philippines react, outside of the presidential palace in Nicosia, Cyprus, Friday, April 26, 2019. Up to 1,000 people turned out in front of Cyprus’ presidential palace to remember the five foreign women and 2 girls that a military officer has confessed to killing in what police are again calling “an unprecedented crime.” AP

NICOSIA, Cyprus — Search teams in Cyprus located two suitcases at the bottom of a lake where a detained military officer who allegedly confessed to killing seven foreign women and girls told investigators he dumped some of the bodies, officials said Saturday.

Officers spotted the possible evidence with a robotic camera that will be used to keep scouring the man-man lake for a third suitcase suspected to be under water, Fire Service Chief Marcos Trangolas said.

The suspect, a 35-year-old National Guard captain, said under questioning he put the bodies of three victims inside luggage that he ditched in the lake, a police official told The Associated Press.

The official spoke on condition of anonymity because he was not authorized to disclose details of an ongoing investigation.

The lake, located some 32 kilometers (20 miles) west of Cyprus’ capital of Nicosia, is part of an abandoned copper pyrite mine where a woman’s body was found in a flooded shaft on April 14.

The discovery triggered a homicide investigation that led to the captain’s arrest before a second woman’s body was found in the mineshaft on April 20. Police said the suspect admitted killing them both.

But police said the scope of case sickeningly expanded when the suspect told them Thursday about four more victims, bringing the total to five women and two of their daughters.

The suspect has not been named because he has not been charged yet. He faces charges including premeditated murder and kidnapping for alleged crimes dating back to September 30, 2016.

Police told a judge at a court hearing on Saturday the suspect gave details of the slayings in 10 handwritten pages. The judge ordered him held for eight more days.

The Cyprus News Agency reported that he is married with two children but separated from his wife. The news agency said investigators found photos of the mineshaft where the in his possession.

Shocked Cypriots are grappling with the mounting evidence from police that a serial killer was in their midst preying on women who came to work on the east Mediterranean island nation.

Hundreds of people turned up for a protest vigil outside the presidential palace Friday to mourn the victims and to question if authorities failed to adequately investigate when women who worked as housekeepers or in low-paying jobs were reported missing.

In a poignant moment, a group of tearful Filipino women held lighted candles and bowed their heads in prayer for the three women and one girl of Filipino descent who are believed to be among the dead.

The child is the 6-year-old daughter of the first woman found at the mine, Mary Rose Tiburcio, 38. Both had been missing since May of last year.

Investigators zeroed in on the captain as a suspect based on online chat communications between him and Tiburcio during a six-month relationship.

Cypriot media have identified the other victim from the mineshaft as 28-year-old Arian Palanas Lozano, also from the Philippines.

During the Thursday interrogation that produced four more potential victims, the suspect provided directions to a military firing range where police found decomposed remains in a pit within hours.

The captain thought the woman he killed and discarded in the pit was of Nepalese or Indian descent, according to police. At Saturday’s court hearing, an investigator said she might have been Ashita Khadka Bista, from Nepal.

Cypriot police think the other three victims they know about so far are a 31-year-old Filipino woman who has been missing since December 2017, Maricar Valtez Arquiola, and a Romanian mother and daughter.

Cypriot media identified the mother as Livia Florentina Bunea, 36, and her 8-year-old daughter as Elena Natalia Bunea. The two are believed to have been missing since September 2016. /cbb