MANILA, Philippines – The third batch of Filipinos who were repatriated from Tripoli, Libya has arrived in Manila, the Department of Foreign Affairs (DFA) said Friday.

Chargé d’Affaires Elmer Cato said eight overseas Filipino workers (OFWs) arrived at the Ninoy Aquino International Airport (NAIA) through the assistance of DFA and the Department of Labor and Employment. 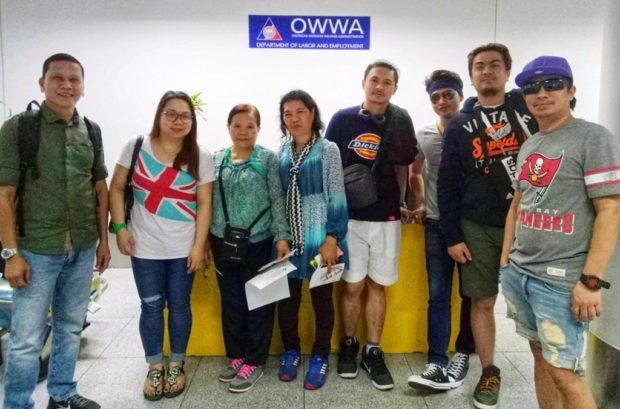 BACK HOME. The latest batch of Filipino workers in strife-torn Libya arrive in Manila on Friday. Photo courtesy of DFA

The group was evacuated from the Libyan capital and brought to Tunis on Wednesday where they boarded a flight to Manila.

And they’re finally home! The third batch of eight Filipinos from Tripoli repatriated by @PhinLibya, @DFAPHL and @doleph have arrived at the Ninoy Aquino International Airport in Manila. @teddyboylocsin pic.twitter.com/3zJanAB8gX

With the arrival of the third batch, the number of repatriated Filipinos from Libya climbed to 19

19 Filipinos have so far been evacuated from the strife-torn nation since repatriation efforts started on April 4.

Cato on Friday told INQUIRER.net that 41 Filipinos in Libya have since requested to be repatriated to the Philippines.

Cato, however, said that the Philippine Embassy has to double its efforts to convince the more than 1,000 Filipinos who are still in Tripoli.

Eight Filipinos evacuated from Tripoli are now enroute to the Philippines. With only 19 repatriations since latest conflict erupted on April 4, @PhinLibya is doubling its efforts to convince the more than 1,000 Filipinos still in Tripoli to go home. @teddyboylocsin @DFAPHL pic.twitter.com/EfaEUEVGlM

Two Filipinos have also sustained injuries due to hostilities in the North African country.

On Tuesday, a Filipino worker was wounded when a mortar round fell in their compound near the Tripoli International Airport and exploded.

Alert level III is currently raised in Tripoli and several districts in Libya in the wake of the continuing violence near the country’s capital. /gsg