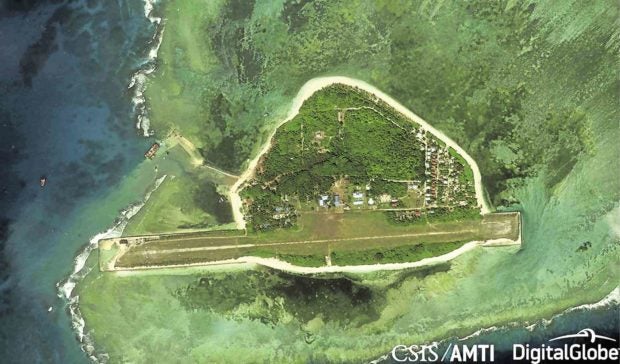 Reclamation work on the Philippine-occupied Pagasa (Thitu) Island in the South China Sea can be seen in these satellite images provided by Asia Maritime Transparency Initiative.

MANILA, Philippines — China assured the Philippines it would not occupy the Pag-asa Island in the West Philippine Sea despite reports that Chinese militia vessels had swarmed the island, the Philippines top envoy in Beijing said Wednesday.

But despite this assurance Philippine Ambassador to China Jose Santiago Sta. Romana said the Duterte administration must “trust but verify.”

“In terms of Pag-asa, through the diplomatic discussions, the Chinese have sought to reassure us that they have no intention to use force or to occupy Pag-asa. So they have assured us,” Sta. Romana told Filipino reporters in Beijing.

“But you know, the diplomatic action is take them on their word but verify and keep your vigilance high. So trust but verify. So this is our attitude. We welcome any reassurance of you know, that there won’t be any act of force against our people, against our soldiers,” he added.

He said the government must “remain vigilant” despite China’s assurance.

“We combine diplomacy with deterrence. And that’s why you still have to build your capability in terms of deterrence,” he said.

Hundreds of Chinese vessels, believed to be part of a maritime militia, swarmed the Philippine-occupied Pag-asa Island in the Kalayaan Group of Islands in the West Philippine Sea in late March.

“Our position is that KIG — the Kalayaan Island Group — belongs to the Philippines. The Chinese position is opposite: They claim all of the Spratlys. So we have basic differences, but we have agreed that we should deal with these differences through peaceful and diplomatic means,” Sta. Romana said.

He said disputes between the Philippines and China were discussed through the bilateral consultative mechanism, which has been going on since 2017.

He said Manila and Beijing had “differences on the issue of sovereignty.”

“The Chinese have also given the reassurance that the traditional fishing rights of the Filipino fishermen there will be safeguarded, together with those of the Chinese,” he said.

The Chinese have driven away Filipino fishermen in the Wes Philippine Sea in several incidents as Beijing continued with its incursion in the disputed sea.

The Philippines sealed a historic win against China before the Permanent Court of Arbitration in The Hague in July 2016, which invalidated Beijing’s sweeping claims to almost all of the South China Sea.

China, however, has refused to recognize the ruling.