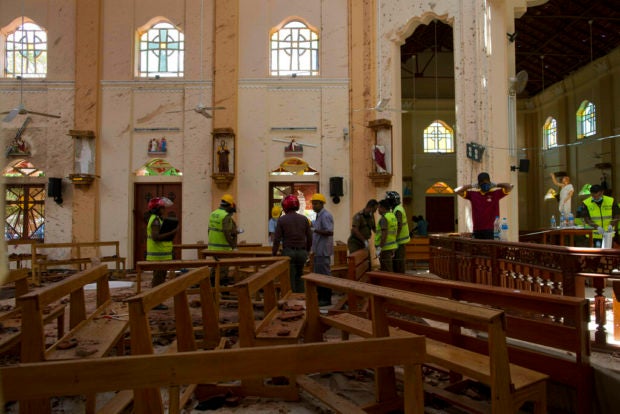 Investigators at the scene of a suicide bombing at St. Sebastian Church in Negombo, Sri Lanka, Monday, April 22, 2019. Easter Sunday bombings of churches, luxury hotels and other sites was Sri Lanka’s deadliest violence since a devastating civil war in the South Asian island nation ended a decade ago. (AP Photo/Gemunu Amarasinghe)

MANILA, Philippines — There were no Filipinos among the 290 people killed and more than 500 others wounded in the series of suicide bomb attacks on churches and hotels in Sri Lanka on Easter Sunday, the Department of Foreign Affairs (DFA) reported on Monday.

The Philippines has no embassy in Sri Lanka.

The closest embassy, the one in Bangladesh, said it checked the situation of Filipinos from Philippine Honorary Consul to Colombo Hugh Dissanayake.

“The community leaders reported that so far there has been no report of any Filipino hurt in the explosions,” Philippine Ambassador to Bangladesh Vicente Bandillo reported to the DFA.

The DFA has extended its condolences to the families of the victims.

“A river of blood and a rain of children’s limbs. Unbelievable,” Foreign Secretary Teodoro Locsin Jr. tweeted on Sunday, quoting a New York Times story on the bombings.

Locsin said he would have wanted the Philippines to join other countries that showed their solidarity with the victims by dimming the lights of their landmarks.

The Philippines has no landmark, Locsin said, “but we can ask to turn off the lights of all tall buildings in our capital to show solidarity. It’s a great idea.”