7 Filipinos on the way home from strife – torn Libya 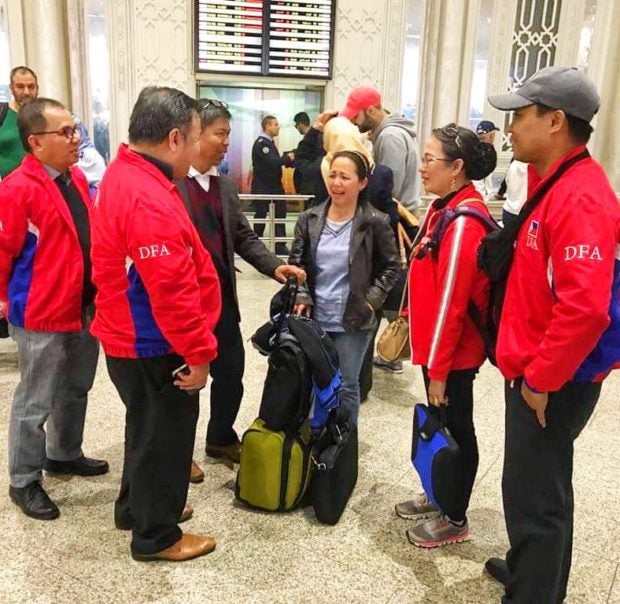 The three Filipinos who opted to be repatriated from Libya are assisted by a team from the Department of Foreign Affairs at the Tunis Carthage International Airport on Thursday, April 18, 2019. Four more Filipinos are scheduled to fly back to Manila on Saturday. Photo courtesy of DFA.

MANILA, Philippines — Seven Filipinos were repatriated from strife-torn Libya the other day, with three of them scheduled on Thursday to fly home to Manila, the Department of Foreign Affairs (DFA) said.

Chargé d’Affaires Elmer Cato said the three Filipinos were assisted by a team from the DFA before boarding their Manila-bound flight at the Tunis Carthage International Airport.

The three were among the seven Filipinos who were evacuated from Tripoli on Wednesday and brought to Tunis.

“Another four will be repatriated from Tunis on Saturday,” Cato said in a tweet.

The first three Filipinos evacuated from Tripoli by @PhinLibya are assisted by a team from @DFAPHL at the Tunis Carthage International Airport before boarding their flight to Manila on Thursday. Another four will be repatriated from Tunis on Saturday. @teddyboylocsin pic.twitter.com/5gLLuepOPo

In an interview with INQUIRER.net on Thursday, Cato said DFA shoulders airfare and meals of repatriated Filipinos, as well as their accommodations while waiting for their flight back home.

“Upon arrival in the Philippines they can avail themselves of assistance extended by DOLE,” Cato said.

Cato also continued his appeal for Filipinos in Libya to have themselves repatriated before the situation in the country worsens.

Currently, Alert Level 3 is raised in the country’s capital Tripoli, and several other districts. /gsg