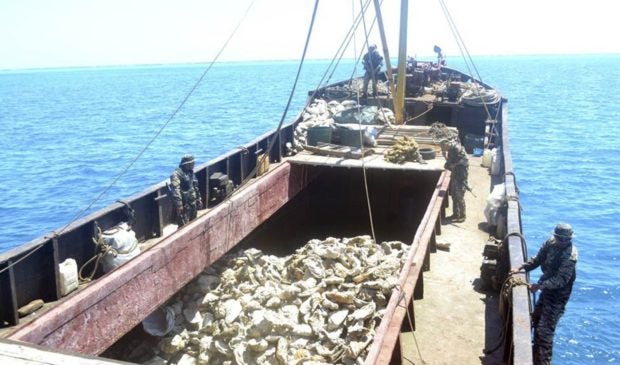 INTERCEPTED A Philippine Navy photo released in April 2012 by the Department of Foreign Affairs shows Filipino troops inspecting a Chinese fishing vessel loaded with giant clams after it was intercepted off Panatag (Scarborough) Shoal. The DFA on Tuesday said Chinese poachers were again caught engaging in destructive activities in the shoal recently, prompting Manila to send a diplomatic note to Beijing. —PHOTO COURTESY OF DFA

Also on Tuesday, the Integrated Bar of the Philippines (IBP) and a group of fishermen from Palawan and Zambales provinces asked the Supreme Court to order the government to prosecute foreign poachers and land reclamation contractors in the West Philippine Sea.

West Philippine Sea is the local name of the waters within the country’s 370-kilometer exclusive economic zone in the South China Sea.

Locsin said the legal office of the Department of Foreign Affairs (DFA) was preparing its case against China for causing serious environmental damage to the shoal. (See related story on A11)

“We just caught them doing that recently, filed a diplomatic note, and will be taking legal action,” Locsin said on Twitter.

In an interview with CNN Philippines on Tuesday, he said the National Task Force for the West Philippine Sea had verified the destructive activities of Chinese vessels at Panatag.

“We protest this. We said this is illegal and in fact you (China) are also violating conventions on environmental protection for which we can take legal action,” Locsin said. “They have basically destroyed breeding grounds.”

“As far as we’re concerned, that (Panatag Shoal) is ours. We will be objecting to any intrusion to our own territory,” said presidential spokesperson Salvador Panelo.

In its petition, the IBP, the largest association of lawyers in the Philippines, criticized the government for failing or refusing to enforce the international arbitral court’s ruling in 2016 that nullified China’s claim to virtually the entire South China Sea while upholding Philippine sovereignty over the West Philippine Sea.

China has ignored the ruling.

“Clearly, the damage is brought upon by lack of enforcement of Philippine environmental laws,” it said.

A maritime law expert and an environmental group also urged the government to take legal action against Chinese fishermen who harvested the giant clams at Panatag.

The “outrageous” collection of the giant clams could be another case against Beijing that Manila could take to the Permanent Court of Arbitration, said Jay Batongbacal, director of the University of the Philippines Institute for Maritime Affairs and Law of the Sea.

“This is nothing less than an environmental crime that is being perpetrated by China and its agencies,” Batongbacal said in an interview with the Inquirer.

Aside from the possible arbitration case, he said the Philippine government might also request a provisional measure from the International Court of Justice to call on China to stop its destructive activity.

Batongbacal said the Philippines could call out China “for being a state sponsor of illegal, unreported and unregulated fishing” and urge other countries to stop trading with the Asian powerhouse, particularly for fisheries and marine products.

Giant clams are listed under the Convention on International Trade in Endangered Species of Wild Flora and Fauna, and are considered vulnerable species by the International Union for Conservation of Nature due to various threats, such as overfishing, pollution, climate change and poaching.

Batongbacal said the government should pursue the cases against the Chinese fishermen, as well as Chinese coast guards and demand that Beijing turn them over for prosecution.

“This is such a clear and blatant violation of our laws,” he said. “It is an obvious slap in the face against us.”

For two weeks now, the Philippines has been vocal about China’s activities in the maritime territories claimed by the country.

Malacañang and the DFA have issued strongly worded statements against China for “swarming” the Philippine-occupied Pag-asa (Thitu) Island with nearly 300 Chinese vessels since January.

President Duterte himself has told China to “lay off” Pag-asa, the biggest of nine islands and shoals occupied by Filipinos in the South China Sea, saying that if the Chinese “touched” it, he would deploy troops on a “suicide mission” in response.

Locsin said he had filed a diplomatic protest for every incident reported by the West Philippine Sea task force and that the DFA invoked the international arbitral court’s ruling each time.

He admitted that the DFA did not take it well when the arbitral victory was “downplayed.”

Mr. Duterte has set aside the ruling in favor of enhancing ties with China, hoping that the Philippines would get more aid and investments from the economic giant.

Read Next
Del Rosario: US brokered talks to end 2012 Panatag standoff
EDITORS' PICK
Palace: Free speech can’t be suppressed but such right is ‘not absolute’
Cherry Mobile teams up with Cloud Panda PH, launches online store
6 LTO offices in Metro Manila closed to public for ‘double disinfection’
Duterte’s decision to terminate VFA unchanged—Palace
COOCAA TV Bounce Back Sale offers up to 50% off
SMDC The Good Guys on the Go
MOST READ
It’s final: Anti-Terror Bill now only needs Duterte’s signature
Piolo gets first call slip from ABS-CBN to resume ‘ASAP’ taping
‘She had no right to be in Singapore’: Youth pleads guilty to abusing Filipino maid
Duterte’s decision to terminate VFA unchanged—Palace
Don't miss out on the latest news and information.

Palace: Free speech can’t be suppressed but such right is ‘not absolute’