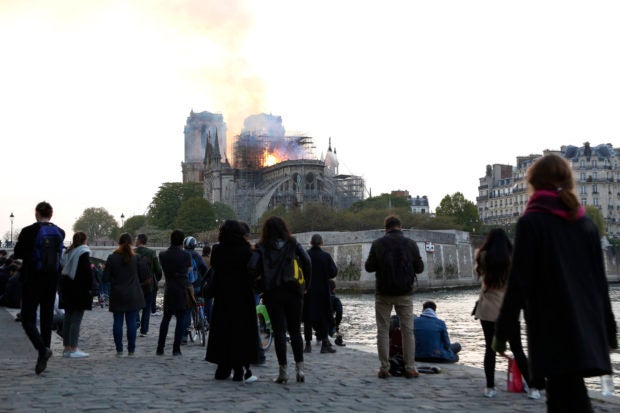 People standing on the banks of the river Seine watch as flames and smoke rise from Notre Dame cathedral as it burns in Paris, Monday, April 15, 2019. Massive plumes of yellow brown smoke is filling the air above Notre Dame Cathedral and ash is falling on tourists and others around the island that marks the center of Paris. (AP Photo/Thibault Camus)

MANILA, Philippines – Malacañang on Tuesday joined world leaders in expressing sorrow over a massive fire that gutted the roof of Notre Dame Cathedral in Paris, France.

In a statement, Presidential Spokesperson Salvador Panelo said “the Palace is deeply saddened and bothered” by the fire that hit the popular Paris landmark.

“Thousands of various races have at one time or another stood either by themselves or with their families or friends in front of this historic cathedral and marvel at its architectural grandeur,” Panelo said.

“Their sojourn there left beautiful memories engraved in their hearts and recorded in photographs. Pain and sorrow were felt by the millions upon hearing the catastrophic fire of the Notre Dame place of worship,” he added.

The fire at Notre Dame Cathedral, which was featured in Victor Hugo’s classic novel “The Hunchback Of Notre-Dame” and is also a Unesco World Heritage site, broke out Monday evening and was placed under control several hours later.

Panelo noted that the world-famous cathedral is an “architectural treasure, (a) symbol of Catholicism which housed several historical artifacts, and beloved icon immortalized by French novelist Victor Hugo through one of his novels.”

“Our thoughts and prayers are with the people of France as well as in solidarity with the rest of the world for this heartbreaking incident,” Panelo said.

“We wish the French nation all the best as they undertake efforts to rebuild this great monument in Paris restored to its majestic sight,” he added. /gsg