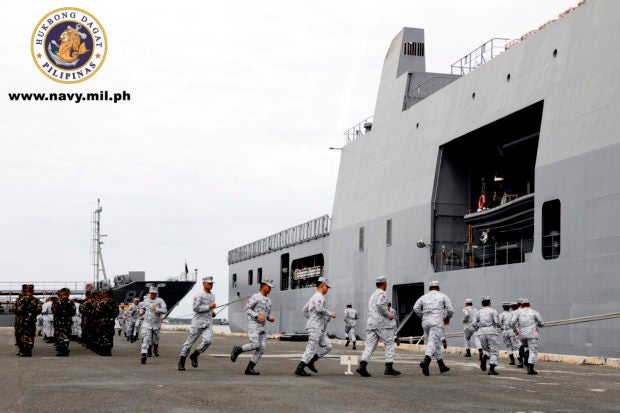 Navy personnel board the BRP Tarlac (LD-601) before setting sail for Qingdao, China, to participate in the fleet review for the 70th anniversary of the People’s Liberation Army Navy from April 22 to 25. PHILIPPINE NAVY PHOTO

MANILA, Philippines — The Philippine Navy has sent off one of its ships to attend China’s multinational fleet review.

This will be the first time that the Philippine Navy will send its ship to a Chinese fleet review. Other navies in the world are expected to attend the event.

The 400-man Philippine contingent is led by Capt. Francisco Tagamolilla.

“Aside from LD-601, it is composed of a helicopter detachment, (Philippine Military Academy) cadets from the graduating class of 2019, and student officers from studying under various naval training programs,” Navy spokesperson Capt. Jonathan Zata said in a statement.

The contingent is scheduled to participate in courtesy calls, professional exchanges, shipboard reception and tour, friendly games and cultural exchanges during their stay in China.

“Sending naval contingents to international naval engagements is a prime opportunity to further increase the skills of navy personnel and the capacity of the organization to extend its operational reach for a stronger and more credible navy,” Zata said.

The celebration is expected to show off China’s growing naval might and to display a friendlier image to its counterparts despite its activities in the South China Sea.

The visit comes amid the Philippine government’s criticisms of China’s presence around Pag-asa Island (Thitu) and other features in the West Philippine Sea.

Navy chief Vice Adm. Robert Empedrad said sending a contingent to China’s event was “to demonstrate our country’s commitment to take that extra mile and then take another extra step, towards a peaceful, stable, and rules-based order in Southeast Asia.”

“It is the Philippine Navy’s way in undertaking a calibrated and nuanced engagement process with the People’s Liberation Army Navy in an effort to build trust between two professional navies. I am confident that such process will receive welcome traction and will definitely evolve to a more open and more friendly relationship towards that extra step in addressing bilateral concerns on the ground in a more trustful manner,” he was quoted as saying. /cbb