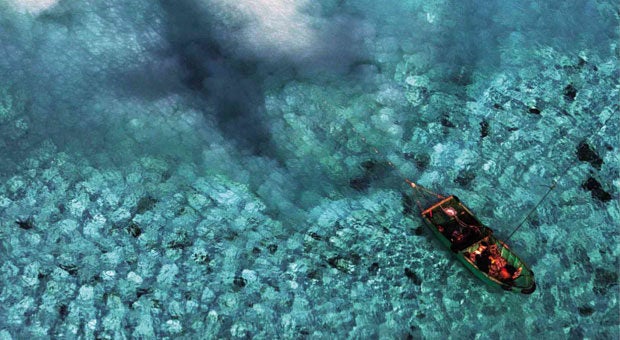 In this March 2014 photo, a Chinese boat can be seen scraping coral reef and giant clams inside the Scarborough Shoal. INQUIRER FILE

MANILA, Philippines — Foreign Affairs Secretary Teodoro Locsin Jr. said the government would be taking “legal action” against China over the reported harvesting of giant clams in the Scarborough shoal.

“We just caught them doing that recently, filed a diplomatic note, and will be taking legal action. With our legal department now,” Locsin said in a tweet on Tuesday.

This is a response to a Twitter user’s post which said: One is inclined to view this tragedy with great dismay, that Philippine national esteem is so weak as to allow arrogant marauders to do this.

A report by ABS-CBN was then attached to the tweet.

According to the report, Filipino fishermen said that Chinese vessels were “mass harvesting giant clams” in the Chinese-controlled shoal.

We just caught them doing that recently, filed a diplomatic note, and will be taking legal action. With our legal department now. https://t.co/sd6u87LnTq

Earlier, Locsin had said that he “fired off a salvo of diplomatic notes” over the reported presence of Chinese vessels near Pag-asa island before his Beijing trip last March.

“[Before] going to successful China visit I fired off salvo of diplomatic notes so I would not be accused of insincerity if, as suggested,” he said in a tweet. /cbb