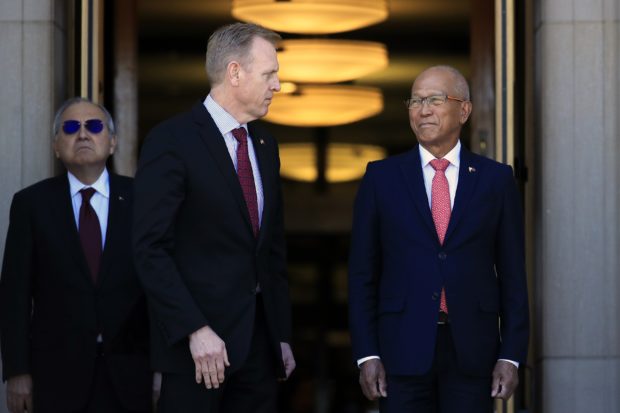 At the Pentagon where he met with acting US Defense Secretary Patrick Shanahan on Monday, Lorenzana was asked by American journalists about the situation in the South China Sea and China’s expanding dominance in the disputed area.

Lorenzana further said, “So it concerns us because they are encroaching on our EEZ.”

While Lorenzana expressed concern about China encroaching on the Philippine EEZ, Sen. Leila de Lima wondered why the government advised Filipino fisherfolk to stay away from a place they have every right to visit.

De Lima said the Duterte administration betrayed the Philippines when the Bureau of Fisheries and Aquatic Resources advised Filipino fisherfolk to avoid going to Panatag (Scarborough) Shoal in the meantime, following reports that the Chinese coast guard had harassed them.

She said the fisherfolk should be allowed to go to Panatag Shoal because the Permanent Court of Arbitration, acting on a Philippine complaint against China, ruled that they have traditional fishing rights in the resource-rich area.

“Instead of putting the welfare of our Filipino fishermen at the forefront and asserting the Philippines’ rightful claim over [the South China Sea], this government chose to betray the country and its victory again by maintaining its policy of kowtowing to China,” De Lima said in a statement.

At the Pentagon, Lorenzana also mentioned China’s interest in the cash-strapped shipbuilder Hanjin Heavy Industries and Construction-Philippines at Subic Bay in Zambales province.

“There are two Chinese shipbuilding companies which are interested from the get-go when they learned about the financial trouble of Hanjin and they’re waiting (on) the wings,” Lorenzana said.

He said other parties from the United States, Japan, Korea, Singapore, Indonesia and European countries had expressed interest in the shipbuilding facility.

“But if no one will be interested then we do not want others to come in. The country, the government of the Philippines, is ready to get in and run this shipyard,” Lorenzana said.

Since January, the defense establishment has been raising the possibility of a government takeover of Hanjin’s shipyard in Subic, considered the country’s most strategic port that serves as the major docking and anchorage area for the Navy’s large vessels.

Hanjin early this year filed for voluntary rehabilitation in an Olongapo City Regional Trial Court and sought government help in looking for investors to take over its shipyard operations.

Former Navy chief Alexander Pama previously raised the alarm on the possibility of Chinese companies, one of them state-owned, taking over Hanjin’s operations.

“Let’s be aware that this Hanjin shipyard issue is not just about business, financial and other economic issues. This is a very significant national security issue,” Pama said in a Facebook post in January. —Reports from Jeannette Andrade and Leila B. Salaverria