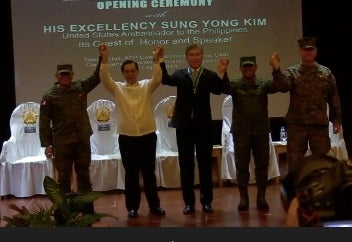 Philippine and US government and military officials grace the opening ceremony of the annual Balikatan exercises on Monday at Camp Aguinaldo. INQUIRER.net

MANILA, Philippines — The Philippines and United States on Monday started its annual military exercises, one of the largest under the Duterte administration.

The Balikatan exercises, which opened at Camp Aguinaldo, will have around 7,500 Filipino and American personnel with a small contingent from Australia.

The ten-day exercises will run up to April 12.

“Balikatan will strengthen our armed forces, improve our interoperability, and facilitate a robust exchange of ideas and best practices,” US Ambassador to Manila Sung Kim said in his speech.

After he won the presidency in 2016, Duterte vowed to scale back the presence of US forces in the country and even threatened to scrap the annual exercises.

The Balikatan exercises in the past two years shifted to urban terrorism and humanitarian assistance and disaster response activities.

This year, the annual drills would refocus on territorial defense but officials say it is not aimed at any country.

Asked if it’s directed at China, exercise director for the Philippine side Lt. Gen. Gilbert Gapay said this has long been planned

“It’s not directed to any threat or existing security concern. This is a generic exercise aimed at enhancing interoperability between Philippines and US forces,” said Gapay.

The Philippines and China are locked in a territorial dispute over the South China Sea.  / gsg