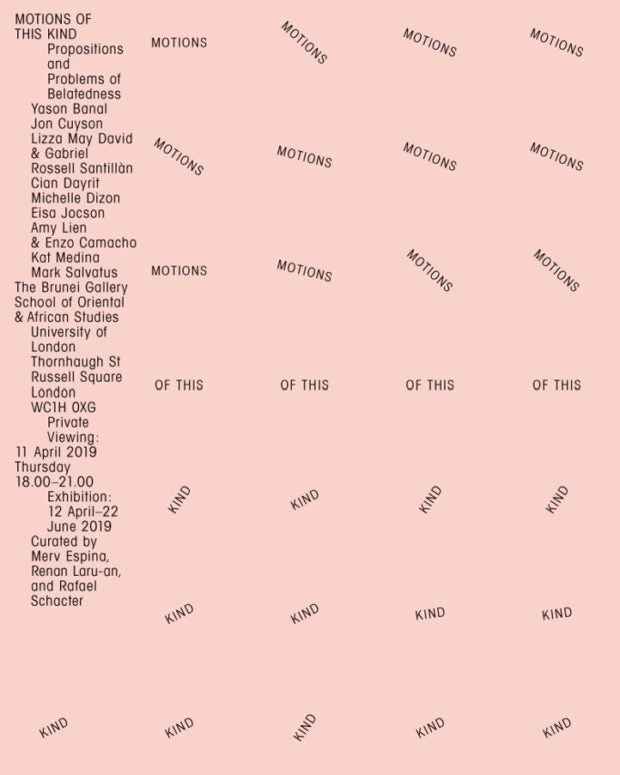 “Motions of This Kind” gathers 11 Philippine artist who will unravel the forces linking the Philippines to the world through their art. Photo and caption courtesy of the Philippine Embassy in London

MANILA, Philippines – Eleven Filipino contemporary artists will be part of an exhibit in London from April 11 to June 22, the Department of Foreign Affairs (DFA) said.

In a statement on Friday, the DFA said that the artists will showcase their works in a group exhibit entitled “Motions of This Kind: Propositions and Problems of Belatedness” at the Brunei Gallery at the University of London’s School of Oriental and African Studies (SOAS).

The said exhibition, the DFA noted, “features both newly commissioned work and materials from the Ifor B. Powell archive which have never been shown to the public before.”

The said group exhibit delves into the “historical and contemporary forces linking the Philippines with other global spheres in terms of social, political, and economic power,” the DFA said.

“We take pride in supporting this project.  Art is one of the most powerful ways to illustrate cross cultural connections,” he added.

The show, the DFA further noted, will include public programming consisting of artist Eisa Jocson’s first performance in the UK, experimental film screenings, and a colloquium at the SOAS on April 12. / gsg