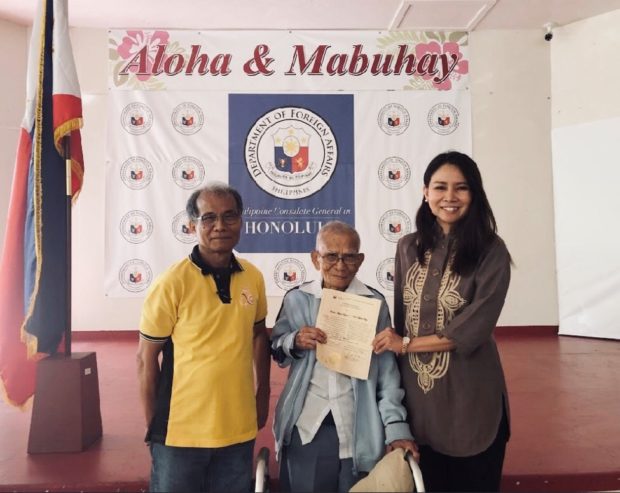 MANILA, Philippines – A 102-year-old Ilocano grandfather has reacquired his Filipino citizenship when he took his oath of allegiance at the Philippine Consulate General in Honolulu, Hawaii, the Department of Foreign Affairs (DFA) said.

In a statement released on Wednesday, the DFA said that centenarian Quirino Aglibut Bajet took his oath as a dual citizen before Deputy Consul General Angelica Escalona last March 7.

According to the DFA, Bajet “became emotional, particularly as he sang the Philippine national anthem.”

“His family said that he was very appreciative of the opportunity to become a Filipino citizen again,” it added.

“According to his daughter Remedios Pabo, Mr. Bajet has maintained an attachment to his country of birth. During his prime, he engaged in discussions with fellow Ilocanos in Hawaii,” the DFA said.

Bajet, the DFA added, “developed the habit of listening to local radio programs broadcast in Ilocano, and continues to watch Filipino programs on television.”

The Filipino centenarian’s daughter also shared that her father “never lost his taste” for Filipino dishes even after more than four decades of living in the U.S.

The DFA added that Bajet may qualify as a veteran centenarian under the Centenarians Act of 2016 upon the reacquisition of his Filipino citizenship, as per the Philippine Veterans Affairs Office and the Commission on Filipinos Overseas.

Under Republic Act No. 10868 or the Centenarians Act of 2016, additional benefits and privileges are granted to Filipino centenarians.

In 2017, the Philippine Embassy and the Commission on Filipinos Overseas (CFO) sent out a memo to Filipino centenarians living abroad, informing them to claim a monetary award of P100,000 cash (equivalent to around US$2,000).

To avail of the benefit, they must reach out to their consular jurisdictions and fill out an application. / gsg