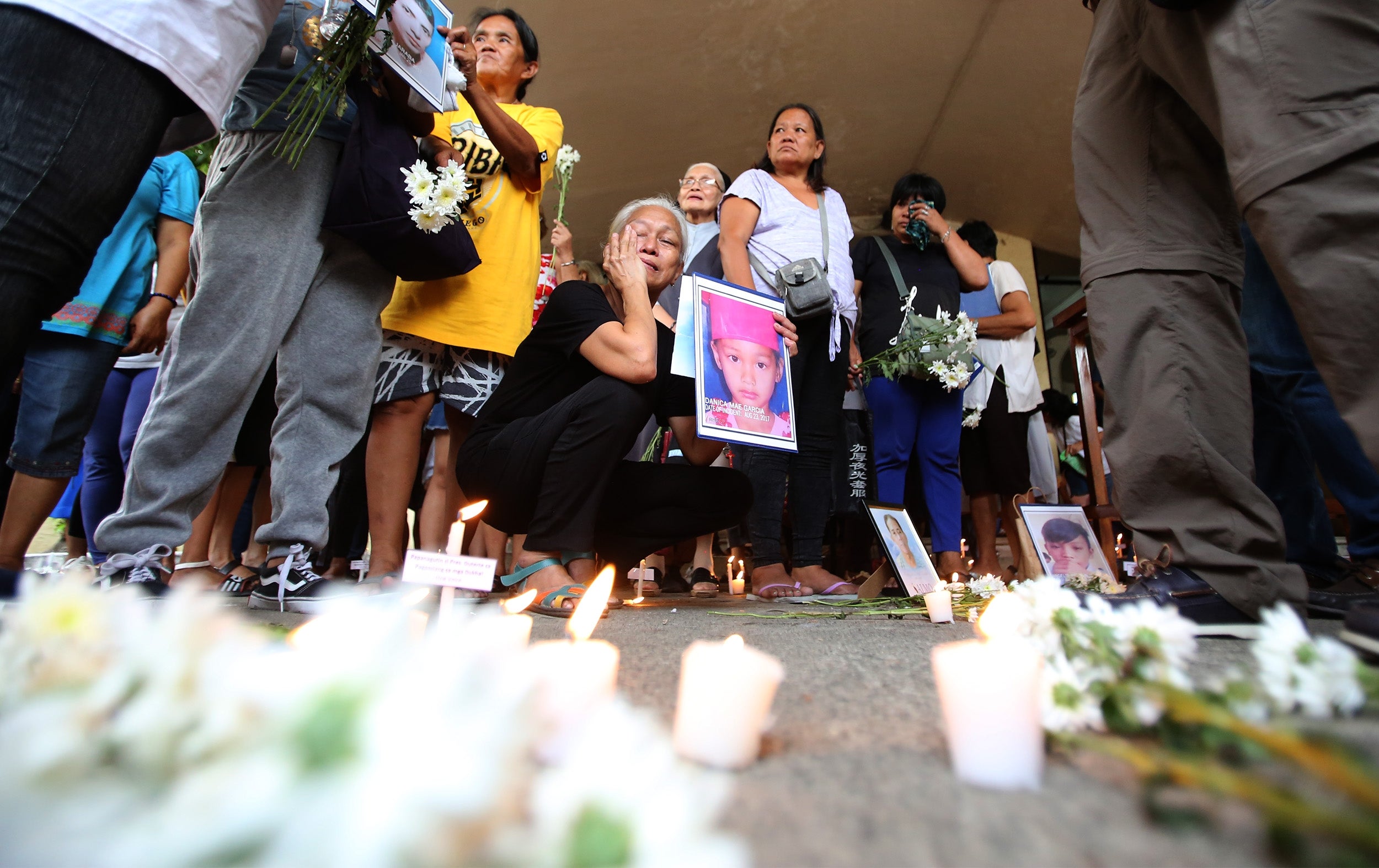 Normita Lopez has been mourning  the killing of her son for almost two years now and  hopes it won’t take forever to get justice for his death in the government’s brutal war on drugs.

Djastin Lopez, the second of her eight children, was one of the thousands gunned down by the police in what authorities now routinely call justified killing in a case of “nanlaban” (fought back) during a so-called drug buy-bust operation.

The weakly 23-year-old epileptic, who made a living by delivering scrap metal and wood to a junkyard, was killed by policemen on May 18, 2017, on the railway tracks of the poverty-stricken Hermosa neighborhood in Tondo, Manila.

When her murder and planting of evidence complaint against the officers involved continued to languish in the Office of the Ombudsman, Lopez joined the relatives of seven other drug war victims in filing a case accusing President Rodrigo Duterte of crimes against humanity in the International Criminal Court (ICC).

“When I sought out help after Djastin’s death, I realized we were so many,” she said. “So many of us had loved ones slaughtered like animals. So many of us are still grieving.”

Now, she and the others may have more reason to grieve after the Philippines’ membership in the ICC is bound to be terminated on Sunday — March 17 — one year after the Duterte administration withdrew from the Rome Statute that created the international court.

Human rights lawyer Neri Colmenares on Saturday said the climate of impunity could worsen as Manila’s withdrawal from the ICC may further embolden state forces to continue violating human rights in the belief that there was one less international body that could hold them to account for their actions.

“The most scary offshoot of the Philippines’ withdrawal from the ICC will be the worsening of extrajudicial killings, ‘tokhang’ and harassment of the administration’s critics, as well as the ordinary citizens,” the Bayan Muna chair and senatorial candidate said.

Nicholas Bequelin, regional director for East and Southeast Asia and the Pacific of Amnesty International, however, said such withdrawal should not stop the ICC from  holding liable those responsible for the killings in the drug war. 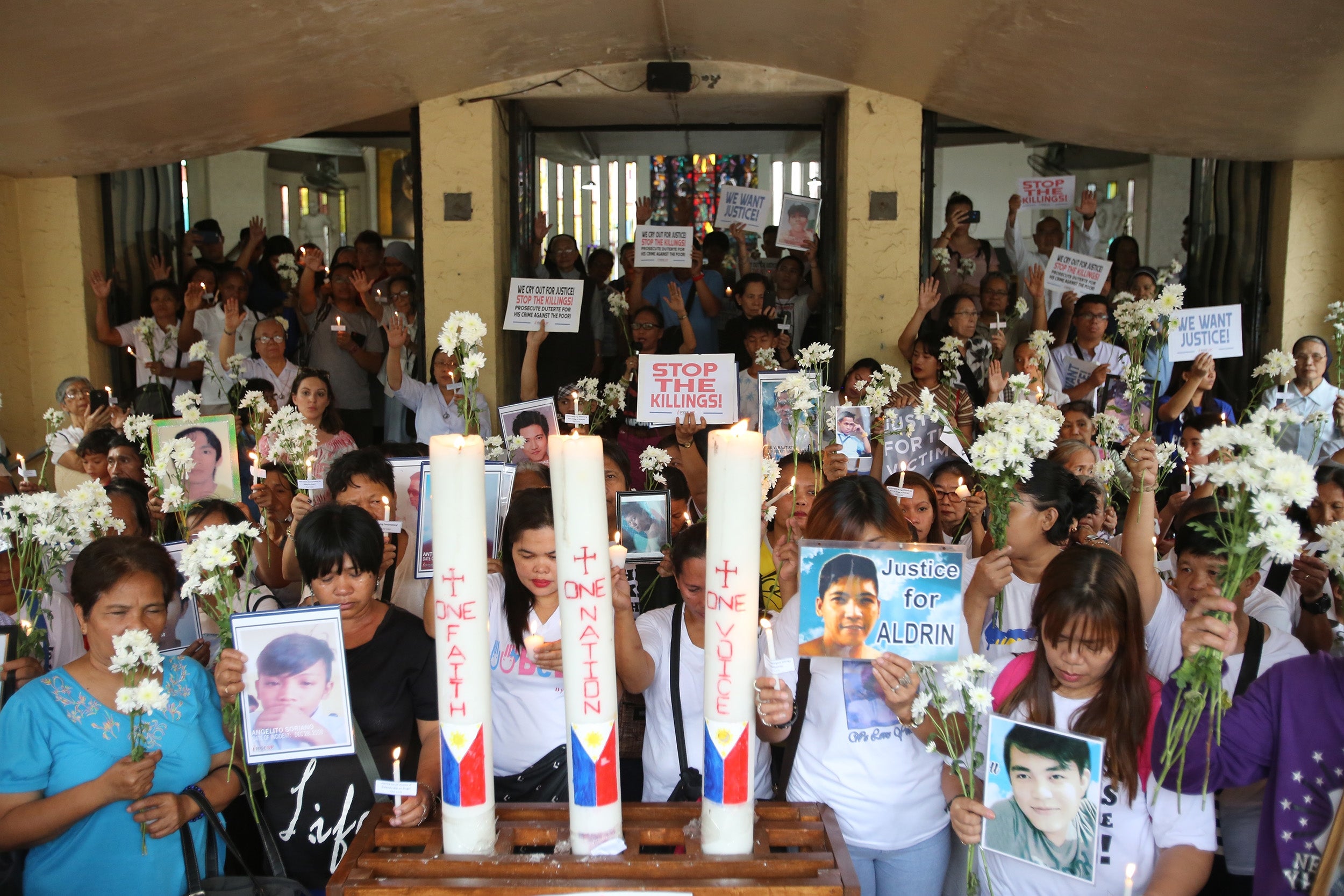 BONDING IN GRIEF At a March 15 gathering at Christ the King seminary in Quezon City, families who lost loved ones in the Duterte administration’s controversial campaign against drugs seek comfort in prayer and in each other. Some of the families are under the care of a legal advocacy group that has filed a complaint in the International Criminal Court on behalf of the grieving parents, widows and orphans. —Joan Bondoc

“Filipinos bravely challenging the ‘war on drugs’ or seeking justice for their loved ones need international support to help them end this climate of fear, violence and impunity,” Bequelin said in a statement.

The President pulled the country out of the ICC after its prosecutor announced last year the start of a “preliminary examination” of the charge of crimes against humanity filed against the President, including the first one submitted by lawyer Jude Sabio, whose case covers alleged extrajudicial killings since 2016.

Lopez, the grieving mother, held the President personally responsible for the deaths of her son and the others.

“All of these deaths are his fault,” she said. “The police may have pulled the trigger, but he was the one who killed the men of this country of which he is the father.”

Lopez joined dozens of widows and orphans of victims of extrajudicial killings at Christ the King Seminary on Friday to call anew for justice for the thousands of deaths in the President’s antidrug campaign.

That gathering, however, seemed only to amplify her sense of loss. 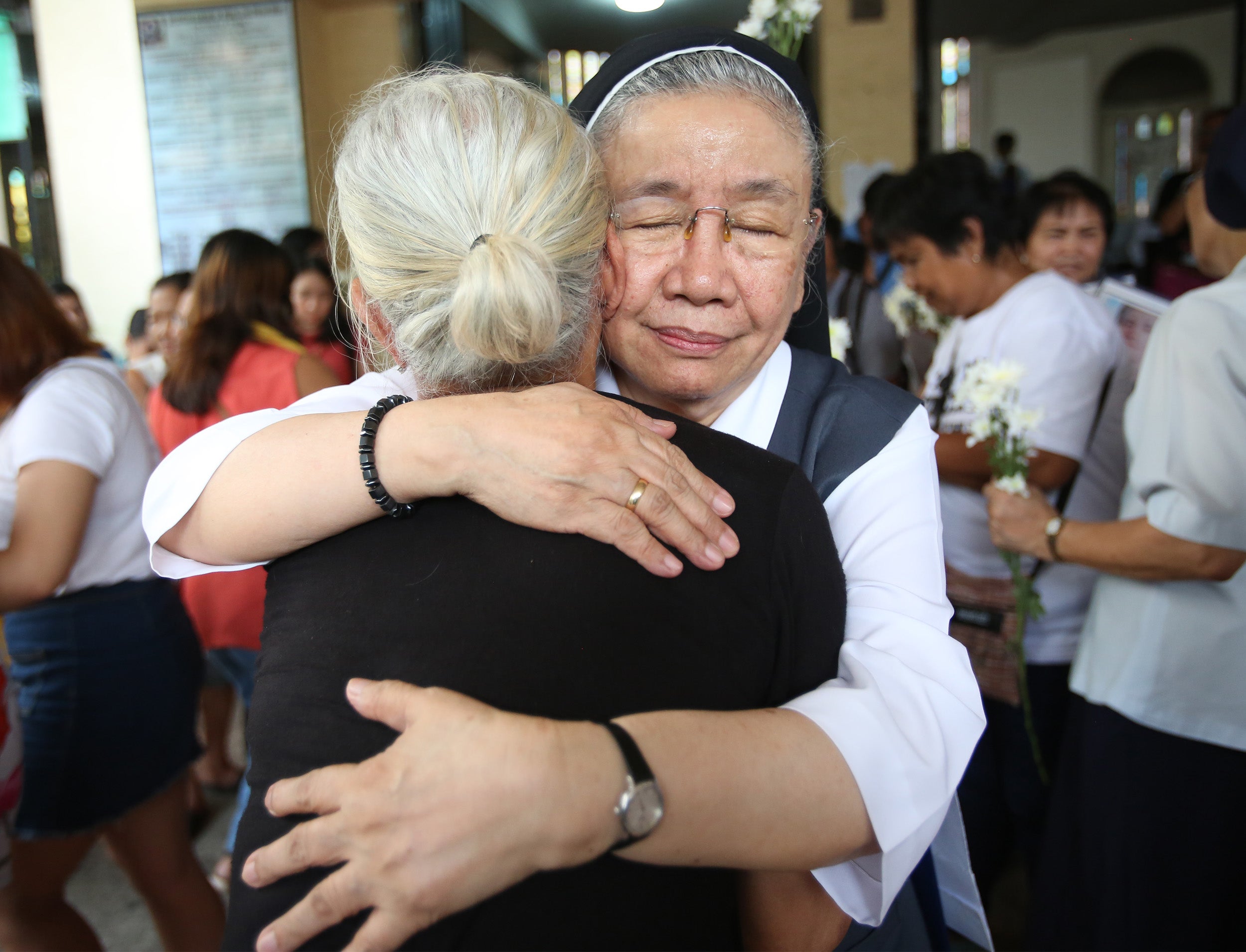 “This fight [for justice] may be the death of me,” Lopez said, adding that she would do “whatever it takes for [the President] to be held accountable for his crimes.”

Most of the families are under the auspices of activist-priests like Fr. Robert Reyes and Fr. Flavie Villanueva. Others are under the care of human and legal rights groups like the National Union of Peoples’ Lawyers (NUPL) and the Free Legal Assistance Group (Flag).

NUPL filed the second ICC complaint against the President in behalf of Lopez’s group.

The complaint included details of how her son was killed on May 18, 2017, when officers caught up with him on the rail tracks and shot him five times at close range despite him raising his hands in surrender and begging for mercy.

“They told me he was still alive when I came running to the crime scene. He moved to the sound of me screaming his name, as if to say, ’Ma, I’m still here,’” she said.

Seven months since they filed the complaint, Lopez remains optimistic that justice will prevail. “I’m willing to wait. While Duterte is here, the deaths won’t stop.”

According to NUPL lawyer Kristina Conti, Article 127 of the Rome Statute states that criminal investigations that began before a country’s withdrawal took effect could still continue.

“The difference of course is that it would be harder because there’s no more incentive for the Philippines to cooperate,” Conti said. “But the ICC could still find [the President] guilty of the charges. It’s still within their jurisdiction.”

Bequelin said the ICC had “ways and means” to investigate, “even if the Philippines will not cooperate with it.”

He urged the United Nations Human Rights Council to launch “an independent, international investigation into the human rights situation in the Philippines, including the thousands of extrajudicial killings still being committed.”

Jacqueline Ann de Guia, spokesperson for the Commission on Human Rights, sees the withdrawal from ICC as a reversal of the country’s commitment to its international treaty obligations and a “step back from the gains” it had achieved in promoting justice and human rights.

She said the government should reconsider its withdrawal from the Rome Statute “as a stronger sign of its dedication to the rule of law and human rights.”

“In the end, it is the Filipino people who [are] bound to lose when they no longer have the recourse in times when local justice systems fail in protecting them. It is then that impunity wins as a consequence of withdrawal,” De Guia said.