MANILA, Philippines – Issues on human rights, press freedom, and rule of law have been raised during the meeting of US Secretary of State Mike Pompeo and Foreign Affairs Secretary Teodoro Locsin Jr.

This was revealed by Pompeo during their joint press conference at the Department of Foreign Affairs (DFA) main office in Pasay City on Friday, even stressing that talking about the issue of human rights with his counterpart has always been part of his travels worldwide. 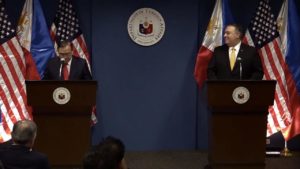 Foreign Affairs Secretary Teodoro Locsin, Jr. and US Secretary of State Mike Pompeo during their joint press conference at the Department of Foreign Affairs main office in Pasay City on Friday, March 1, 2019. Pompeo says he has raised issues on human rights, including press freedom and freedom of speech, and rule of law during his meeting with Locsin. INQUIRER.net/Ryan Leagogo

“I raised with my counterparts the importance of protecting the rights and liberties of all Filipinos including free speech, freedom of the press, and due process under the law,” Pompeo said.

“I did raise the issue of human rights, I do this in my travels, everywhere we go,” he also said.

According to Pompeo, the US never forgets “the importance of human rights, rule of law, transparency, (and) justice.” He also stressed that adherence to the rule of law is essential to America.

“Our expectation for countries to observe the rule of law is fundamental to America,” he said.

Earlier, four members of US Congress have urged Pompeo to discuss concerns about the “assault on civil society, media freedom, and human rights” under the administration of President Rodrigo Duterte during his visit to the Philippines.

READ: 4 US lawmakers call on Pompeo to press for justice in Ressa, De Lima cases during visit