Pompeo: World should be aware of ‘risks’ of Huawei technology

MANILA, Philippines — The world must have its “eyes wide open” to the alleged risks of adopting Huawei’s technology into their telecommunication infrastructure, United States (US) Secretary of State Mike Pompeo said Friday.

Pompeo said competition in 5G and other technologies “should be open, free and transparent.” However, Huawei “is not that,” Pompeo pointed out. 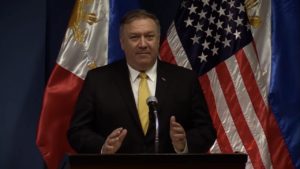 “We believe that competition, whether it’s in 5G or some other technology have to be open, free and transparent and we worry that Huawei is not that,” Pompeo said in a press conference at the Department of Foreign Affairs (DFA) main office in Pasay City.

He said that it has been the task of the US to inform the world of Huawei’s risks as it believed that every nation should make their “own sovereign decision” on adopting the technology of this Chinese telecommunication giant.

“So our task has been to share with the world the risks associated with the technology, the risks to the Filipino people, the risk that America may not be able to operate certain environments if there’s Huawei technology adjacent to that,” he said.

Pompeo added that: “Every nation should have to make their own sovereign decision on how to proceed.”

“We want to make sure that the world has their eyes wide open as to the risks of having that technology as part of infrastructure or backbone of networks that are transiting communication inside of the country and back here around the world, transiting that information internationally as well,” Pompeo also said.

Pompeo insisted that American companies are the “best partners” in infrastructure, development, and digital economy because, he said, they operated with the “highest standrards of transparency and adheres to rule of law.”

However, the US State Secretary said the same could not be said of China state-run companies.

“American companies are the best partners in infrastructure, development, and digital economy because they operate with the highest standrards of transparency and adheres to rule of law,” Pompeo said.

“The same cannot be said on the Chinese state-run or state-backed enterprises,” he added. /jpv