4 US lawmakers call on Pompeo to press for justice in Ressa, De Lima cases during visit 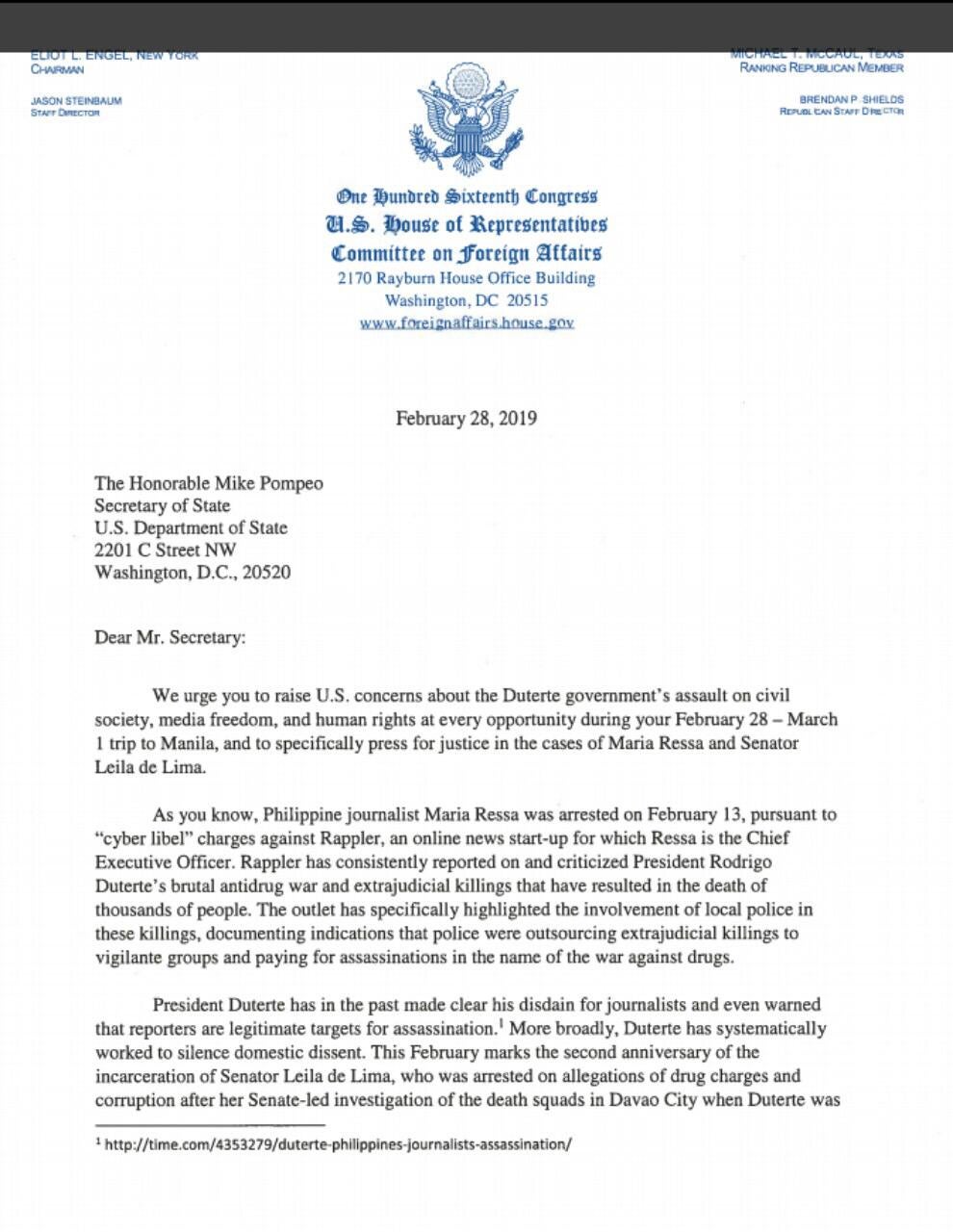 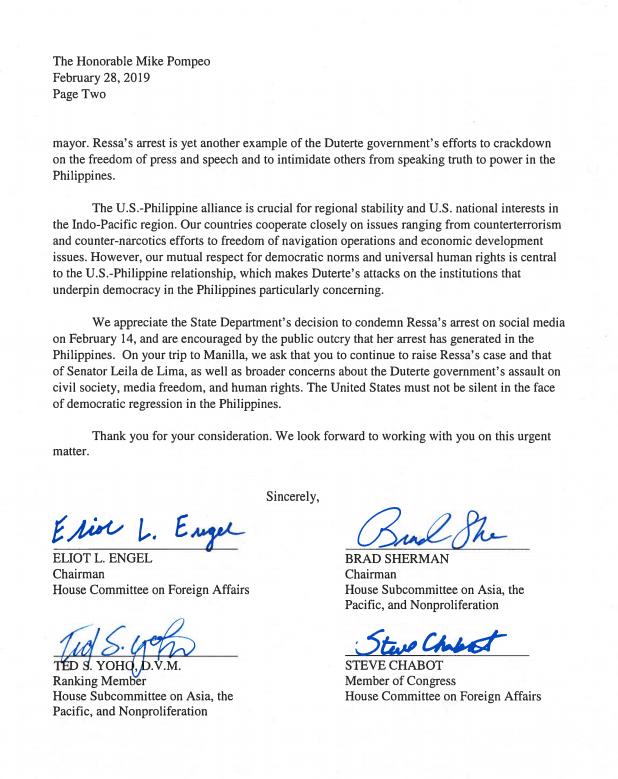 In a letter dated February 28, U.S. House Foreign Affairs Committee Chairman Eliot Engel along with three ranking members of the U.S. Congress urged Pompeo to raise U.S. concerns about the “assault on civil society, media freedom and human rights” by the administration of President Rodrigo Duterte during his trip to Manila.

They specifically urged Pompeo to “press for justice” for the cases of Ressa and De Lima.

“We urge you to raise U.S. concerns about the Duterte government’s assault on civil society, media freedom, and human rights at every opportunity during your February 28 to March 1 trip to Manila, and to specifically press for justice in the cases of Maria Ressa and Senator Leila De Lima,” the letter read.

The concerned U.S. congressmen noted how Ressa was arrested for cyber libel charges on February 13 while De Lima spent her second year in incarceration for drug-related charges.

“President Duterte has in the past made clear his disdain for journalists and even warned that reporters are legitimate targets for assassination,” the letter read.

They also made note of how Ressa’s arrest is yet another example of the  efforts being done by the Duterte administration to “crackdown on the freedom of the press and speech and to intimidate others from speaking truth to power in the Philippines.”

The concerned American congressmen added that the two nation’s “mutual respect for democratic norms and universal human rights” is central to the U.S.-Philippine alliance, noting how the attacks by President Duterte on the institutions that underpin democracy in the Philippines is “concerning.”

While they appreciate the U.S. State Department’s condemnation of Ressa’s arrest, they said the U.S. “must not be silent in the face of democratic regression in the Philippines.”

Pompeo arrived at the Villamor Airbase in Pasay City around 9 p.m. on Thursday. He was welcomed by the President and several members of Cabinet.

READ: US Secretary of State Pompeo arrives in Philippines

US Ambassador to the Philippines Sung Kim said Pompeo and the President had a “very productive meeting” on Thursday night, reaffirming the two nation’s friendship and alliance.

Pompeo’s visit to the Philippines comes amid Duterte’s engagement in warm bilateral ties with China despite China’s aggression in the West Philippine Sea.  /muf

Read Next
US Secretary of State Pompeo arrives in Philippines
EDITORS' PICK
Current dominant strain of COVID-19 more infectious than original—study
Water remains our saving grace right now
EuroMillions Superdraw: A lottery draw unlike any other is coming to the Philippines
DOLE: Return of OFWs’ remains from Saudi to be ‘delayed,’ deadline moved to ‘early next week’
Smart releases Hyun Bin’s second TVC
‘Justice will be done,’ Duterte assures as he vowed probe on Jolo incident to bare ‘truth’
MOST READ
Duterte tells military: No other president looked at you the way I did
Locsin warns of ‘severest response’ if China’s army drills in SCS ‘spill over’ to PH domain
Man who stole 2 cans of luncheon meat lands in jail in Manila
VP Leni Robredo: ‘Remember, you were made for these times’
Don't miss out on the latest news and information.