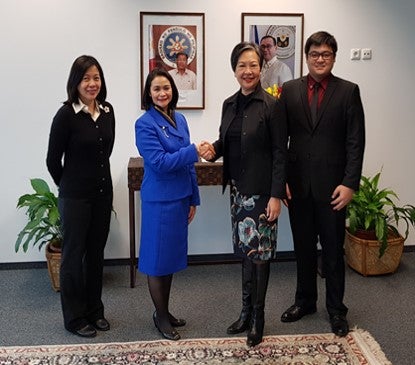 MANILA, Philippines — A Filipina scientist was appointed as one of the directors of the Austria-based International Atomic Energy Agency (IAEA), an international center for cooperation in the nuclear field.

The Department of Foreign Affairs (DFA) reported on Wednesday that Dr. Jane Gerardo-Abaya was appointed as director of IAEA’s Department of Technical Cooperation Asia and the Pacific Division.

Philippine Ambassador to Austria Maria Cleofe Natividad congratulated Abaya during a courtesy call at the Philippine Permanent Mission in Vienna’s chancery on Jan. 18.

Natividad said Abaya’s appointment is a “remarkable achievement” in the efforts of the Philippines in increasing women’s representation at the higher “echelons” of the IAEA.

Abaya has worked with IAEA since 1994. In 2017, IAEA Director General Yukiya Amano conferred to her a “Superior Achievement Award.”

She also garnered a “Balik Scientist Award” and research grant from the Department of Science and Technology (DOST) in 2008.

Her research work on isotope technology and water and geothermal energy resources were contributed to the University of the Philippines-Diliman’s National Institute of Geological Sciences. /jpv