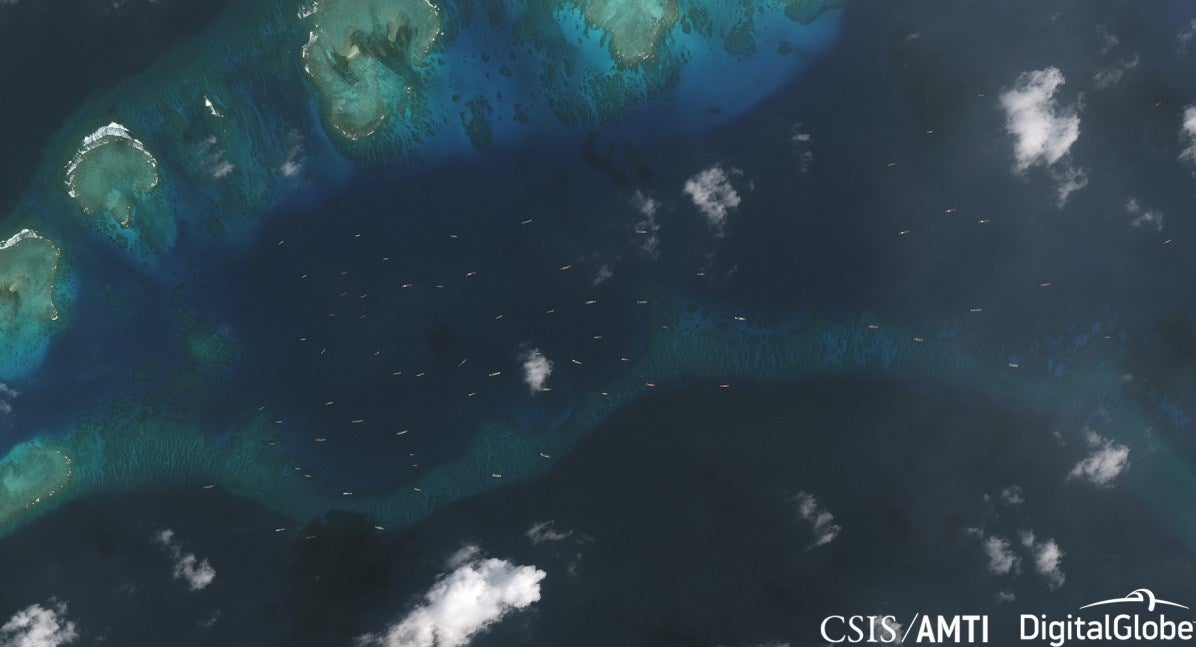 “A handful of Chinese vessels have operated in the area between Subi and Thitu since at least July 2018, likely in response to the initial Philippine effort to start runway repairs last May. But their numbers increased to at least 24 on December 3, just before the current construction operations began,” the Washington-based think tank Asia Maritime Transparency Initiative said in its latest update on Thursday.

“In five subsequent satellite images captured from mid-December to late January, their numbers fluctuate, reaching a high of 95 on December 20 before dropping to 42 by January 26,” it said. 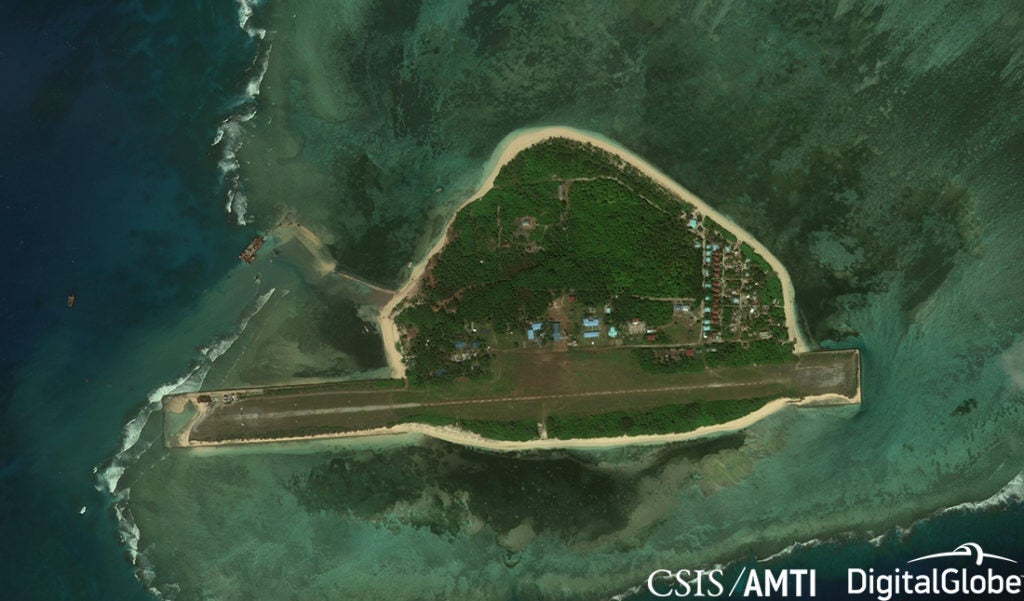 A Dec. 14 satellite image shows a barge anchored off the west coast of Pagasa Island as part of the construction of a beaching ramp./ ASIA MARITIME TRANSPARENCY INITIATIVE

The report said the fishing boats have mostly been anchored between 2 and 5.5 nautical miles west of Pagasa, while the naval and coast guard ships operate slightly farther away to the south and west.

“This deployment is consistent with prior examples of China’s ‘cabbage strategy,’ which employs concentric layers of fishing, law enforcement, and naval vessels around contested areas,” the report said.

An assessment of the AMTI said these vessels are part of China’s maritime militia. These vessels do not actually fish but intimidate other claimants in the South China Sea.

“The fishing vessels display all the hallmarks of belonging to China’s maritime militia, including having no gear in the water that would indicate fishing activity and disabling their Automatic Identification System (AIS) transceivers to hide their activities (for instance, on December 20 only 1 of the 95 or more vessels engaged in the deployment transmitted AIS data),” the report said. 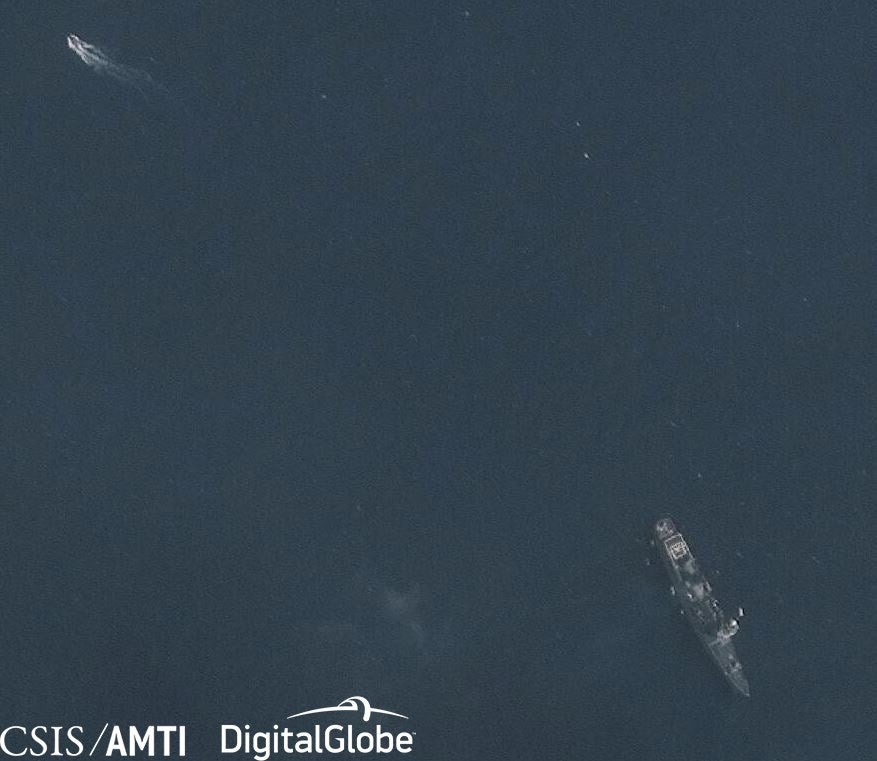 “The drop in the number of government vessels, mirroring the reduction of the militia presence, suggests Chinese forces have settled into a pattern of monitoring and intimidation after their initial large deployment failed to convince Manila to halt construction,” the AMTI noted.

Pagasa is the biggest of the nine Philippine-occupied islands in the Spratlys, inhabited by about a hundred civilians and a small batch of troops.

In April 2017, the Philippine government announced that it will repair the runway on Pagasa and construct a beach ramp or a port to allow ships to bring in construction materials for the building and repair of facilities.

The construction of a beaching ramp on Pagasa had been facing delays due to rough seas, Defense Secretary Delfin Lorenzana said earlier this week. It was supposed to be completed in 2018 but it was moved to the first quarter of 2019.

The AMTI first reported the ongoing construction on Pagasa in May 2018. Based on satellite images, the new construction started on mid-December, as no apparent work was ongoing in imagery taken early December.

“Satellite imagery from December 13 and 14, 2018 show a barge anchored off the west coast of the island with excavators and a bulldozer in the process of depositing and grading sand to extend the small existing causeway to the edge of the reef—presumably creating the beaching ramp referred to by Lorenzana,” the report said. 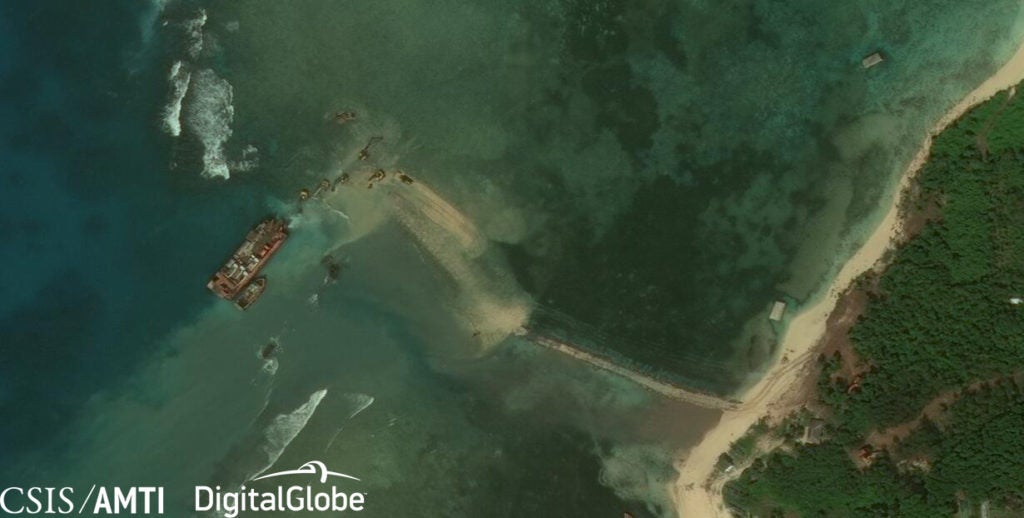 A Dec. 14 satellite image shows a barge anchored off the west coast of Pagasa Island as part of the construction of a beaching ramp. CSIS Asia Maritime Transparency Initiative

But the AMTI said the satellite images from Jan. 11 and 26 this year showed that the reclamation work is more than a simple beaching ramp: “Both images are partially obscured by clouds, but they reveal excavators depositing sand over an area of approximately 8 acres, or more than 32,000 square meters, to the north of the existing causeway.”

The AMTI said the ongoing reclamation work on Pagasa is “much less environmentally destructive method” than China’s massive island-building in the Spratlys and Paracels. It said the Philippines used construction equipment depositing sand shipped in from elsewhere, while China used suction-cutter dredgers to grind up the reef surface and build outposts with the resulting sediment.

Once completed, the AMTI said the Philippines would have created 8 acres of land in the Spratlys, as compared to 120 acres by Vietnam and 3,200 by China.

“Manila appears intent on upgrading its facilities in the Spratlys despite any détente or objections from Beijing. But those plans continue to face delays and their scope is much more modest than those undertaken by China or even Vietnam,” the report read.

Other PH facilities in Spratlys

Other Philippine-controlled islands in the Spratlys also continued to see minor upgrades in the latter part of the year. Between May and November 2018, a lighthouse was built on the western shore of Likas (West York) Island, the AMTI said.

The Philippines announced last year that it plans to build five lighthouses in the West Philippine Sea.

Meanwhile, a Philippine flag was also painted on the roof of a shelter built in Kota Island (Loaita Cay) on Dec. 8 last year, as seen on a satellite image.

“Manila isn’t the first to use roof art to announce its claims to passing planes and satellites. For years, the Vietnamese flag has decorated a large building on Spratly Island, while an even larger Chinese flag is stamped on Triton Island in the Paracels alongside the characters 祖国万岁 (Long live the motherland),” the AMTI said.  /muf/ac