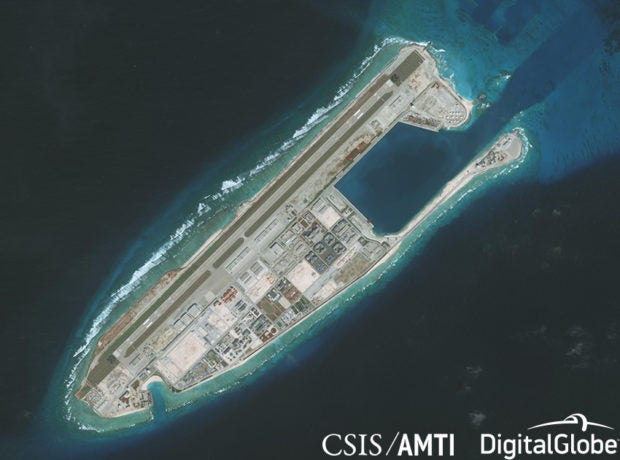 In a Twitter post, Locsin said he would “not contest, but protest” the construction of the rescue center, but preferred to do it on the floor of the United Nations General Assembly.

“And we will. I however preferred engaging them openly on the floor of the UN General Assembly,” Locsin said in his Twitter post.

And we will. I however preferred engaging them openly on the floor of the UN General Assembly. https://t.co/g5WNKVrLUr

“Not contest protest. Not even the US [United States] will contest it,” Locsin added, as he expressed agreement with the position of Supreme Court Senior Associate Justice Antonio Carpio.

Not contest protest. Not even the US will contest it.

Locsin also said he might prepare a “draft of a compulsory draft” to contest Chinese activity on Kagitingan Reef.

“However, if we decide to contest Chinese activity I am preparing a draft of a compulsory draft into the AFP first of media and then maybe others to send into contested zone. We’ll see what happens and if it will be ground for something stronger than a diplomatic protest. No loss,” Locsin said.

Asked if he had verified news of the rescue center’s creation with the Chinese government, Locsin said: “And you expect us to believe Chinese media?”

Locsin added that the Task Force for the West Philippine Sea could verify the Chinese construction.

“Jesus H Christ, I mean, it may be more reliable than native media but Jesus let’s verify it responsibly. We have a Task Force for that,” he said.

And you expect us to believe Chinese media? Jesus H Christ, I mean, it may be more reliable than native media but Jesus let's verify it responsibly. We have a Task Force for that.

On Tuesday, China’s Xinhua reported that China launched a maritime rescue center on one of its artificial bases on the Spratly Islands in the West Philippine Sea.