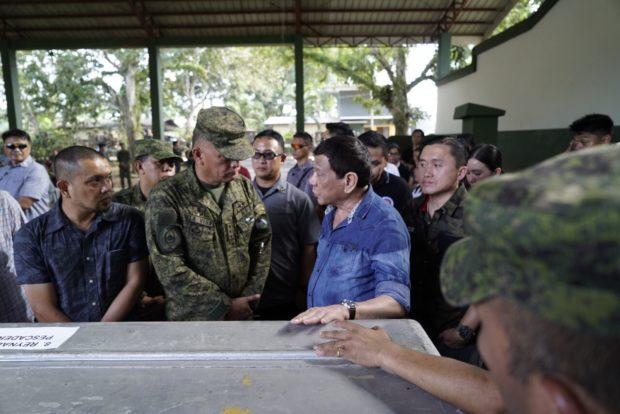 President Rodrigo Duterte talks with Lt. Gen. Arnel de la Vega, chief of the Western Mindanao Command, on Monday, Jan. 28, 2019, during his visit to Jolo in Sulu, a day after two successive explosions hit the Cathedral of Our Lady of Mount Carmel. (Photo by CHRISTOPHER GO)

MANILA, Philippines — The Philippines would not enter into a new military alliance with China and Russia, President Rodrigo Duterte said Monday, a day after twin explosions rocked restive Mindanao on Sunday, causing international concern about the country’s security.

Duterte has turned to China and Russia to seek arms and defense equipment as Manila tries to forge closer ties with the two superpower nations.

But in his speech in Jolo during his visit at the blast site, Duterte said the two nations had never asked anything from the Philippine government in exchange for their defense support to the country.

He said China and Russia didn’t even ask him to have military bases here.

[I’m telling you, you officials, that up to know, neither Russia nor China has asked anything — not even paper or pencils. They never said: Can we put up a base there?]

[The most they ever said was: Look at our ships, mayor. All beautiful. We’re just going to park. Well, everyone will pass here. That’s just for goodwill. That’s true. No military alliances. None. I won’t allow it.]

The President said he would not want to be dictated by anyone, including longtime Philippine ally the United States.

The Philippines and the US signed a Mutual Defense Treaty in 1951.

[I don’t want us to be tied to anyone, not even the Americans. If you allow yourself to get tied, they can ask you now what they want.]

The US had previously voided the arms deal between Manila and Washington following President Duterte’s tirades against America amid his vicious drug war.

[Now I’m displeased. I went to Russia and they gave me arms — for free. For Marawi. So I went to China and told them I will buy arms. Just give me credit. Then I went to Russia, they just gave the arms to me.] /atm