West Philippine Sea 2019: Policies to watch out for 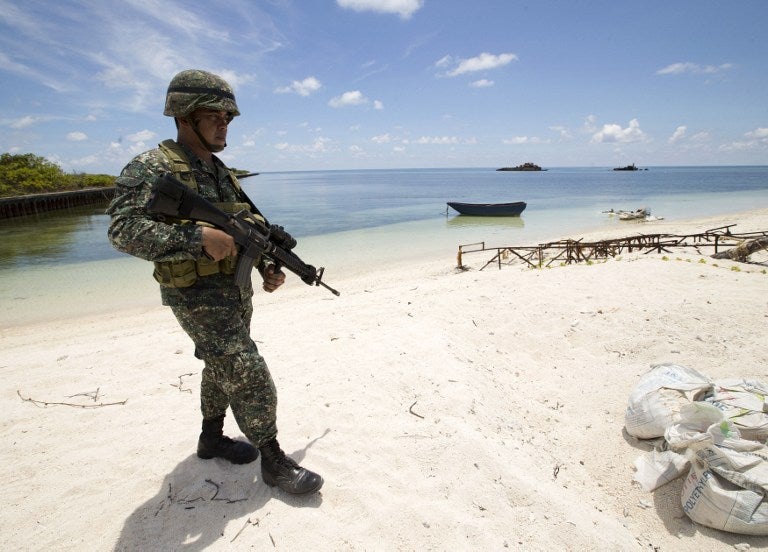 Philippine soldier Tychico Octobre patrols a beach in Pagasa Island (Thitu Island) at the Spratly group of islands in the South China Sea, west of Palawan, on May 11, 2015. The Spratlys are considered a potential Asian flashpoint, and claimant nations have expressed alarm as China has embarked on massive reclamation activity. (AFP FILE PHOTO / POOL / RITCHIE B. TONGO / AFP PHOTO / POOL / RITCHIE B. TONGO)

MANILA — The decision of the Department of Foreign Affairs (DFA) on the request to lift the moratorium covering the West Philippine Sea, the proposed review for the Mutual Defense Treaty (MDT), and the code of conduct negotiations are among the Philippine foreign policy issues that South China Sea observers should watch out for in early 2019, an analyst said.

The Department of Energy (DOE) said early this month they have already asked the DFA to lift the ban after one of the service contractors formally sent a similar request late last year.

The request comes after Chinese President Xi Jinping visited the Philippines in November, where both countries agreed to cooperate on oil and gas development.

The rising tensions on territorial dispute between the Philippines and China prompted the Aquino administration to suspend exploration and drilling activities in the West Philippine Sea.

“Whether the DFA’s more active and engaged leadership will finally relent to the DOE’s long-standing push for resumption of offshore exploration in the West Philippine Sea is the first important foreign policy issue of the new year,” maritime expert Dr. Jay Batongbacal said in a statement for the Foreign Correspondents Association of the Philippines released mid-January.

While the possible resumption of exploration may be interpreted as a turn back from the accommodating attitude toward China, he said this is contradicted by the government’s statements on China’s fishing activities in the West Philippine Sea.

“Presidential Spokesperson Sal Panelo’s assertion that there is no problem with Chinese fishing in the country’s EEZ (exclusive economic zone) and operating from bases in the South China Sea and West Philippine Sea reflect a failure to appreciate the long-term and legal impact of continuing and persistent violations of Philippine exclusive sovereign rights vindicated in the South China Sea Arbitration,” Batongbacal wrote.

“Unauthorized and uncontrolled foreign fishing in the West Philippine Sea should never be acceptable for any reason, if the administration is to be true to its claim that it will not abandon the award and will still raise it at the proper time,” Batongbacal said.

President Rodrigo Duterte has chosen to set aside the landmark ruling of the international tribunal in 2016 that invalidated China’s sweeping claims in the South China Sea, but promised to bring it up before his term ends.

In December, Defense Secretary Delfin Lorenzana raised the intent to review the Philippine-US MDT in relation to the maritime dispute.

It remains unclear in the treaty whether the US would back up the Philippines when push comes to shove in the South China Sea.

“If we offer a quite clear clarification on the MDT scope, it dissuades China because it lays down the red lines that make clear to China where the trigger for US intervention would be,” AMTI director Greg Poling said during the Asia Forecast 2019 forum in Washington last week.

But Batongbacal said the timing of the review should also be carefully considered as the US leadership is currently burdened with its own domestic issues.

Aside from their activities on the high seas, China is expected to use the code of conduct negotiations to assert their expansion in the disputed waters this year.

The Association of Southeast Asian Nations (Asean) and China will resume with negotiations early this year, which the latter earlier proposed to be finished in three years.

In an interview, Batongbacal said negotiations would be China’s “primary venue to push their agenda of getting the region in accepting their dominance in the area and trying to pressure in a way influence Southeast Asian states to discourage further activities by external powers.”

He said it was not impossible for China to achieve this, as “the US has not presented alternatives to their economic incentives in the region.”

The US and China continue to race for supremacy in the western Pacific over trade and geopolitics, leaving Asean member states caught between the two superpowers.

“The Americans seem to be in a state of flux on how they want to approach the region. Their latest iteration of policy is the Free and Open Indo Pacific, it remains more like a rhetoric,” said William Choong, Asia Pacific security analyst at the London-based International Institute for Strategic Studies.

“Apart from saying we are concerned with Chinese behavior; the US has not come up with a counterpoint to China’s belt and road initiative apart from the trilateral arrangements US, Japan, Australia working on some kind of infrastructure projects linking Southeast Asia with Africa. But beyond that we don’t see any kind of equivalent or update to Obama’s pivot rebalance to the region,” he also said.

The US recently passed the Asia Reassurance Initiative Act (ARIA), seen as a diplomatic strategy for allies and partners in the region.

“ARIA is a bipartisan initiative that serves to underscore the US’ longstanding commitment to the region. The figure – $1.5 billion every year for the next five years – for military and diplomatic engagement, among other things, should be encouraging for many regional capitals. It will serve as a foundation for Trump’s Indo-Pacific strategy, which is still relatively undefined,” Choong said.

On the ground, China is likely to continue employing its gray zone campaign in the South China Sea in the months ahead to achieve its strategic objectives, Batongbacal said.

In this tactic, ambiguity or covert actions are used to pursue its objectives short of conventional war.

“They’ll continue to give these islands a softer face to downplay their military purposes. It’s an attempt to look good to create more benign image in the region especially in light of ongoing competition with the US,” the expert said.

In 2018, what caught bigger attention was China’s display of military capabilities through the deployment of anti-ship cruise missiles, surface-to-air-missiles, communication jamming equipment on three of its biggest outposts in the Spratly archipelago.

Other activities include a landing of long-range H-6K bomber on Woody Island in the Paracels in May. Analysts say that China is likely to do the same in the Spratlys eventually.

But given the military developments, Batongbacal said civilian activities such as deployment of weather stations and permanent rescue ship last year should be given a similar concern.

Early this month, China announced its initiative to restore the destroyed coral reefs from its island-building in the Spratly Islands.

The expert noted the gray zone strategy was the “most important change” in China’s tactics in the disputed waters.

“China’s expansion of civilian activities (is) also assertion of sovereign jurisdiction. It’s less intimidating but they’re no less important than the military activities. All of these civilian activities like the search and rescue ship, ecological protection. They are doing it unilaterally and is tantamount to an exercise of civilian administration and control by doing these things,” he said.

“They are still doing it regardless of potential response from Southeast Asian States without respecting their respective maritime zones. What they’re trying to do is to present those islands in a supposedly more benign light. That’s why lately they’ve been trying to exercise the supposed public goods these islands can provide,” he added.

Another gray zone tactic often overlooked is China’s use of its maritime militia. Poling said in a forum in Washington early this month that these fishing fleets engaged in paramilitary work have emerged as the biggest force in the Spratlys.

“The activities of the militia are well-documented—they engage in patrol, surveillance, resupply, and other missions to bolster China’s presence in contested waters in the South and East China Seas,” he said.

Despite rising tensions, it is believed that the possibility of war is still unlikely but Batongbacal said China has shown it is likely to be triggered first.

Lorenzana cited the near-collision of US and China warships in the Spratlys in September as the most worrisome development in the disputed waters last year.

In late August, a Chinese warship came 45 yards and almost collided with the guided-missile destroyer USS Decatur, near one of the features in the Spratly Islands.

The US described it as an “unsafe and unprofessional maneuver” but downplayed the incident.

“I think it’s very concerning because they might go into a shooting war. Since it’s happening here in our backyard we might get dragged into it… Everybody is asking the superpowers to be more careful because we do not want miscalculation. If it can’t be controlled it might escalate into a bigger conflict,” Lorenzana said in December.

Collin Koh, a research fellow specializing in Southeast Asian defense at Singapore’s Nanyang Technological University, said the incident demonstrates that “Beijing has no qualms to assert forceful measures if necessary.”

“And this was possibly the worst such encounters in recent times. So that’s a rather disconcerting situation to see on the one hand, Beijing appearing to offer talks and conciliation, yet, on the other hand, it’s not keen to tone down on its activities business as usual in the South China Sea,” Koh pointed out.

The US regularly sails its warships on the strategic sea route to challenge China’s claims of sovereignty over the entire South China Sea.

“Because of the US focus in carrying out FONOPs (freedom of navigation operations), the equal and opposite reaction by the Chinese and the fact the FONOPs are near or in territorial waters surrounding the occupied features, it could lead to accidental or inadvertent escalation which would not regional states would welcome,” Choong said.

Despite China’s objections to these operations, the US has remained undeterred, but Koh believes there should be more strategy beyond FONOPs.

“I believe the US will stay engaged, be it diplomatically or through the existing slate of defense and security engagements with regional countries. But in keeping China in check, moves beyond FONOPs and routine military presence can be conceived. One good way to do it is of course not to do it alone,” he said.

“The ASEAN-US maritime exercise is to demonstrate that nobody is going to allow one party to dominate the South China Sea. Besides, we would expect US allies and partners to chip in with their own presence operations or in concert with the US forces. These may not necessarily compel China to roll back, but these may still be helpful in deterring China from upping the ante with more incendiary actions,” he also said.