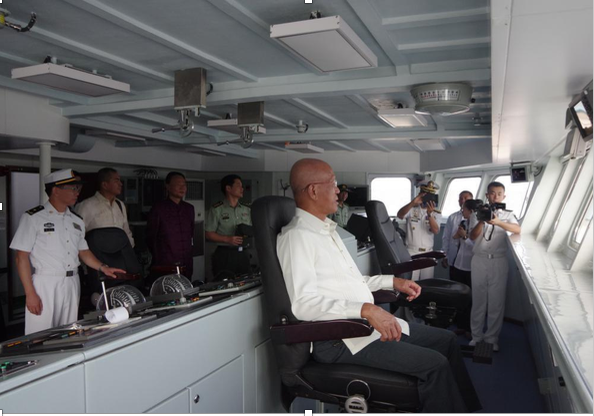 MANILA — For the first time, the Philippine Navy will send one of its vessels to the international fleet review hosted by China.

Navy chief Vice Admiral Robert Empedrad told Inquirer.net on Monday that they are already in the planning stage of sending a ship to China for the event scheduled in April.

This would be the first time that the Philippines would send its ship for China’s international fleet review, which would also mark the 70th founding anniversary of the Chinese navy. Reports say it be held on April 23 off the city of Quingdao.

Empedrad joined Defense Secretary Delfin Lorenzana on Sunday’s tour aboard guided-missile frigate Wuhu (539), one of the three Chinese warships on a five-day visit to the Philippines.

“It was most educational. They came in friendship and the least we can do is offer them our vaunted hospitality. We too shall be sending some of our ships to visit China within the year,” Lorenzana said.

He said the sending of ships would be part of the “confidence-building activities” of both countries.

Chinese guided-missile frigate Handan (579) and replenishment ship Dongpinghu (960) of the People’s Liberation Army (PLA) Navy arrived on Thursday along with Wuhu at Pier 15 in South Harbor.

The visit is the second port call of China in the Philippines under President Rodrigo Duterte.

Lorenzana received a briefing about the People’s Liberation Army Navy and the escort missions of ETG 539 in the Gulf of Aden and the waters off Somalia, the Chinese Embassy in Manila said in a statement.

Last year, the Philippine Navy sent a 200-man contingent to China to participate in the first ever Asean-China maritime exercise.

Both the Philippines and China are maritime adversaries over the South China Sea, where they have overlapping claims. Brunei, Malaysia, Vietnam and Taiwan also claim parts of the strategic sea route.

China insists it owns almost all of the South China Sea, including waters close to the shores of the other claimants in the strategic waterway, despite the Permanent Court of Arbitration ruling in 2016 that invalidated these claims.

Relations between the Philippines and China had grown closer under the leadership of Duterte, who pushed for stronger ties with China while veering away from its traditional allies like the United States. He also downplayed the 2016 ruling in exchange of economic investments from the Asian giant.

While the relationship of both countries present an image of stability on the surface, China continues its expansion and military operations in the South China Sea. /je