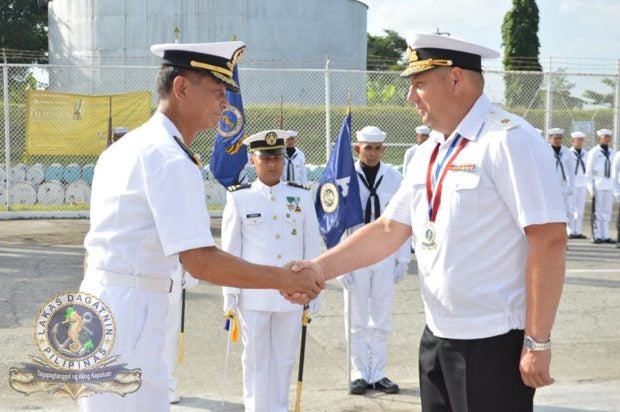 MANILA, Philippines — The Russian Navy visited for the first time a Philippine Navy base in Cavite as part of its 5-day goodwill visit.

The Philippine Fleet said in a Facebook post that it rendered arrival honors to Rear Adm. Eduard Mikhailov, chief of staff the Russian Submarine Forces of the Pacific Fleet at its headquarters in Sangley Point on Thursday.

The Russian contingent also visited the headquarters of the Naval Special Operations Group located in the same naval base.

Participating troops from the Philippines and Russia also completed an obstacle course at the NAVSOG school to highlight the ties between the navies of the two countries.

The Russian Navy’s visit was “a first in the 80 years existence of the Philippine Fleet.”

Russia’s anti-submarine ship Admiral Panteleyev (DDG-548), guided-missile cruiser Varyag and sea tanker Boris Botuma docked at the South Harbor from Jan. 6 to 11, for the 5-day port call. It was the first batch of foreign navy ships to visit the Philippines this year.

On Tuesday, the Russian Navy hosted a reception attended by members of the diplomatic corps, defense and military officials, and other guests.

“We always appreciate our Philippines honorable guests and friends for their kind attention to events that we held in Manila,” the Russian Embassy in Manila said in a Facebook post.

The pivot to Russia, a non-traditional ally of the Philippines, is part of the so-called independent foreign policy of President Rodrigo Duterte.  /muf

Read Next
DFA: Sri Lanka President to visit Philippines on Jan 15-19
EDITORS' PICK
A laptop that maximizes your WiFi so you can maximize your productivity
Why Tagle is a leading papal contender
In Borongan, nuns play hoops (not mahjong)
Powered by style, innovation and passion
House energy committee chair Arroyo bats for cheap electricity
KWF has no power to ban, censor written works – Lagman
MOST READ
Why Tagle is a leading papal contender
Arjo Atayde reveals proposal to Maine Mendoza was ‘more than a year’ in the making
SRA officials should resign after ‘illegal sugar order’ – Zubiri
Gilas gets solid core with Clarkson, Sotto planing in
Don't miss out on the latest news and information.