Moon Jae-in is our Person of the Year 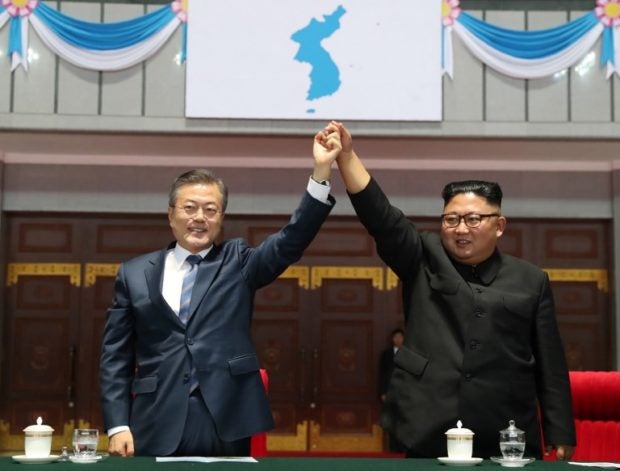 North Korean leader Kim Jong Un (right) and South Korean President Moon Jae-in (left) gesture as they watch the large-scale gymnastic and artistic performance at the May Day Stadium in Pyongyang on September 19, 2018, after their summit. AFP

Moon Jae-in is our Person of the Year. For more on the finalists and runners up, please click this link here.

In a few decades, when people look back on 2018, perhaps they will only remember one or two major headlines.

In the field of diplomacy, they may remember the meeting between President Donald Trump and Chairman Kim Jong-un.

If this were to happen it would be one of the biggest injustices of selective history and memory.

Because without South Korean President Moon Jae-in’s insistence, persistence and patience, the Trump-Kim summit would never have happened. No Moon – Kim summit, no Trump – Kim summit.

A period of tension

If we think back to the tail end of 2017, the headlines that was taking place in and around the Korean Peninsula highlighted a region that was on edge.

Trump had antagonized Pyongyang with a series of tweets including comparing his rocket size to Kim, calling the chairman a ‘little rocket man’ and threatening nuclear destruction of North Korea.

Pyongyang responded by calling Trump a “dotard” and questioning his mental stability.

The world watched with anxiety as it moved a little closer to a nuclear conflict, the doomsday clock inched towards midnight.

Remember how much panic there was in January in Hawaii when nuclear raid sirens went off accidentally. The world seemed to teeter on the brink.

The reason that Moon Jae-in is our person of the year is because he single-handedly disarmed the powder keg that had been primed.

Moon reached across the border when it was not popular or politically prudent to do so.

His insistence on inviting and meeting with the North Korean delegation at the Olympic Games slowed down tensions and opened room for negotiations.

His administration, at his insistence, worked tirelessly to assuage any paranoia the North had. It finally culminated in a historic meeting between the leaders of the two Koreas at the demilitarized zone.

When they did meet on the DMZ Moon did not hesitate to accept Kim’s invitation to ‘step over the line’ into North Korean territory knowing full well that there were symbolic repercussions.

The good will between the two leaders seem genuine too with Moon later returning the favour by becoming the first South Korean president to visit Pyongyang since Roh Moo-hyun a decade prior.

That is not to say that Moon has turned his back on the United States. The president has repeatedly maintained that the US has an important part to play in bringing peace to the Korean peninsula, even when it was not necessary for him to do so.

Seoul signed off on the Trump – Kim summit in Singapore and took a back seat to the whole affair knowing that Trump’s vanity meant that he had to take center stage and that the US President would demand full credit for the de-escalation of tensions.

When US media hyperbolized about a possible Nobel peace prize for Trump, there was only encouragement from Seoul.

Person of the year

While it should be mentioned that Moon has a complicated legacy at home, his poll numbers have fallen on the back of several unpopular economic and energy policies. It should not in any way tarnish the legacy that he has built up in 2018.

Moon wins ANN’s person of the year not just because he single-handedly deescalated tensions when they were at an all time high on the peninsula. Moon wins it because he reminds us that patient non-zero-sum diplomacy still has a place in this world. In an age where leaders are increasingly boisterous, vainglorious and quick to act, that is perhaps more important than ever. /ee