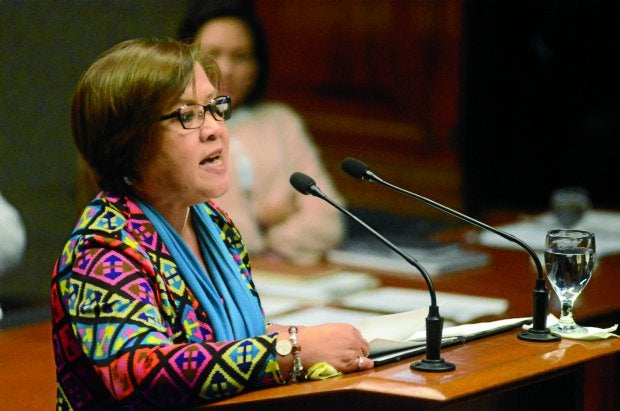 MANILA, Philippines – Sen. Leila de Lima hailed Thursday the United States Senate’s approval of Asia Reassurance Initiative Act (ARIA), which she said would help “in the fight for democracy, human rights and rule of law” in the Philippines and in Asia.

In a statement, De Lima said the bill would “give impetus to the fight against violations of human rights and democracy not only in the Philippines but also in [the] whole Indo-Pacific region.”

The bill, authored by Republican Senator Cory Gardner of Colorado, laid down a policy framework “to demonstrate U.S. commitment to a free and open Indo-Pacific region and the rules-based international order.”

“During these times when our national voice on human rights concerns has been largely silent, the passage of the Senate Bill 2736 in the US can play a crucial role in the fight for democracy, human rights and the rule of law in the country and the whole of Asia,” she said.

De Lima commended the US Senate, and the numerous organizations which lobbied for the passage of the measure, “for boldly addressing the worsening human rights situation globally, including the extrajudicial killings under the rule of President Duterte who focuses on his deadly anti-narcotics campaign while kowtowing to his Chinese masters.”

The senator, one of President Rodrigo Duterte’s fiercest critics, is detained at the custodial center of the Philippine National Police in Camp Crame for drugs charges.

In her statement, De Lima, a former human rights chair, said: “ARIA seeks to demonstrate the US commitments to the region and for a rules-based international order, advancing its interests and goals, including substantive US resource commitments.”

She said, “one of the key features of this powerful legislation is it authorizes US sanctions against human rights abusers.”

Duterte has received global criticisms for his brutal war on drugs and anti-criminality campaign, which various groups said has violated human rights.

But the Philippine President has vowed to remain “unrelenting” in his campaign against illegal drugs and criminality.