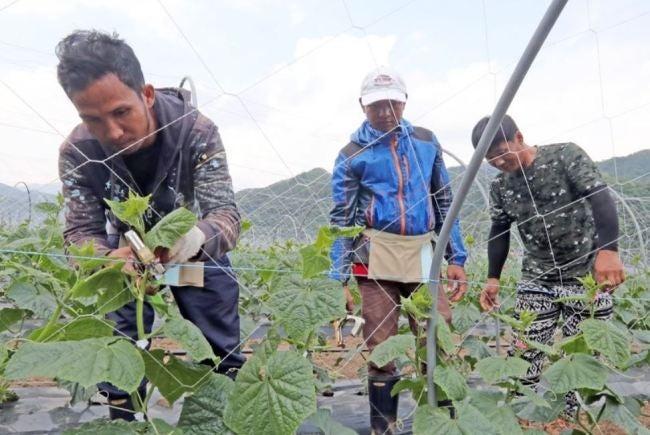 Photo via THE KOREA HERALD

SEOUL — South Korea will accept 56,000 foreign workers under the Employment Permit System in 2019, the same number as this year, in a bid to relieve a labor shortage in the country.

The government decided on the job quotas Tuesday at a meeting chaired by Noh Hyeong-ouk of the Office for Government Policy Coordination.

Under the plan, Korea will accept 43,000 newcomers and 13,000 returnees — 2,000 fewer newcomers than in 2018 and 2,000 more returnees. Under the EPS, a foreign worker can work in Korea for up to four years and 10 months on an E-9 visa, but cannot leave and re-enter the country on the same visa during that time. After four years and 10 months, E-9 holders who meet certain conditions are eligible to leave and re-enter the country to return to their previous employers.

The plan reflected industries’ demand for foreign workers and the estimated number of foreign workers likely to return to their home countries in 2019, the Labor Ministry explained.

About 28,880 new foreign workers will enter Korea in January, April, July and October to work in the manufacturing industry, with 60 percent starting work in the first half of 2019.

To allocate workers most efficiently across sectors, the government will decide where to allocate 4,000 new foreign workers after reviewing employment figures for different sectors for the first half of 2019.

Meanwhile, the number of workers permitted to stay on H-2 visas will remain unchanged at 303,000. People of Korean descent from China and Russia who enter Korea on H-2 visas can seek employment at businesses that have special permits to employ H-2 holders.

“The final decision was made to ease the labor shortage in (Korea’s) industrial sectors and to protect local workers’ jobs at the same time,” Noh said.

Since 2004, Korea has accepted low-skilled migrant workers from 16 countries via the EPS in response to labor shortages at the country’s farms, fisheries, and small and medium-sized companies. The number of foreign workers in the EPS gradually increased after 2014 and peaked in 2016 at 58,000.

Workers who enter Korea via the EPS can exercise basic labor rights and receive the same benefits as local workers. But the system has drawn criticism as it restricts the workers to just three changes of workplace.