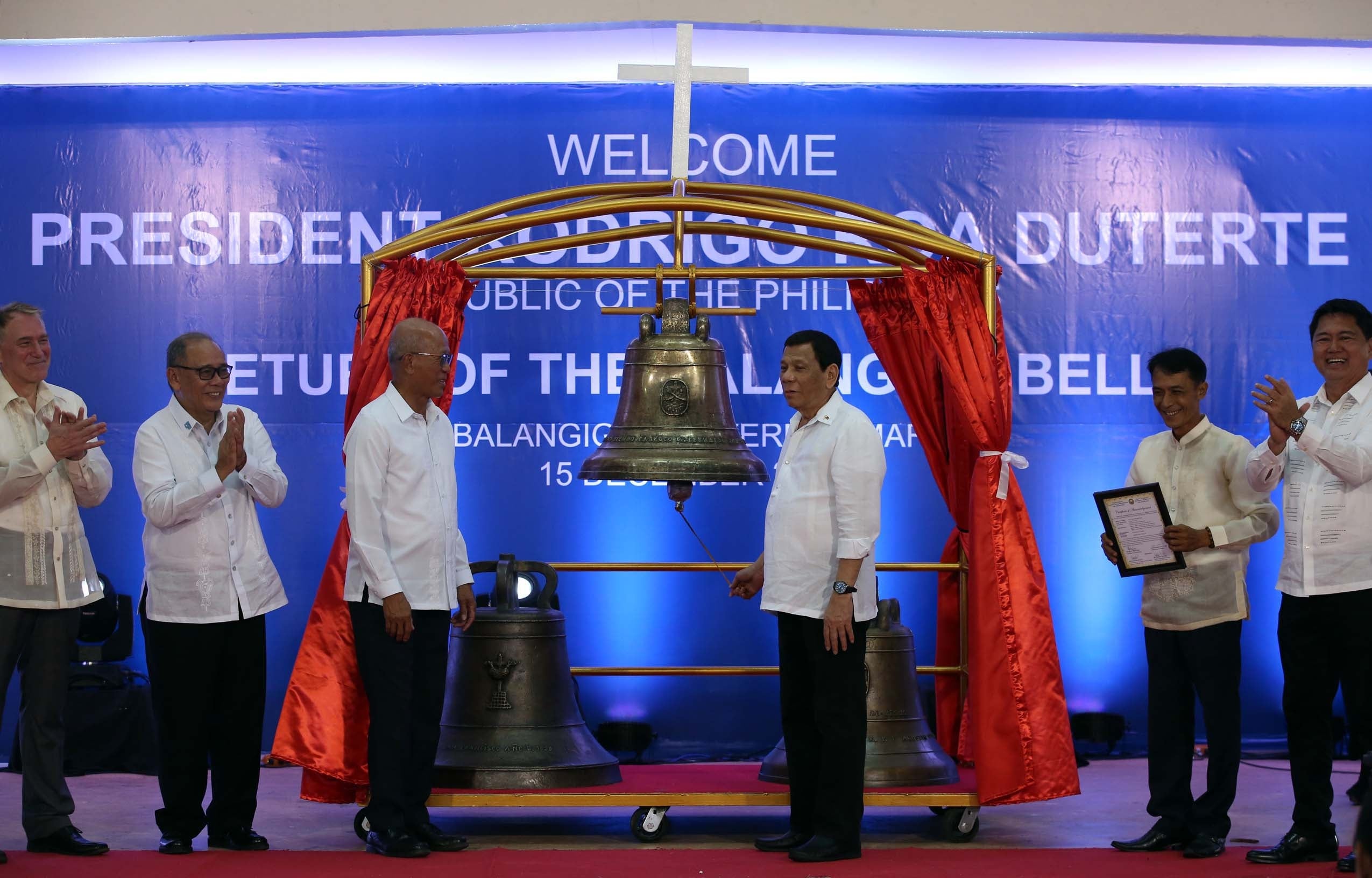 A NEW CHAPTER BEGINS President Duterte prepares to ring one of the three Balangiga bells after his speech crediting both the Philippines and the United States for the return of the artifacts. —PHOTOS BY LYN RILLON

BALANGIGA, Easter Samar — President Rodrigo Duterte on Saturday credited both the Philippines and the United States for the return of the Balangiga bells to their rightful home in Eastern Samar, and said the historic event meant renewed and more vibrant ties between the two allies.

The sleepy town of Balangiga erupted in joy as the President later kissed one of the iconic bells and rung it seven times.

The President has had a testy relationship with the United States, often lashing out at the Philippines’ longest defense ally for its criticism of his war on drugs and human rights record while cozying up to China.

After taking office in July 2016 was marked by moves to split from the country’s former colonial master.

As he led Saturday’s turnover of the bells to Balangiga Mayor Randy Graza and Eastern Samar Gov. Ferdinand Picardal, the President emphasized that no single entity could claim credit for the historic moment.

The return of the bells is due to the “fervent prayers of the entire Filipino nation,” he said. 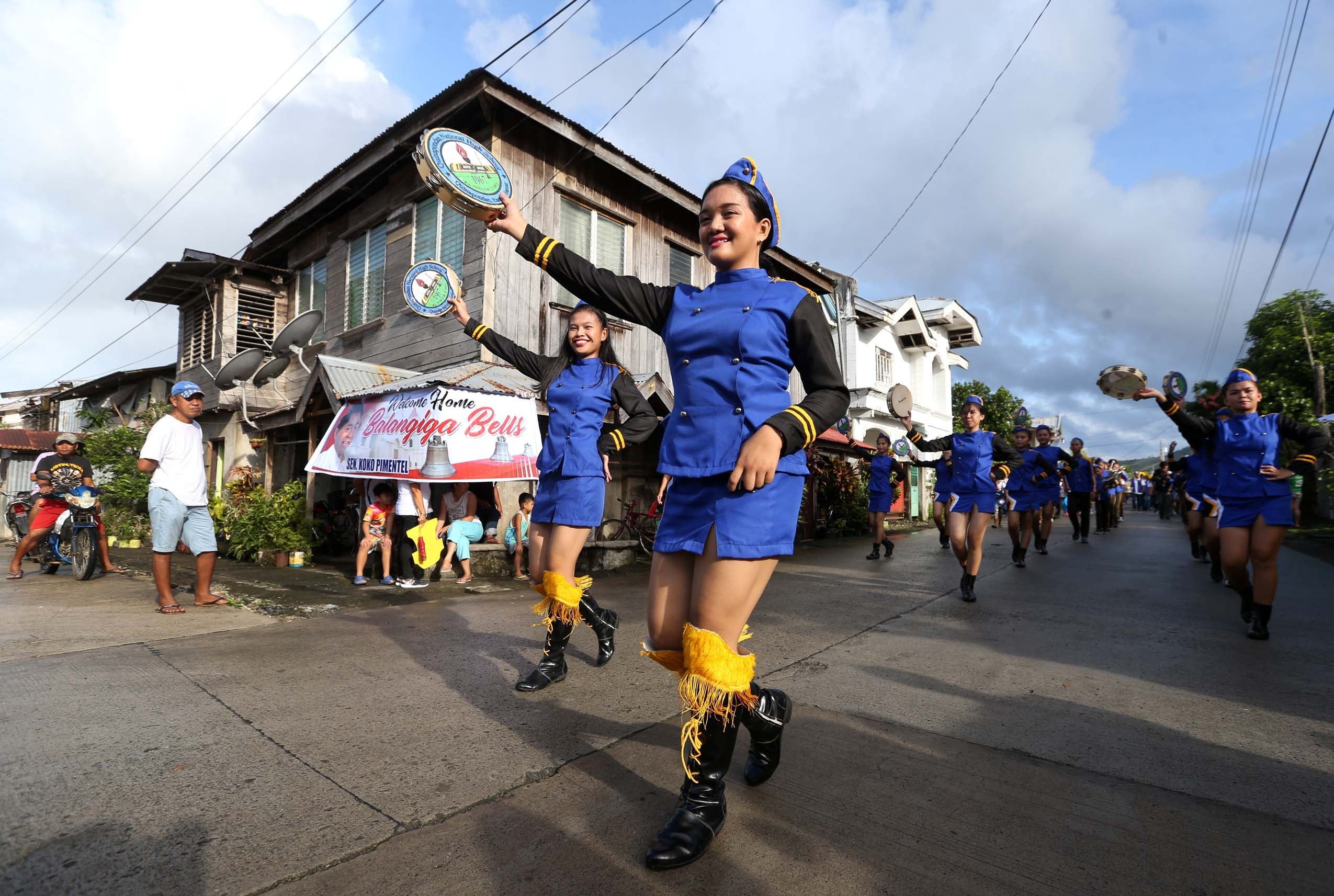 “Nobody, but nobody, can claim a singular credit for the generous act of the Americans. The bells are returned, credit goes to the American people and to the Filipino people, period,” he said, striking a rare positive tone regarding the Philippines’ former colonial master.

American troops carted away the bronze bells as trophies, after razing the town and killing potentially thousands of Filipinos, in reprisal for a surprise 1901 attack that left 48 of their comrades dead.

Filipino males who were at least 11 years old were killed after US Gen. Jacob Smith told his soldiers to turn Samar into a “howling wilderness.”

In his six-minute speech, the President thanked the US government and said the development marked a new chapter in US-Philippine relations.

“The homecoming of these artifacts is truly a milestone in the shared and meaningful history of the US and the Philippines, and heralds a new and more vibrant chapter in our bilateral relations,” he said.

Saturday’s gathering in Eastern Samar was “truly sentimental,” he said, noting that getting the bells back home had not been easy.

“We know fully well that several efforts to return the bells had been made by both America and the Philippines. It had been indeed a long and tedious process, to the point that the outcome was disappointing sometimes,” the President said. 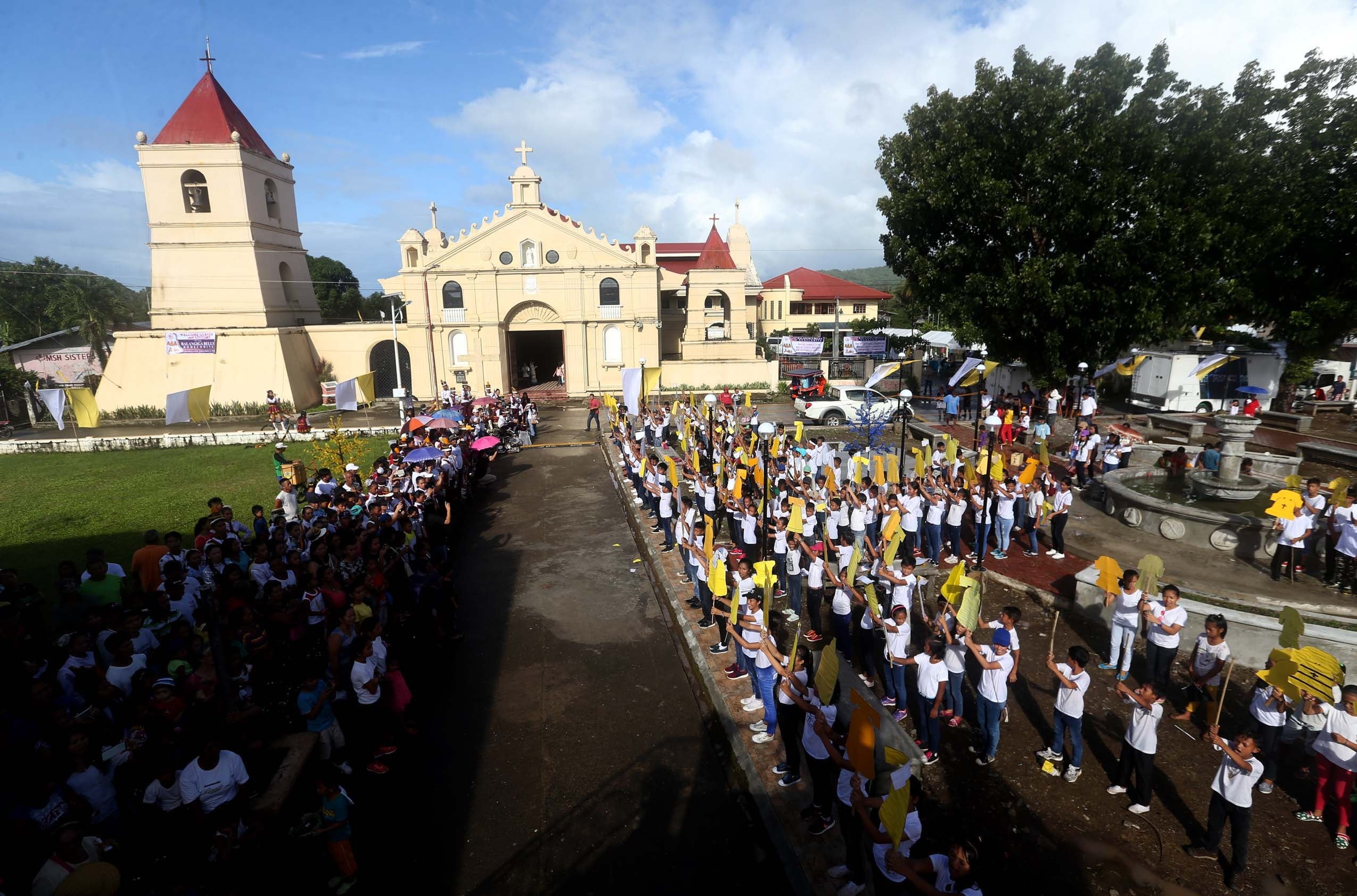 A STORY FOR THE AGES Schoolchildren gather for a performance in front of Balangiga’s St. Lawrence the Martyr Parish Church, which will receive the bells. —LYN RILLON

The country had pushed for the bells’ return since at least the 1960s with backing from past presidents, the Church and supporters in the United States.

In a 2017 speech, the President bluntly called on Washington: “Give us back those Balangiga bells. They are not yours.”

But the repatriation was long held back by some US lawmakers and veterans who viewed the bells, two of which were in the US state of Wyoming and the third at a US Army base in South Korea, as tributes to fallen soldiers.

A confluence of factors earlier this year, that included a key veterans’ group dropping its opposition, culminated in the bells landing in Manila aboard a US military cargo plane on Tuesday for a solemn handover.

For the people of Balangiga the bells are a symbol of the country’s long struggle for independence, and a dark chapter, which is the subject of an annual reenactment and remembrance event.

“It’s not just me but the whole town is walking in the clouds because the bells are finally with us,” 81-year-old Nemesio Duran told Agence France-Presse (AFP). “We are the happiest people on Earth now.”

Duran is descended from the boy who rang one of the bells, long said to have signaled the attack on the Americans 117 years ago.

The President said the bells were also a significant element in the country’s religious and historical narrative and urged the people to take care of them.

“I therefore trust that our ‘kababayan’ (countrymen) in Balangiga and the rest of the country will ensure the protection of these gems. I will continue to preserve and promote our culture and history,” he said.

The President, who arrived at the town center for the ceremony an hour behind schedule, also congratulated the Filipino people for a history they could be proud of.

“I am sure our ancestors are celebrating with us here on this remarkable victory, and that does not only bring back the glory of the town of Balangiga, but also contributes to the full restoration of our dignity as a Filipino,” he said.

After ringing the bells, the President elicited laughter and applause by saying, “What’s next? Dadalhin ko (I’ll take the bells with me)?”

While waiting for the President’s arrival, Defense Secretary Delfin Lorenzana acknowledged the presence at the ceremony of Cabinet secretaries, US officials, Filipino and American war veterans and local executives.

When he arrived, the President shook hands with Catholic Church officials, including Papal Nuncio Gabriele Caccia, Archbishop Romulo Valles, president of the Catholic Bishops’ Conference of the Philippines; Bishop Crispin Varquez of the Borongan [Samar] diocese, Archbishop Timothy Broglio of the US military ordinariate and parish priest Fr. Serafin Tybaco. 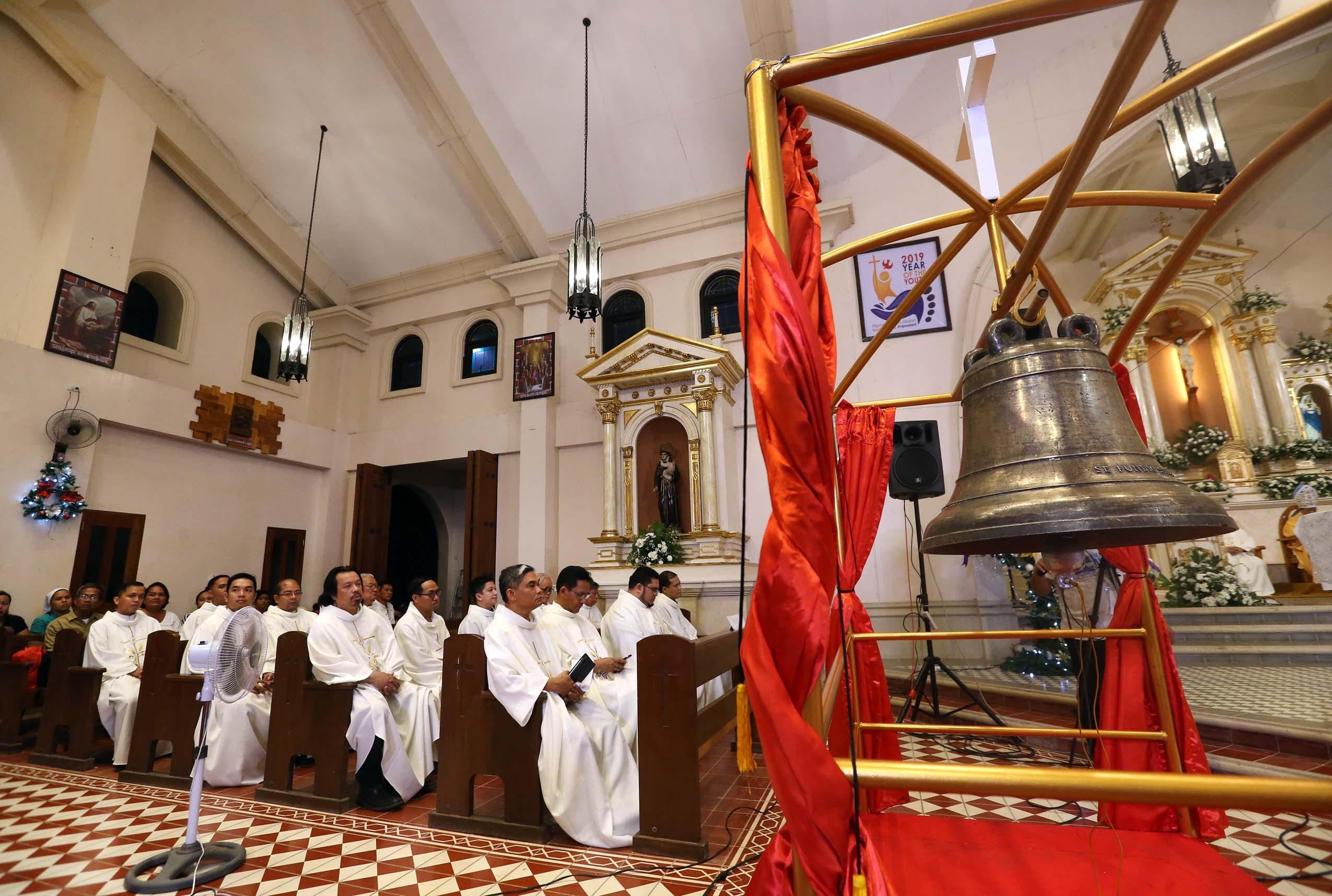 SOLEMN AND HISTORIC Some of the 50 or so Catholic bishops and priests take part in the thanksgiving Mass after the President’s departure.

As the President looked on, the US Embassy’s deputy chief of mission, John Law, handed the certificate of turnover to Lorenzana, who passed it on to Mayor Graza.

The mayor later turned over the bells to the parish, St. Lawrence the Martyr Church.

The President, along with his former longtime aide, Christopher “Bong” Go, left the venue before the thanksgiving Mass for the Daniel Z. Romualdez Airport in Tacloban City for the flight to Davao City.

The Mass was officiated by Varquez, assisted by Bishop Leonardo Medroso and Bishop Rex Ramirez, a native of Balangiga who now heads the Diocese of Naval in Biliran province. Some 50 priests from the Borongan diocese also attended.

Cyril Lukban, a great-great grandson of Gen. Vicente Lukban, the leader of Filipino guerrillas in Samar, said everyone in Balangiga was grateful for the bells’ return.

“If the bells were used before to signal an attack, these bells now symbolize unity between the Philippines and the United States,” said Lukban, a 52-year-old businessman.

The handover ceremony took place far from the town plaza that holds a monument with statues of the American soldiers having breakfast as the Filipino revolutionaries raise their machetes at the start of the 1901 onslaught. —With a report from AFP